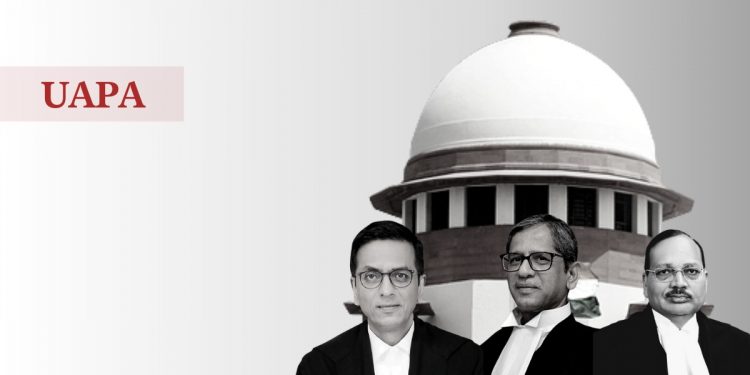 THE Supreme Court Wednesday issued notice to the Tripura police on a petition filed by three persons, accused by state police under the stringent Unlawful Activities (Prevention) Act (UAPA), seeking to quash the First Information Report (FIR) against them for their tweets and comments in social media on the recent violence in Tripura targeting minorities.

A special bench of Chief Justice of India (CJI) N.V. Ramana and Justices D.Y. Chandrachud and Surya Kant also directed that no coercive action would be taken against the accused persons in the meantime.

The petitioners have challenged the constitutional validity of Section 2(1)(o) read with Section 13 and Section 43D(5) of the UAPA. Advocate Prashant Bhushan appeared for the petitioners.

Section 2(1)(o) defines “unlawful activity”, in relation to an individual or association. Section 13 provides for punishment for ‘unlawful activity’, and Section 43D(5) makes the grant of bail impossible if on a perusal of the case diary or the report made under Section 173 of the Criminal Procedure Code(CrPC), the court is of the opinion that there are reasonable grounds for believing that the accusation against such person is prima facie true.

Advocates Mukesh and Ansarul Haq Ansari and journalist Shyam Meera Singh were booked by the Tripura police for speaking on social media about the targeted political violence against the Muslim minorities in the state.

The plea contends that if the State is allowed to criminalize the very act of fact finding and reporting – and that too under the stringent provisions of the UAPA, in which anticipatory bail is barred and the idea of bail is a remote possibility – then the only facts that will come into the public domain are those that are convenient to the State due to the ‘chilling’ effect on the freedom of speech and expression of members of civil society.

“If the quest for truth and reporting thereof itself is criminalized then the victim in the process is the idea of justice”, the plea states.

A four-member fact-finding team of advocates, including Mukesh and Ansari, had visited some of the affected regions in Tripura between October 30 and November 1. On the basis of their interaction with the persons affected by the violence and visit to sites where attacks on mosques had occurred, they released a fact-finding report titled “Humanity Under Attack in Tripura #Muslim Lives Matter”, published by Lawyers for Democracy, at the Press Club of India, New Delhi recently.

A day after the report was made public, the Tripura police registered an FIR against “unknown persons”, and subsequently issued Section 41A notices under the Code of Criminal Procedure to Mukesh and Ansari on the same date as per which they had to appear before the Tripura police on November 10. The FIR was registered under Sections 153A, 153B, 469, 471, 503, 504 and 120B of the Indian Penal Code, and Section 13 of the UAPA.

The plea asserts that such a notice is ex facie an attempt to curb the free flow of information from the riot-affected areas, given that there is nothing in the report which even remotely supports any secessional activity, or questions the sovereignty or territorial integrity of India, or causes any disaffection against the State of India. It says ingredients of the definition of ‘unlawful activities’ under section 2(1)(o) of UAPA are not even remotely made out.

The plea, in addition, points out that the recent FIR against 102 social media posts, which are alleged to have intended to cause communal disharmony and lead to disaffection against the State, is another instance of the police’ highhandedness. The notice issued by the police calling upon Mukesh and Ansari to delete the offensive posts is curious because no posts referred to in the FIR have in fact been made by them.

In so far as journalist Shyam Meera Singh is concerned, the petition states he tweeted, “Tripura is burning”. He too has been named in the FIR and his post is at Serial No. 60 of the 102 social media posts referred to in the FIR.

“His tweet was factual reporting of what was in fact being reported by major news media on 27.10.2021 and by no stretch of imagination can be construed to attract the stringent provisions of UAPA and amount to an “unlawful activity”, the plea asserts.

On October 26, a protest rally was organized by Viswa Hindu Parisad in Panisagar subdivision, North Tripura District. The protest rally was organized against the attack on Durga Puja pandals and Hindu temples in Bangladesh. During the protest march, communal clashes broke out. There have been allegations and counter-allegations even as multiple FIRs were lodged in the matter.

The Tripura High Court on October 29 took suo motu cognisance of the violence and directed the state government to submit a report to it of the preventive measures the authorities have taken so far to end the violence.

It called upon all political parties to participate fully in the peace process so that the confidence of the people of the state can be restored, and the underlying strife that exists can be suitably dealt with.