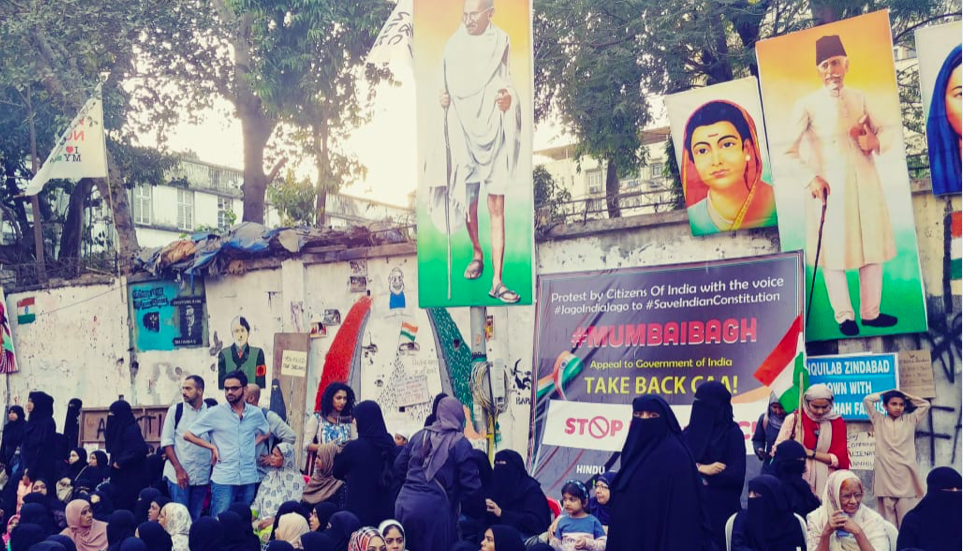 Since January 26, 2020, women of Nagpada and nearby areas are protesting 24×7 against unconstitutional Citizenship Amendment Act, 2019 (CAA) and communal National Population Register (NPR) and National Register of Citizens. The aim is to continue with the protest till CAA, NPR and NRC get rolled back.

Currently, around seven hundred 24×7 sit-ins similar to Delhi Shaheen Bagh are being witnessed in India but Mumbai bagh is unique in its resistance. The women in Mumbai bagh are facing police harassment on a daily basis. The police torture has gone to the extent of not allowing the generally considered ‘frail’ voice of the women from reaching out to people by refusing them the use of mic system, obstructing the involvement of people in general with the sit-in.

The strategy, of course, failed. Despite not having any mic system and not even having a shed on their heads, they have continued to resist for more than a month. Despite several attempts to dislodge them, they have continued to show their resistance under scorching sunlight and cold dark nights. The use of an umbrella to protect themselves from the sun was not allowed. In fact, it is not allowed even to those who visit Mumbai bagh to show solidarity. When they use an umbrella, Police takes it away.

The sit-in protestors as well as those who were visiting to show solidarity were harassed with their mobiles getting snatched away. To create fear among the protestors the police forced them to put their contact details on a register which resulted in issuing notice under section 149 to the protestors. Idea was to jeopardize the movement by dissuading them to continue their resistance. All of these obstructions and tortures strengthened the resistance by making the women more adamant to continue with the sit-in. Police and its atrocities could not weaken the movement. It was part of the daily life of the women and it remained so.

Three recent incidents manifest the intensity of the power of the Sheroes of Mumbai Bagh. They not only are taking their own independent decisions but are also showing their capability to withstand the external pressure.

First, on February 1, the local youth who had motivated the women of Mumbai bagh for sit-in advised them to call off the protest. They even deleted the WhatsApp group created to generate support for the women of Mumbai bagh. News of this call-off was widely spread. The women not only resisted but continued with the sit-in despite the withdrawal of the physical and virtual support of the local youth.

Second, just after 4 days, a group of politicians attempted to intervene to call off the movement on, February 5th, after meeting the Home Minister of Maharashtra, they issued a press release declaring the ‘call off’ of the sit-in. They tried to persuade the women to leave the street. The power of women’s conviction withstood the pressure and they continued with the movement. They reiterated that the movement will go on until CAA and NPR are rolled back. These are the same women who were claimed not to have the capacity to make their own decisions. Today they not only are sitting out on their own will but also have shown the test of will by resisting even the local youth, the powerful Police and the ‘mighty’ Politicians. The movement has made the women of Mumbai Bagh more powerful and autonomous in taking the daily life decisions for the protest. These decisions range from inviting the speakers to scheduling appointments with the Members of Legislative Assembly. Women of Mumbai Bagh have started consultations with the MLAs on their own without any male member of the community in their delegation, to negotiate to pass of the resolution against CAA and NPR in Maharashtra Legislative Assembly.

Lastly, on the afternoon of March 4, two elderly women fainted under the scorching heat. This made the women of Mumbai Bagh decide to erect tent size umbrellas but police pulled down the umbrellas. Use of personal umbrellas was anyway not allowed. This is a humanitarian gesture on the part of the Police angered the women and they retaliated by installing the canopy. When women of Mumbai bagh were putting up the canopy, the police with its physical force tried to pull it off but women of Mumbai bagh resisted and pulled it back after a lot of efforts. Next morning around 5 am Senior Inspector of Nagpada came with large force also having male constables in civil dress to force down the canopy. They manhandled the women and even kicked one woman in her stomach yet another sustained a fracture.

The incident injured many women who were hospitalised in Nair hospital. Police were certain that the physical force used against the women would demoralise them. On the contrary, the women continued with their resistance. They along with the male population from the community ‘gheored’ the Nagpada junction and police station. They demanded resignation of SI of Nagpada police station. The day-long gherao resulted in conducting an inquiry against SI which, in its, turn resulted in her transfer from the protest site. Significantly, the Police have also granted permission to the women of Mumbai Bagh to put up the canopy and to use mic system. The sheroes of Mumbai Bagh demonstrated that their will and resistance cannot be curtailed by the police atrocity, community pressure and also the denial of basic facilities.

We salute the women of Mumbai Bagh, who practised the spirit of the international women’s day. They are fighting for equality in the patriarchal world and practising women’s rights thus actualising the spirit of “I am Generation Equality: Realizing Women’s Rights”.