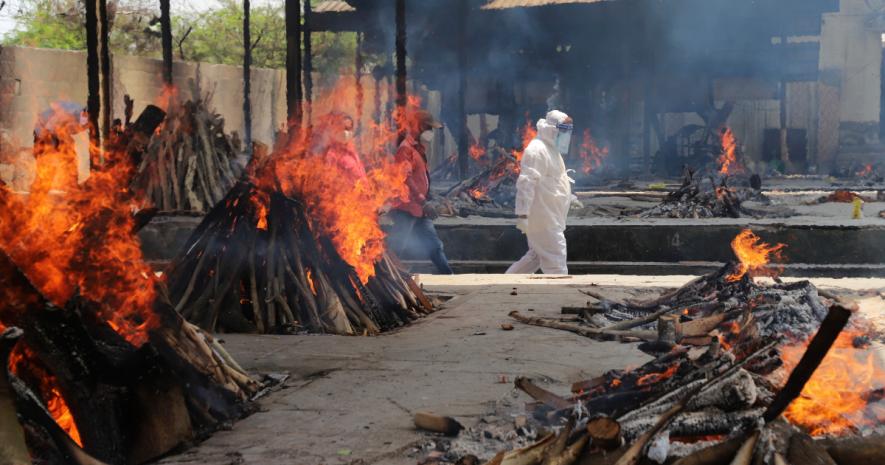 CORPES floating in the Ganges, long queues outside crematoriums, the crematoriums working overtime with several pyres burning simultaneously within an arm’s distance of each other, riverbeds strewn with numerous unmarked graves – these images from the second wave of the pandemic continue to be still haunting. Going by these images and the reality they represent, while journalists, experts, and academics are trying to arrive at realistic mortality figures, the government seems to be in denial.

However, right from the first wave of the pandemic, there have been reports alleging undercounting of deaths. Many news reports have shown that across states, the officially reported deaths do not match the actual number of deaths captured through other informal means such as counting the number of dead bodies received by crematoriums and burial grounds. Over the past year or so, scholars have attempted to measure this discrepancy by coming up with modelling-based estimates.

The estimates of under-counting vary across studies but what emerges loud and clear is that the actual number of deaths is much higher than what the State would have us believe.

One of the most common methods of capturing the discrepancy between reported and actual deaths is calculating the excess mortality. Excess mortality refers to the number of deaths from all causes during a crisis above and beyond what we would have expected to see under ‘normal’ conditions.

The Hindu published a series of reports capturing excess deaths across select states and the excess deaths overshot the officially reported deaths by a factor ranging from 1.5 times to nearly seven times. The excess deaths were calculated based on the month-wise number of deaths registered in the Civil Registration System (CRS) from January 2018 to May 2021. 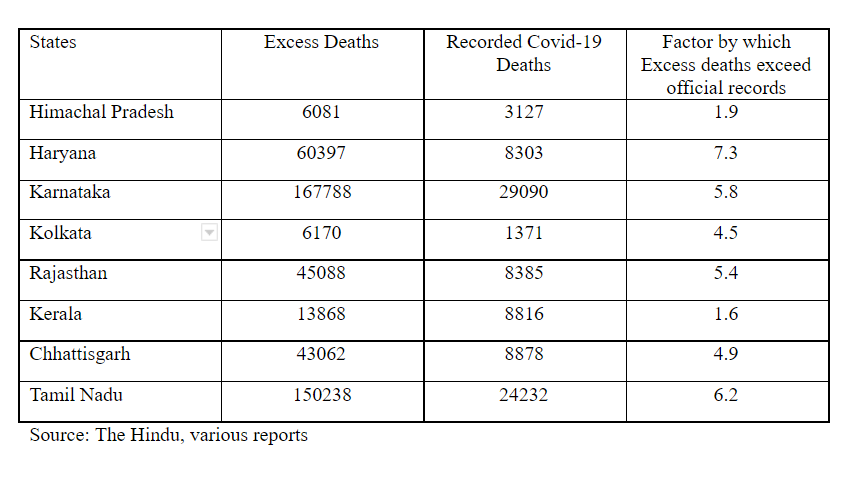 Many other journalists have also tried to capture this discrepancy. In one such report, IndiaSpend analysed CRS data for five states, Andhra Pradesh, Bihar, Kerala, Madhya Pradesh and Tamil Nadu, by comparing CRS deaths from March 2020 to May 2021 with the equivalent period in 2019. The report finds that most states, except Kerala, reported excess deaths in the range of 0.1-0.2 million deaths during the pandemic.

SOME ESTIMATES AND CENTRE’S DENIAL

Most recently, a study by Tushar Gore and Viral V Acharya used the patient flow model to understand the drivers of fatality and analysed mortality in eight districts. This study corroborated other estimates by showing that the underreporting bias for measuring COVID-19 deaths in these districts was roughly between 3-9 times. The model explained that only under certain circumstances (for example, when healthcare facilities are overwhelmed), such an undercounting is possible. Once maximum healthcare capacity is reached, there are new patients that cannot be admitted and contribute to overall deaths because of lack of care. This overflow number leads to the excessive death toll and high death undercounts.

Estimates by the CGD Study

Another significant study that has caught attention is by Anand, Sandefur and Subramanian (Centre for Global Development). This study arrives at three different estimates of the excess number of deaths using three different methods – 3.4 million, 4 million and 4.9 million. First estimate is extrapolation of state-level civil registration from seven states which suggests 3.4 million excess deaths. Second estimate applies international estimates of age-specific infection fatality rates (IFR) to Indian sero prevalence data and arrives at a higher toll of around 4 million. The third estimate is through the analysis of the Consumer Pyramid Household Survey (CPHS), a longitudinal panel of over 8,00,000 individuals across all states, which yields an estimate of 4.9 million excess deaths. 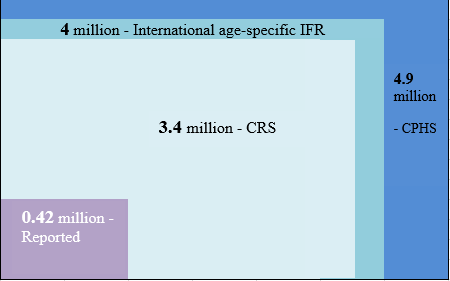 Figure 1 shows the gaps between the three estimates and officially reported deaths.

The Ministry of Health has been quick to counter these estimates and has criticised these studies. One of the criticisms says that the use of US’s and European countries’ IFRs to calculate excess deaths in India is faulty. The Ministry says that such a method dismisses the interplay between various direct and indirect factors such as race, ethnicity, genomic constitution of a population, previous exposure levels to other diseases and the associated immunity developed in that population.

However, it must be noted that the CGD study tries to correct for the differences in IFRs across countries by applying age-specific IFRs to Indian demography and sero-prevalence patterns. As the aggregate IFRs could be misleading, the study uses cross-country age-specific IFRs, the implicit assumption being that demography is the key driver of cross-country differences in aggregate IFRs.

Moreover, for a country like India, factors such as previous exposure levels to other diseases, associated immunity developed, and the state of the healthcare systems can in fact mean a higher IFR than used by the studies in question.

Estimates by the Guilmoto Study

A recent study by Christophe Guilmoto uses the age- and sex-specific COVID-19 death rates of Kerala to estimate India’s mortality at about about 2.2 million in late May 2021. Four independent population samples – deaths by age and sex in Kerala, deaths of elected representatives (MLAs), deaths of Indian Railways personnel, deaths of schoolteachers in Karnataka – are used to reconstruct the impact of mortality.

The author first applies Kerala’s age- and sex-specific COVID-19 death rates to a sample and then adjusts the intensity of mortality to fit the number of observed deaths. The adjusted mortality patterns are finally applied to India’s age and sex structure to yield national-level estimates of COVID-19 mortality. The study rests on the assumptions that the Indian Railways is the closest to Indian mortality experience because of its social and regional composition and that the MLAs and Karnataka samples are probably affected by higher mortality levels due to their specific characteristics. It emphasises that Kerala can be used as the prototype of India’s age and sex patterns of COVID-19 mortality. 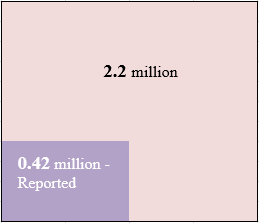 The estimates from Guilmoto’s study, which does not use excess mortality method, also help counter another assertion by the Health Ministry, namely, that attributing all excess mortality to COVID-19 is misleading.

Guilmoto notes that during the pandemic, the non-Covid mortality is most likely to decrease significantly, notably due to decreased exposure to other mortality risks because of the lockdown and safety precautions (for instance, the traffic related deaths). This will in turn lead to an underestimation of actual Covid-19 mortality. Hence, the excess mortality estimated may in fact be an underestimation and the actual Covid-19 mortality could be even higher than these estimates.

In fact, contact tracing had to be discontinued during the first wave itself. The first-hand accounts across states captured by news reports clearly show that rigorous contact tracing was nearly abandoned in many parts of India as early as July 2020. At best, only the immediate household members, that is high-risk direct contacts, were being quarantined and tested, though the guidelines say that “equal emphasis must be given for low risk contacts”. Similarly, in April 2021, the AIIMS New Delhi had revealed that the hospital was discontinuing the practice of risk assessment and contact tracing of healthcare workers exposed to COVID-19 due to insufficient resources and shortage of staff amid the pandemic.

Except for a few states or cities with reasonably good statistical sources, deaths are significantly under-registered across the country. In a paper by G.Anil Kumar, Lalit Dandona and Rakhi Dandona in the Indian Journal of Medical Research – an ICMR publication – the completeness of registration of death (CoRD) in the Indian Civil Registration System (CRS) was estimated at 77% in 2015. The CoRD varied across states with registration completeness ranging from 32% in Bihar and 44% in Uttar Pradesh to 100% in Kerala and Manipur.

Moreover, death statistics are published several years after their occurrence (no national figure is available on the number of deaths in 2019 or 2020) and with minimal information (if any) on the basic characteristics of deaths by age, sex, date, or cause (Guilmoto, 2021).

Almost all studies and reports which have tried to estimate actual deaths in India due to COVID-19 using various methods come to the same conclusion – gross under reporting of the COVID-19 deaths. The government, however, continues to be in denial. The Centre has time and again tried to rubbish the methods applied by various experts and has defended its own official reported numbers. At other times, it has tried to pass the buck to the district and state administrations by saying that India follows a bottom-up approach when it comes to reporting daily new cases and deaths and that the “Central government only compiles and publishes data sent by the state governments”.

However, the need of the hour dictates that the Centre should stop hiding behind frivolous arguments and initiate a process to count the actual number of deaths due to COVID-19. As Murad Banaji, who has been consistently following the patterns of Covid mortality, puts it: “Until the political will exists for detailed and careful surveying, there can be no confident answer to the question of how many have died of Covid-19 in India”.