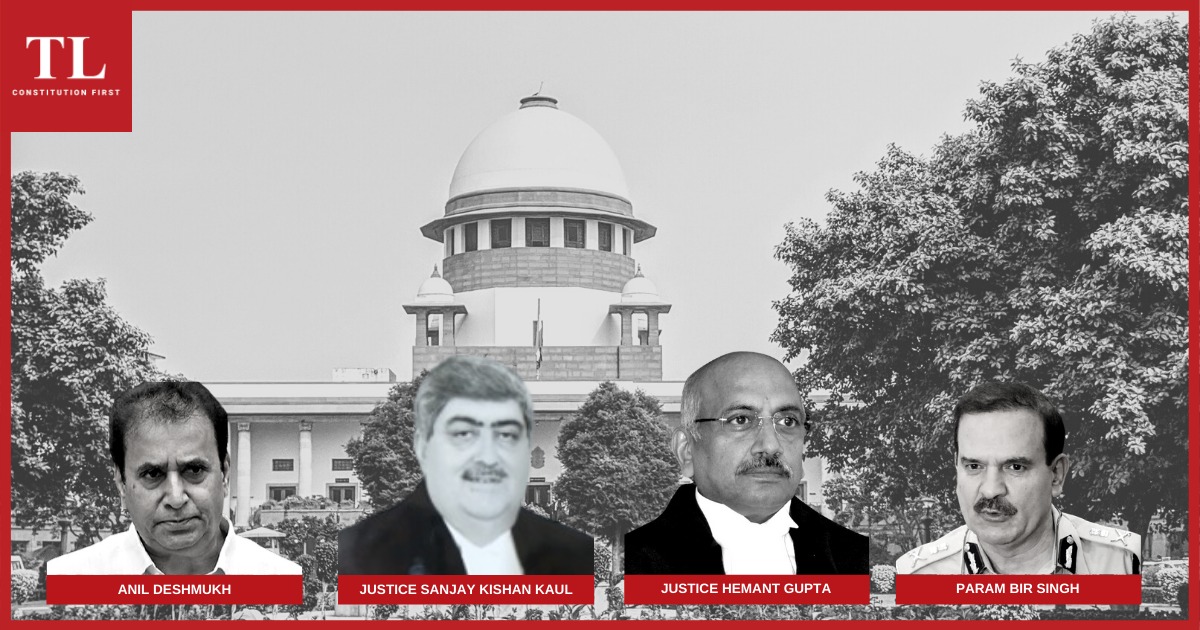 A bench of Justices Sanjay Kishan Kaul and Hemant Gupta said “the nature of allegations, the personas involved and the seriousness of the allegations do require an independent agency to enquire into the matter. It is a matter of public confidence given the factual scenario”.

It rejected the argument of the Maharashtra Government that because Anil Deshmukh had resigned after the Bombay High Court’s order, it would be a factor not to direct enquiry by an independent agency.

Referring to Deshmukh and former police commissioner Param Bir Singh, the Court said: “the two personas held post of Home Minister and Commissioner of Police for a long period and the latter would be a post of confidence of the former”.

"The nature of allegations, the personas involved&the seriousness of the allegations do require an independent agency to enquire into the matter. It is a matter of public confidence given the factual scenario", says SC while refusing to cancel CBI inquiry against #AnilDeshmukh. pic.twitter.com/rOhFgznbM3

The Court also did not accept the argument of Deshmukh that he was entitled to be heard in his individual capacity even though the State Government was represented and he was a Minister at that time.

Senior advocates Abhishek Manu Singhvi and Kapil Sibal for the Maharashtra Government and Anil Deshmukh respectively argued against the High Court’s order and sought its cancellation on the ground of procedure infirmity.

Singhvi argued that the High Court did not ask for the counter-affidavit from the state. It heard the argument on the maintainability of the petitions seeking probe against Deshmukh instead the High Court delivered a final order on merits. He added High Court’s order circumvented the procedure prescribed in Section 156 of the CrPC.

Sibal, for Deshmukh, sought to argue that High Court passed the order behind his back and that he was not heard before passing the order adversely affecting him. He submitted that investigation could not be ordered on the basis of hearsay and there was no cogent and admissible material available against him warranting CBI probe.

Sibal went on to state that the law must be uniform for everyone. It can’t be that just because the Police Commissioner has said something, his words become evidence.

However, an unimpressed Court dismissed the petition paving the CBI probe against Deshmukh.

A division bench led by Chief Justice Dipankar Datta of the Bombay High Court on April 5 directed the PE was to be completed within 15 days in accordance with the law and thereafter the CBI Director could use his discretion to decide a further course of action.

The PE would be conducted in the complaint filed by one Dr. Jayshri Patil who had lodged a complaint with the Malabar Hill Police station but they had not acted on it.

The bench added it was an unprecedented situation where the allegations were against the state’s home minister.

“The police department is under his control and direction. There can be no fair, impartial, unbiased and untainted probe, if the same were entrusted to the State Police Force. As of necessity, the probe has to be entrusted to an independent agency like the CBI”, the bench said.

It, prima facie, found the issues are such that the very faith of citizens in the functioning of the police department is at stake. If there is any amount of truth in such allegations, certainly it has a direct effect on the citizens’ confidence in the police machinery in the State. Such allegations, the Court said, cannot remain unattended and are required to be looked into in the manner known to law when, prima facie, they indicate commission of a cognizable offence.

It also took note of the press release of Deshmukh suggesting that he is not averse to facing any inquiry.

The Maharashtra Government also issued a notification on April 4 constituting a one-member high-level enquiry committee headed by a former judge of the Bombay High Court Justice KU Chandiwal, to probe the allegations made by Singh against Deshmukh.