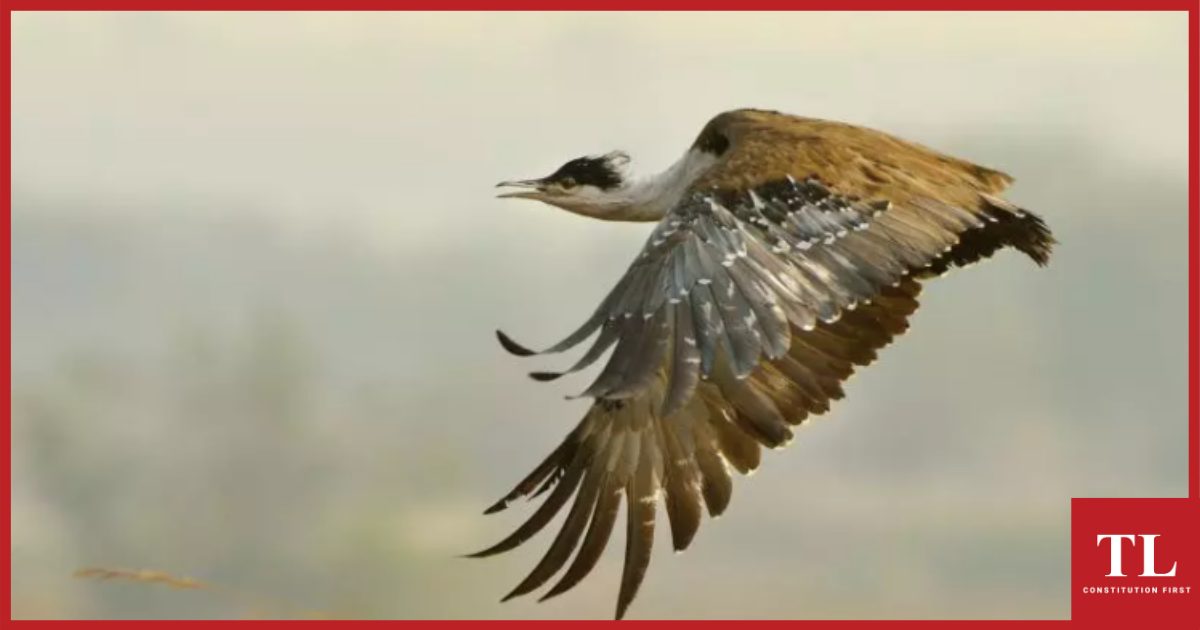 In what can be considered a landmark judgement, the Supreme Court has directed the state governments of Gujarat and Rajasthan to lay all low voltage power lines underground in the Great Indian Bustard’s (GIB) preferred and potential habitats as identified by the Wildlife Institute of India (WII) a few days earlier.

The three-judge bench of Chief Justice AS Bobde and Justices AS Bopanna and V Ramasubramanian have allotted one year’s timeline to complete the task of laying the cables underground. They also ordered that all the future power lines must go underground in the areas identified in the order. Till they are made underground, the apex court directed, that bird-diverters sholud be installed on the power lines so that the birds can see the cables from a distance and avoid colliding with them.

The plea was filed by MK Ranjitsinh, prime architect of India’s Wild Life (Protection) Act and retired IAS officer, in 2019 requesting the court to take necessary action to save the declining population of the GIB. This species has reportedly disappeared from 90% of habitat except parts of Rajasthan and Gujarat, which have to be protected. According to official estimates, there are around 150 GIBs left in the country. India has the only population of this iconic grassland species in the whole world. GIB has been categorised as “critically endangered” in the IUCN (International Union for Conservation of Nature) Red List and accorded the highest protection as Schedule 1 species under India’s Wildlife Protection Act.

GIB is one of the heaviest flying birds in the world, about a metre in height and wing span of around seven feet. The WII, through its study, stipulated that high rise transmission lines are major cause for the accidents and fatality of GIBs, which have poor frontal vision.

WII in its report “Power Line Mitigation, 2018” has stated that every year one lakh birds die due to collision with power lines. The report concluded that unless power line mortality is mitigated urgently, extinction of GIBs is certain. Surveys conducted by WII in Thar covering 80 km of power lines and repeated seven times over a year found 289 carcasses of around 30 species, including the GIBs.

Though the Union Ministry of Power admitted in their affidavit to the apex court with regard to vulnerability of GIB to powerlines, but it also contended that the underground high voltage line is not technically feasible due to several factors such as high cost and high downtime to repair any failed cable. The petitioners also referred to various instances of cables laid down underground in the country.

They referred to the invitation of public comments for laying underground cable transmission line of 220 KV  by the Government of India, Ministry of Road Transport and Highways. In another case, it is specifically contended that the 10 km long power lines were made underground by GETCO for the safety of Greater Flamingos in the Khadir Region of Kutch.

Ranjitsinh told NewsClick, “If high voltage cables can be laid underground for people and, also for thousands of flamingos in Kutch then why is it not possible for a few GIBs in their habitat areas? This undergrounding technique has been adopted in India and, is a common practice the world over.”

In addition to the death of the birds due to collision and electrocution, the conservation strategy also requires protecting the eggs of the said species in breeding centres for the purpose of hatching. In that regard, for making these centres predator proof, appropriate fencing is to be provided to the breeding grounds, the court has directed.

On the matter of finding ways to mobilise financial resources, the bench has recommended funds from electricity utility/companies having a specified net worth or turnover or net profit under the provision of Corporate Social Responsibility Act.

The court also indicated that under Compensatory Afforestation Fund Act, 2016, (CAF), substantial funds are available with the national and state authorities. The State of Rajasthan has already set up a Compensatory Afforestation Fund Management and Planning Authority (CAMPA) in 2009.  Rule 5(2)(i) of these Rules permit the use of the state fund for the wildlife conservation.

Commenting on the judgement, Ranjitsinh told NewsClick, “It is one of the best judgments which has carried out in-depth study and discussion on GIB conservation issue. We all should ensure that we do not lose a species in front of our eyes. Money should not be given precedence over saving this species from extinction. GIBs should be given protection to move freely without any disturbance from human or animals like feral dogs. Farmers who have fields in GIB habitats should not use pesticides as GIB feeds on lizards, locusts, seeds etc. The government should give incentives to farmers to opt for organic farming and run awareness programs for local people.”

Asad R. Rahmani, former director of the Bombay Natural History Society, said, “The Supreme Court has given a wonderful order but it should be implemented. It has been seen that there is no mechanism to ensure that court orders are properly implemented. That should be avoided in this case. Big fines should be imposed on companies if they don’t comply.” He also expressed worry over proposed mega solar installations in Devikot area of Jaisalmer region, which is one of the prolific GIB habitat. These high rise installations are likely to prove fatal for the birds, he added.

Meanwhile, Bellary in Karnataka was in the news lately for wrong reasons, after the state Forest Department erected tall structures like watch towers and trees in GIB habitats. The Bustards abandoned Bellary, their second breeding region after Rajasthan in the country upon these disturbances.

Samad Kottur, conservationist and a member of the Supreme Court appointed advisory committee on GIB conservation who filed a plea on this matter in Karnataka High court, said, “Supreme Court’s recent judgment will have a favourable impact on the pending matter before Karnataka High Court on the issue of the state Forest Department installing tall structures in GIB habitats.”

(The writer is an independent journalist.)