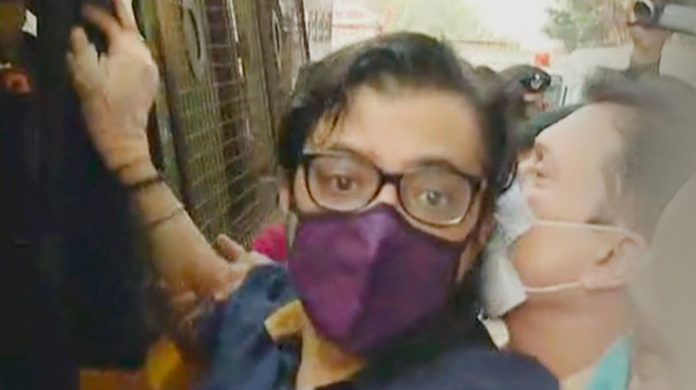 The Supreme Court Wednesday directed the release of Arnab Goswami and the other two co-accused on bail in the abetment-of-suicide case.

A bench of Justices DY Chandrachud and Indira Benerjee said the Bombay High Court erred in not granting bail to the accused persons. It added it would give detailed reasons later.

The bench also directed the accused persons to execute a personal bond in the amount of Rs 50,000 before the Jail Superintendent. Goswami and other two accused were asked to cooperate in the investigation and not make any attempt to interfere with the ongoing investigation or with the witnesses.

SC says Bombay High Court was in error in rejecting the
interim bail to #ArnabGoswami and other co-accused. Orders their release on interim bail subject to each of them executing a personal bond in the amount of Rs 50,000 to be executed before the Jail Superintendent. pic.twitter.com/dbwp3m7UB6

During the hearing, which lasted for five hours, the bench questioned the need for Republic TV’s Editor-in-Chief Arnab Goswami’s custodial interrogation.

“You may not like his ideology. Left to myself, I will not watch his channel. But a citizen is sent to jail. We must send a message to High Courts to exercise their jurisdiction to uphold personal liberty”, said Justice Chandrachud.

Justice Chandrachud went on to add “If we don’t interfere in this case today, we will walk on a path of destruction. If left to me, I won’t watch the channel and you may differ in ideology, but constitutional courts will have to protect such freedoms…”

Senior Advocate Harish Salve, for Goswami, argued malice on the part of the Maharashtra Government in prosecuting his client. He pointed out that an “A Summary” report putting a closure to the abetment-of-suicide case was filed last year.

Salve sought to argue that the ingredients of the offence of abetment of suicide were not made out.

Senior Advocate Amit Desai, for the Maharashtra Police, informed the Court that Goswami had filed a bail application before the Magistrate and then had withdrawn the same, choosing a forum that suited him. Desai added that the High Court was conscious of the fact that the plea for regular bail had been filed before the Sessions Court. In fact, Desai, submitted the High Court had directed the Session Court to decide the bail plea within four days.

“Sessions Court is hearing the matter. Why would the High Court change the hierarchy of the system for a gentleman accused under Section 306?”, Desai argued.

Senior Advocate Kapil Sibal, for the State of Maharashtra, requested the Court to not set a “dangerous precedent” by granting bail on a reading of the FIR, when the matter was before the High Court.

Sibal requested the Court to wait for the day after tomorrow and not lay down this precedent as the Sessions Court was scheduled to hear the bail application.

“We know what is going on in your mind (judges) but we know when extraordinary orders are passed in extraordinary cases then it has repercussions”, Sibal submitted.

The Bombay High Court on November 9, refused to release Editor-in-Chief of Republic TV Arnab Goswami on interim bail in an abetment-of-suicide case registered against him in May 2018.

A division bench of Justices S S Shinde and M S Karnik said no case was made out for it to exercise its inherent power. The bench though granted liberty to Goswami to approach the Sessions Court with a bail application. The bail application, if filed, would be decided within 4 days, the bench added.

Meanwhile, Goswami had filed a bail application in the Alibagh Sessions Court.

Goswami who was arrested last week and sent to judicial custody for 14 days, is accused of abetting the suicide of interior designer Anvay Naik and his mother Kumud Naik in May 2018. According to police officials, the duo died by suicide over the alleged non-payment of dues by Goswami’s television channel.

In April 2019, the Raigad police closed the case by filing a summary report which said that they did not find evidence against the accused named in the suicide note, including Goswami. However, in May this year, Anvay Naik’s daughter approached Maharashtra Home Minister Anil Deshmukh seeking a reopening of the case. Deshmukh had tweeted in May that he had ordered the CID to re-investigate the case.