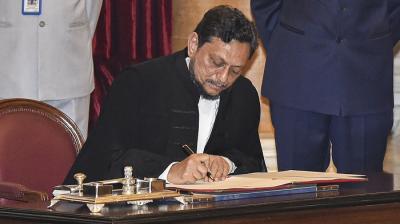 THE Chief Justice of India Monday said that comments he made during a hearing of a rape case last week were misreported to imply disrespect for women. The Supreme Court, he said, had always accorded the “highest respect to womanhood”, NDTV reported.

“We did not ask him (rape accused) to marry. We asked ‘are you going to marry?’ We did not say ‘marry’,” Chief Justice Bobde said today.

Last week, a bench led by CJI SA Bobde reportedly asked an accused, who was seeking protection from arrest, whether he would marry the survivor who had accused him of repeatedly raping her when she was a minor.

The remarks drew flak from women’s rights groups. Several women’s rights activists, eminent citizens, intellectuals, writers and artists wrote to Chief Justice Bobde demanding an apology and a retraction of his remarks. Over 5,000 people signed a petition demanding that he quit.

The remarks were made when the bench was hearing a petition by a 23-year-old government employee, Mohit Shubhash Chavan, who works as a technician in the Maharashtra State Electric Production Company Ltd. Chavan has been accused of raping a minor cousin in 2014-15 when he was allegedly 17-18 years old, and the survivor was studying in the 9th standard. The accused, who is facing charges under the Protection of Children from Sexual Offences (POCSO) had in his appeal said that according to the state’s regulations, he would be suspended from his job if he was detained for over 48 hours.

Though the court dismissed Chavan’s petition, it granted him interim protection from arrest for four weeks, during which time he would be free to seek regular bail from a sessions court.