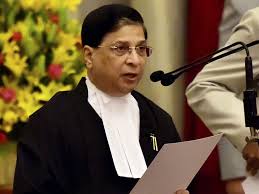 CJI had sent a letter to the President’s Secretariat seeking removal proceedings against Justice Narayan Shukla, indicted in the MCI case

In a move that’s likely to add fuel to the fire of judicial controversies, it has been confirmed that the Chief Justice of India, Dipak Mishra has indeed written to the President’s Secretariat to initiate removal proceedings against the Allahabad High Court judge Justice Narayan Shukla.  The President’s Secretariat has confirmed that it received a letter dated February 2, 2018 from the CJI Dipak Mishra’s office, seeking removal proceedings against Justice Shukla, who has reportedly been indicted in connection with the Medical Council of India (MCI) bribery case.

Recently, the organisation Campaign for Judicial Accountability and Reforms (CJAR), in its complaint to the senior most judges – under the in-house procedure of the Supreme Court before the five senior-most judges – inter-alia alleged that none other than the Chief Justice of India, Dipak Mishra himself had refused to give a sanction to the Central Bureau of Investigation (CBI) to lodge an FIR against Justice Shukla. As per the SC verdict in V. Ramaswamy case, a sitting HC judge cannot have an FIR registered against him without the permission of the CJI. In reply to the information thereby sought under the Right to Information Act of 2005, the President Secretariat vide its letter dated March 5, 2018, has informed that letter from the Chief Justice of India is “under consideration”. The reply, however, is silent on other questions that were included in the RTI application.

It must be mentioned here that the CJI can, in terms of clause 7(ii) of the in-house Supreme Court resolution of 1997, advise the concerned Chief Justice of the High Court not to allocate any judicial work to the judge against whom in-house inquiry panel has found substance disclosing misconduct on the part of the judge and to intimate the President of India and the Prime Minister that this has been done because allegations against the judge had been found by the Committee to be so serious as to warrant the initiation of proceedings for removal and the copy of the report of the Committee may also be enclosed. It may be noted that this procedure itself is controversial for it is neither traceable under the Constitution, nor in any statute.

As per the Constitution, judges of the High Courts and Supreme Court can only be removed by an order from the President of India. The order can be issued following an address to Parliament which is supported by a special majority of each House – a majority of the total membership of that House and a majority of not less than two-thirds of the members of that House present during voting.