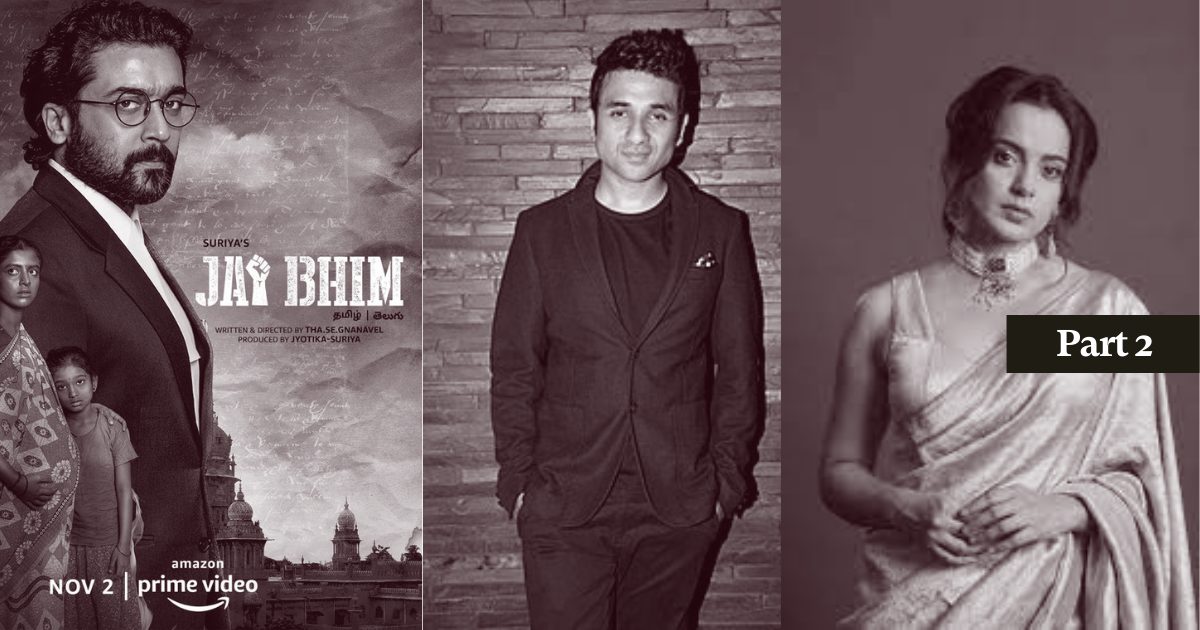 Right to offend and hurt: What we can learn from Vir Das, Kangana Ranaut and the film ‘Jai Bhim’ | Part I

The last few days have seen a spate of complaints being filed, both before the police and judicial magistrates, against allegedly objectionable statements made by comedian Vir Das and actress Kangana Ranaut, and the depiction of a character in the Tamil film ‘Jai Bhim’. But what is objectionable is not a criminal offence in the absence of criminal intent, write VINEET BHALLA and SHREYAM SHARMA.

OVER the past 10 days, there have been a slew of complaints filed, both at police stations and before magistrates, against three entities from the entertainment industry for their speech, in both professional and personal capacities. The common thread running through these disparate complaints is that all of them allege that the speech in question was offensive in some way.
Does merely saying something offensive amount to a criminal offense? What is the degree of offensiveness that one has to breach in order to enter the territory of criminality?
Here, we will first go through each of these complaints, and then try analysing whether their allegations are true, and specific criminal offences indeed committed by the impugned acts of expression.

About ten days back, comedian Vir Das put out a six-minute clip of a monologue from his performance earlier this month in Washington, D.C., U.S. on his YouTube channel titled ‘Vir Das | I COME FROM TWO INDIAS’. The video quickly went viral, and generated polarized public discourse for its unflinching examination of the duality of the good and the ugly that makes up our nation. It references controversial and unpleasant contemporary subjects such as sexual assault of women, the killing of farmer protestors at Lakhimpur Kheri earlier this month, the opacity surrounding the PM CARES Fund, rising intolerance, and so on.
Das expressly professes, at the end of the monologue, his love for India, and frames the monologue as a celebration of India’s uniqueness. Yet, immediately afterwards, at least four police complaints were filed against him in India.
Also read: Two Indias: Behind the rising intolerance in the civil society
One of the complaints, filed in Delhi by a local Bharatiya Janata Party leader, alleges that the “indecent comments” made by Das on an international platform lower the prestige and respectability of India and its women, and “seem to be part of an organized conspiracy”. It requests the police to inquire into the sponsoring of the event that Das was speaking at, as well as move against Das as per relevant provisions of the Indian Penal Code (IPC) for “hurting the sentiments of India” and “aggravating the respect of women”.
Another complaint, filed with the Mumbai police by an advocate, is made on the grounds of “defaming India in the USA”. It alleges that Das’ statement is “given only to create an atmosphere of fear and hatred”, and could “provoke violence and might impose a threat to the law and order situation”.
Yet another complaint filed with the Mumbai police accuses Das of “defaming and spoiling the image of our country”. Alarmingly, it suggests that “[h] e should be hanged till death and no one should have the courage to do this against our country. Being a citizen of my country it’s my moral duty to file the case against him.” [sic]
None of the complaints have been acted upon by the police as of now, and no first information report (FIR) under any provisions of the IPC has been filed against him as of now.

Bollywood actress Kangana Ranaut has faced ire due to two separate comments she has recently made.
First, during an interview as part of a televised event by a private news channel on November 10, she made the following infamous remarks regarding India’s independence from colonial rule in 1947: “What we got in 1947 was not independence, it was alms/charity. We got freedom only in 2014.”
Following this, on November 23, the Karnataka Pradesh Youth Congress Committee lodged a police complaint against Ranaut in Bangalore for her “unsavoury remarks against freedom fighters.” It demanded that she be tried under the IPC and the Unlawful Activities (Prevention) Act, 1967 (UAPA) for her statement.

Since both Das’s and Ranaut’s comments neither incited any actual violence, nor can be construed, by any stretch of imagination, to have attempted to incite any violence, any accusation of sedition against either would not hold water.

On November 24, a Nationalist Congress Party leader filed a complaint against her before a magisterial court in Mumbai, seeking to prosecute her for sedition, intentional insult, breach of peace, insulting the national flag and the Constitution of India. As per the complainant, her statement is offensive, degrading to freedom fighters, hurt the feelings of ordinary citizens, and attacked the Constitution of India.
Also read: Right to dissent without violence and hate speech part of freedom
Earlier on November 21, in a post on her Instagram account, Ranaut wrote the following:
“Khalistani terrorists may be arm twisting the government today.. but let’s not forget one woman.. the only woman prime minister ne inn ko apni jooti ke niche crush kiya tha.. no matter how much suffering she caused to this nation.. she crushed them like mosquitoes at the cost of her own life.. leking desh ke tukde nahi hone diye.. even after decades of her death.. aaj bhi uske naam se kampte hai.. inko vaisa hi guru chahiye…”
Following this, on November 23, an FIR was registered against her in Mumbai by gurudwara committee members from Mumbai and Delhi under Section 295A of the IPC, which deals with ‘deliberate and malicious acts, intended to outrage religious feelings of any class by insulting its religion or religious beliefs’.

On November 22, the Tamil Nadu state President of the Vanniyar
Sangam, a civil society organization that seeks to advance the interests of the “Vanniyakulsa Kshatriya communities”, filed a complaint for defamation at a Magisterial court in Chidambaram, Tamil Nadu against the producers and director of the Tamil film ‘Jai  Bhim’, alongside the over-the-top streaming service that released the film on its platform.

The immediate and most obvious point to make, when examining the potential illegality of these impugned expressions, is that while Article 19(1)(a) of the Indian Constitution grants citizens the fundamental right to freedom of speech and expression, this right is not boundless, and is subject to certain restrictions enumerated in Article 19(2).

The complaint alleges that by purportedly depicting a villainous character in the film, which is based on real life events, from the Vaniyar community, even though the real person who inspired the character was not from the same community, the film damaged the reputation of the entire Vaniyar community and insinuated that members of the community oppressed the underprivileged, as allegedly shown in the film.
The complaint calls for the accused parties to be booked under Sections
153 (Wantonly giving provocation, with intent to cause riot), 153A(1) (Promoting enmity between different groups on ground of religion, race, place of birth, residence, language, etc., and doing acts prejudicial to maintenance of harmony), 499 (Defamation), 500 (Punishment for defamation), 503 (Criminal intimidation), 504 (Intentional insult with intent to provoke breach of the peace) and 505 (Statements conducing to public mischief) of the IPC.

Does the law support these allegations?

The immediate and most obvious point to make, when examining the potential illegality of these impugned expressions, is that while Article 19(1)(a) of the Indian Constitution grants citizens the fundamental right to freedom of speech and expression, this right is not boundless, and is subject to certain restrictions enumerated in Article 19(2). These restrictions consist of the grounds of sovereignty and integrity of India, the security of the State, friendly relations with foreign States, public order, decency or morality or in relation to contempt of court, defamation and incitement to an offence.
These restrictions are made operational through various legislation, including several provisions of the IPC, some of which have been invoked in the complaints referred to above.

The offence of sedition, provided for in Section 124A of the IPC, has been invoked in a complaint against Ranaut, as well as heavily indicated in the complaints against Das.
As per a bare reading of the language of the provision, the following constitute the essential ingredients of the offence:

The second and third explanations to the provision make it clear that criticism of government measures, and administrative and other actions of the government, if done without exciting or attempting to excite hatred, contempt or disaffection towards the government, is not sedition.
Also read: Decoding the history of Sedition law in India
In its landmark judgment in the case of Kedar Nath Singh vs. State of Bihar (1962), the Supreme Court defined the boundaries within which this offence operates.
Kedar Nath Singh had been convicted for sedition and inciting public mischief because of a speech in which he criticized the government and advocated for the Forward Communist Party. He challenged the constitutionality of the sedition provision. While upholding its constitutionality, the apex court ruled that comments, however strongly worded, expressing disapprobation of the government, without exciting such feelings which generate the inclination to cause public disorder by acts of violence, would not be penalized here. It also clarified that the phrase “government established by law” under the section must be distinguished from criticism of a specific party or persons.
Hence, in the absence of incitement of violence, the offence of sedition cannot be made out.
Since both Das’s and Ranaut’s comments neither incited any actual violence, nor can be construed, by any stretch of imagination, to have attempted to incite any violence, any accusation of sedition against either would not hold water.

Tomorrow: Right to Offend and Hurt | Part II: Distinguishing between Objectionability and Illegality

(Vineet Bhalla is a Delhi-based lawyer, and Assistant Editor at The Leaflet. Shreyam Sharma is a second year B.A., LL.B. (Hons.) student at the NALSAR University, Hyderabad. The views expressed are personal.)