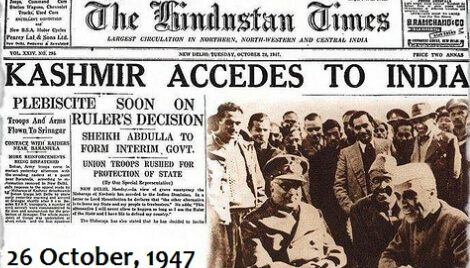 Revisiting the Special Status: The Constitutionality of Article 35A

The Permanence of the Special Autonomy

On 15th August, 1947, when India and Pakistan had become Independent States, the Kingdom of Jammu and Kashmir (J&K) had not ceded to either of the dominions, instead the Maharaja of J&K proposed a ‘Standstill Agreement’ with both countries. When Mohammed Ali Jinnah in 1946 had requested the Muslims of J&K to unite to become a part of Pakistan and appealed on communal lines, the Muslim masses rejected this argument and shouted ‘Go back Jinnah’ as recorded in Justice Anand’s seminal work ‘The Constitution of Jammu and Kashmir’ published in 1994. Pakistan entered into a Standstill Agreement with J&K, whereas India did not. Instead the Indian Government wanted to hold further negotiations. Hari Singh, the Maharaja of J&K signed the Instrument of Accession on 26thOctober, 1947 whereby J&K agreed to accede to the Union of India, after it negotiated its accession to India.

The first Indo-Pak war over the accession of J&K had led to the delay of the integration of the State to the Union. Since the drafting of the Constitution of India was taking place during the tussle over Kashmir, it was felt that a transitional provision had to be included in the Constitution regarding the relationship between India and the State. This was to be an interim arrangement till the Constituent Assembly of Jammu and Kashmir had been elected to determine the status of the relationship with India[1]. This took shape in the form of Article 370 which bestowed a ‘special status’ to Jammu and Kashmir. The special status regarding J&K arose out of the peculiar manner in which the State acceded to India and not due to the demographic component of its people, as often misrepresented by various sections. Sheikh Abdullah, the unmatched leader of the Kashmiri masses also sought a special status in light of these circumstances. Jawaharlal Nehru and Sardar Patel had various rounds of meetings on the matter of on this matter in 1949. In Nehru’s letter to Sheikh Abdullah on 18th May, 1949, he stated that Sardar Patel and he had agreed that except for the subjects conceded to the Union in the Instrument of Accession, it was for the State Constituent Assembly to determine the status of the other subjects.[2] In 1950, the Constitution of India came into effect and in it, Article 370 was the guiding light for the relationship with Jammu & Kashmir.

In 1951, the Constituent Assembly of Jammu and Kashmir was constituted based on an election which was swept by Sheikh Abdullah’s National Conference. In 1952, Nehru and Sheikh Abdullah entered into the Delhi Agreement whereby it was agreed that Jammu and Kashmir would have full power to exercise over the subjects other than those acceded under the Instrument of Accession. On 6thFebruary, 1954, the Constituent Assembly of Jammu and Kashmir ratified the accession to India and reiterated its special relationship with the Union of India.

Article 35A of the Constitution of India

Article 35A of the Constitution of India enables the State of Jammu and Kashmir to make a distinction between permanent and non-permanent residents in relation to acquisition of immovable property, settlement in the state, employment etc. The historical background to the need to make a distinction between permanent residents and non-permanent residents can be traced back to the agitation by Kashmiri Pandits who opposed the hiring of Punjabis in the state administration, which eventually led to a 1927 law promulgated by Maharaja Hari Singh, which sought to provide certain privileges to permanent residents especially in the purchase of land.[4] Due to the special circumstances surrounding the accession to India and due to the guarantee of a special status, the representatives of Jammu and Kashmir felt that law regarding permanent residents needed to continue in order to preserve their special rights visa vis the rest of the Union of India.

Article 35A was a product of the Delhi Agreement of 1952 between Prime Minister Nehru and Sheikh Abdullah, it enables the Legislature of the J&K to define ‘permanent residents’ and to provide them special privileges, and protects such laws from being held as void on the ground of it being inconsistent or for restricting or abridges any rights conferred on the other citizens of India by any provision of Part III of the Constitution.

While discussing the various contours of the Delhi Agreement in the Lok Sabha, Prime Minister Nehru stated:

“The question of citizenship arose obviously. Full citizenship applies there. But our friends from Kashmir were very apprehensive about one or two matters. For a long time, past, in the Maharaja’s time, there had been laws there preventing any outsider, that is, any person from outside Kashmir, from acquiring or holding land in Kashmir. If I mention it, in the old days the Maharaja was very much afraid of a large number of Englishmen coming and settling down there, because the climate is delectable, and acquiring property. So, although most of their rights were taken away from the Maharaja under the British rule, the Maharaja stuck to this that nobody from outside should acquire land there. And that continues. So, the present Government of Kashmir is very anxious to preserve that right because they are afraid, and I think rightly afraid, that Kashmir would be overrun by people whose sole qualification might be the possession of too much money and nothing else, who might buy up, and get the delectable places. Now they want to vary the old Maharaja’s laws to liberalise it, but nevertheless to have checks on the acquisition of lands by persons from outside. However, we agree that this should be cleared up. The old state’s subjects definition gave certain privileges regarding this acquisition of land, the services, and other minor things, I think, State scholarships and the rest.

So, we agreed and noted this down: ‘The State legislature shall have power to define and regulate the rights and privileges of the permanent residents of the State, more especially in regard to the acquisition of immovable property, appointments to services and like matters. Till then the existing State law should apply.’[5]

The text of Article 35A reads as follows:

“Saving of laws with respect to permanent residents and their rights. — Notwithstanding anything contained in this Constitution, no existing law in force in the State of Jammu and Kashmir, and no law hereafter enacted by the Legislature of the State.

(a) defining the classes of persons who are, or shall be, permanent residents of the State of Jammu and Kashmir; or

(i) employment under the State Government;

(ii) acquisition of immovable property in the State;

(iii) settlement in the State; or

(iv) right to scholarships and such other forms of aid as the State Government may provide,

shall be void on the ground that it is inconsistent with or takes away or abridges any rights conferred on the other citizens of India by any provision of this part.”

The Constitutional Bench of the Supreme Court rejected the contention of the petitioner by reasoning that since the object of Article 370 is to provide a special status to the State of Jammu and Kashmir, the powers of the President under the relevant Article should be interpreted in the “widest possible amplitude.” The Court therefore dismissed the petition and held that “We are therefore of opinion that in the context of the Constitution we must give the widest effect to the meaning of the word “modification” used in Art. 370(1) and in that sense, it includes an amendment. There is no reason to limit the word “modifications” as used in Art. 370(1) only to such modifications as do not make any “radical transformation”. Similarly, in SBI v Santosh Gupta[7] the Supreme Court reiterated that “the word “modification” must be given the widest meaning and would include all amendments which either limit or restrict or extend or enlarge the provisions of the Constitution of India.” While one may argue that the power to amend under Article 370(1)(d) includes the power to insert a provision in the Constitution, this is a matter of contention which needs to be settled by the Constitutional bench of the Supreme Court of India.

Supreme Court advocate Charu Wali Khanna, has filed a petition before the Supreme Court claiming that Article 35A is in violation of her fundamental rights under Article 14 as it provides protection to laws based on gender discrimination. Article 35A enables the State Legislature of J&K to determine the definition and privileges of ‘permanent residents.’ Article 6 of the Constitution of J&K states that a ‘permanent resident’ is a citizen of India who is a “State Subject of Class I or of Class II” or someone who has lawfully acquired immovable property and has ordinarily been a resident of the State for ten years prior to May 14, 1954. The definition of ‘State Subject of Class I or Class II’ under Article 6 is the same as the meaning provided in State Notification No. 1-L/84 dated the twentieth April, 1927, read with State Notification No. 13/L dated the twenty- seventh June, 1932, as per Article 6(3).

The controversial point of contention is Note III of the Notification dated the 20th April 1927 No. 1-L/8.4, which states:

Nevertheless, a married woman who enjoys permanent residence, if she leaves the State to permanently reside in another State, will lose the rights of a permanent resident, even though the Note does not provide for a similar deprivation in case of a man. The High Court in Susheela Sawhney[9] did refer to this aspect by stating “So far as an unmarried woman is concerned, she is as free as a male. She can leave the state in the same manner as a male can do. But the question arises, would she suffer from disqualification continued in Note III if she leaves the state for permanent residence outside the state. A male does not so lose.” It may be argued that such a discriminatory application of the law based on gender is in violation of the fundamental right to equality as enshrined under Article 14 and Article 15 of the Constitution of India.

“Section 10 of the State Constitution lays down that permanent resident have all the rights guaranteed to them under the constitution of India, and if there is some discrimination inter-se between the citizens of India who are permanent residents of the state, then in the event of a case being made out for discrimination, that provision can be struck down as violative of

By seeking the complete abrogation of Article 35A without making such a distinction, can have a disastrous effect on the already strained relationship between the State of J&K and the Central Government, and must be avoided in order to maintain the special status bestowed on the State through Article 370 due to the peculiar circumstances in which the State acceded to India. The Supreme Court should strive to maintain a balance between the special status as Constitutionally guaranteed to the people of J&K and at the same time uphold the fundamental rights of the people.

*Arvind Kurian Abraham, a lawyer based in New Delhi and the former Director of the Constitutional Law Society of NUJS, Kolkata.