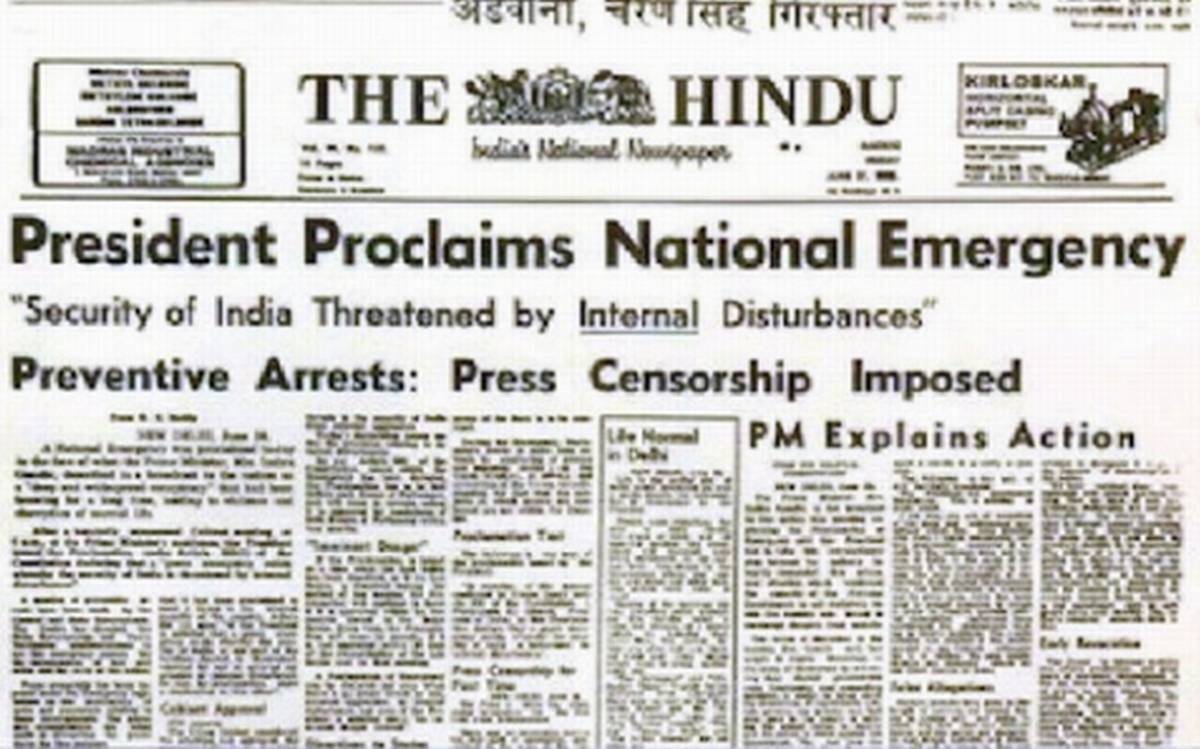 Revisiting the Emergency: A Primer

Our Special Issue on Emergency marking the 45th anniversary of its declaration will be incomplete without knowing the history of the time. The author here provides a factual background to help us understand the historical developments behind the declaration of Emergency and the ensuing attack on democratic dissent by a dictatorial state.

25th June, 1975. The date remains etched in the pages of India’s political history. It was the day when the infamous National Emergency was declared in India under the leadership of Mrs Indira Gandhi. Once President Fakruddin Ahmed officially proclaimed the emergency, the Indian democracy dived into an unprecedented era of state brutality and unaccountability. The following 21 month long period is remembered for its shameful witch hunt of the leaders of the opposition. Every form of dissent, including media and popular culture, against the ruling Indian National Congress Party was censured and heavily punished. The period witnessed a surge of violence, facilitated by the State against minorities and press.

The oppression was further sponsored by undemocratic laws that overlooked due process and basic legal jurisprudence. Legislations, such as the Maintenance of Internal Security Act (MISA), were used as an instrument by the State to pick up several young and innocent people, detain them. MISA was amended through an ordinance to allow the detention without any trial of any person who may pose a political threat through dissent.  Inhuman stories of fear and torture continue to haunt our memories even today.

Gandhi’s disqualification and sparking of the fire

Emergency in India occurred 28 years after the country liberated itself of colonial domination and adopted democracy as its political structure and philosophy. This period, in most ways was a moment of reflection and shaping of the democratic system that we had sought out to achieve.

“On 12th June, the Allahabad High Court held Indira Gandhi guilty of electoral malpractice and disqualified her from holding an elected office for six years. And that became the trigger point of the proclamation of Emergency in India.”

Indira Gandhi, for Indian National Congress had won the 1971 Lok Sabha elections with a sweeping majority from Rae Bareilly against Raj Narain. However, this victory was challenged before the Allahabad High Court by Raj Narain, alleging that Mrs Gandhi violated the code of conduct during elections and used unscrupulous ways, such as bribery, to gain this unfair advantage in the elections. Raj Narain had particularly alleged that Mrs Gandhi had misused her access to the State machinery in order to win the elections.

On 12th June, the Allahabad High Court held Indira Gandhi guilty of electoral malpractice and disqualified her from holding an elected office for six years. And that became the trigger point of the proclamation of Emergency in India. Leaders of the opposition and people of India, in general, continued to hold protests against the growing fascism of Mrs Gandhi, after the High Court judgement.

“This refusal of the Supreme Court to grant an unqualified stay on the High Court Order offended Mrs Gandhi the most.”

On 24th June, the Supreme Court of India granted a conditional stay on Allahabad High Court’s judgement. The condition was that Mrs Gandhi could remain Prime Minister for that period until her appeal was pending before the Supreme Court. Justice Iyer, in his judgement said “The judicial approach is to stay away from political thickets and new problems with institutionalised blinkers on, so long as the court methodology remains the same. Arguments about political sentiment, political propriety and moral compulsion though relevant at other levels, fall beyond the conventional judicial orbit and the courts have to discriminately shift them while deciding. on the grant of stay pending an appeal. If national crises and democratic considerations, and not mere balance of convenience and interests of justice, were to be major inputs in the Judges exercise of discretion systematic changes and shifts in judicial attitude may perhaps be needed. But sitting in time-honoured forensic surroundings the Supreme Court is constrained to judge the issues before it by canons sanctified by the usage of this Court.”

Technically, Justice V Krishna Iyer rescued Mrs Gandhi as the Supreme Court allowed her to continue in her role as the Prime Minister. The Court allowed her to participate in proceedings of the House as Prime Minister. However, she was forbidden from voting as a Member of the Parliament. This refusal of the Supreme Court to grant an unqualified stay on the High Court Order offended Mrs Gandhi the most. Hence, even though the order was favorable to her, she did not appreciate it one bit. Within two days of the order, President Fakhruddin Ali Ahmed proclaimed the emergency, citing internal disturbances. What followed were non stop arrests of all major opposition leaders and state outrage against a free press. Journalists were censored and the electricity supply to important newspaper offices were interrupted. The Times of India, in protest, published an obituary of the Indian Democracy, the Indian Express published a blank editorial column as a symbol of their voice against censorship of opinion columns. Several organizations including the RSS and Jamaat-i-Islami were banned while Mrs Gandhi also proposed her 20 point program for socio-economic reform in the country.

“Over 1,00,000 people including journalists, activists, academics and politicians were arrested under the MISA during the emergency”

Sanjay Gandhi had his own five point program and his forced sterilization initiative. Popular leaders like Stalin, LK Advani, Atal Bihari Vajpayee and Arun Jaitley were arrested. Others including George Fernandes went underground to sustain the resistance while Subramaniam Swamy escaped to the in disguise. Music by Kishore Kumar was banned in the All India Radio and films of Dev Anand were unofficially boycotted by the State and its broadcasting channels.

“The majority verdict of the Supreme Court viewed MISA to be constitutionally valid and held that during emergency Habeas Corpus writs could not be moved in any High Court or the Supreme Court, challenging an illegal detention.” Over 1,00,000 people including journalists, activists, academics and politicians were arrested under the MISA during the emergency. The ADM Jabalpur v Shivkant Shukla case was filed under this context. The issue was the constitutional validity of such arbitrary detentions. The majority verdict of the Supreme Court viewed MISA to be constitutionally valid and held that during emergency Habeas Corpus writs could not be moved in any High Court or the Supreme Court, challenging illegal detention. This was one of the darkest hours of the Indian judiciary. However, the reasonable dissent of Justice HR Khanna viewed that even during an Emergency, the right to life and personal liberty under Article 21 of the Constitution of India of all citizens cannot be taken away.

Revocation of Emergency: Is it the End?

In January 1977, Indira Gandhi, Indira Gandhi called for fresh elections in March and released all political prisoners. The emergency ended officially on 23 March, 1977. The Indian National Congress lost the elections and the opposition Janata Alliance came in power through their campaign to save democracy over fascism.

“As we celebrate yet another year since the moment in history that defined our political grammar of democracy, it is important to remember the values of dissent, discussion, and critique of each and everything that constitutes our politics, economy, and society.”

45 years hence, the period of emergency is still the core of most political debates in India. It was our defining moment for the preservation of constitutional values and civil liberties. Indian journalists, activists and scholars put up their stoic and fearless struggle against the rotten air of oppression. As we celebrate yet another year since the moment in history that defined our political grammar of democracy, it is important to remember the values of dissent, discussion, and critique of each and everything that constitutes our politics, economy, and society. And that is the legacy of the Indian democracy in its quest to overcome every social and political unfreedom.