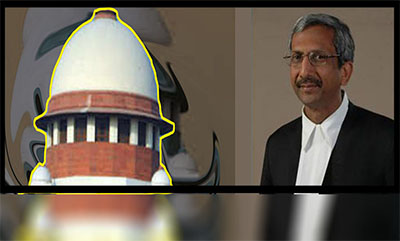 Justice A K Goel who retired from the Supreme Court today has been appointed as Chairperson National Green Tribunal (NGT).

Breaking: Justice A K Goel who retired from the Supreme Court today has been appointed as Chairperson National Green Tribunal (NGT) pic.twitter.com/ie8mshcAgq

Supreme Court Justice Adarsh Kumar Goel, whose tenure, that was marked by pronouncements both widely lauded and panned, ended with his retirement today, has been appointed as the chairperson of National Green Tribunal (NGT) on the same day, July 6, 2018. While there have been debates on whether or not there should be a cooling off period for retired justices of the Supreme Court and High Courts before they accept political/government appointments to head tribunals and other important policy-making/quasi-jurisprudential forums, Justice Goel’s prompt appointment as NGT Chairperson has indeed raised eyebrows.

It must be noted that post-retirement appointments and accepting such positions have come under heavy criticism from even former justices and Chief Justices of the Supreme Court. Former CJI Lodha as well as retired SC justice Chelameswar have declared that they would not accept government positions any time soon out of ethical compulsions, so as to keep their judicial record free of even an appearance of executive interference.

In addition, Justice Goel’s retirement comes at a time when one of his most recent judgments (along with Justice UU Lalit) diluting the Atrocities Act has been sought for review by the Government of India, but his retirement will be leaving the crucial review petition in a limbo.

Justice Goel served four years as a Supreme Court justice, and was elevated to the apex court in July 2014. Justice Goel has been instrumental in writing verdicts that were widely debated and always noticed. Whether it was the order favouring video recording of court proceedings or the recent one allowing entry of people belonging to all religions and faiths into shrines sacred to Hindus, or the one diluting the provisions of the SC/ST Act and that of Section 498A — Justice Goel has had a tenure full of verdicts that have resulted in discursive arguments.

Read: As Justice AK Goel retires from Supreme Court today, we look back at his tenure