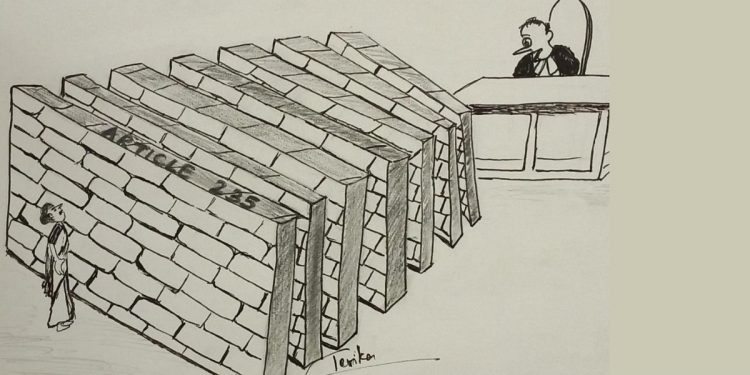 Reimagining a justice and legal system which actively eliminates hierarchies

As the counsel for the petitioner in Ms. X vs. Registrar General, High Court of Madhya Pradesh & Anr. – which resulted in the reinstatement of the former Additional District Judge who resigned, following her transfer and allegation of sexual harassment against a sitting Judge – INDIRA JAISING reflects on her experience of arguing this case, and the power dynamics which characterises the gender imbalance in the profession.

ONE of the many things that really hurt when I was arguing the case of Ms. X versus Registrar General, High Court of Madhya Pradesh and Another (Writ Petition (Civil) No. 1137 Of 2018) was the hierarchical relationship between what is referred to as “the subordinate judiciary” and the High Court. Quite unfortunately, the words “subordinate courts” appears in Article 235 of the Constitution, which gives control over district courts and courts subordinate thereto, including the posting and promotion of, and the grant of leave to, persons belonging to the judicial service of a state, and holding any post inferior to the post of the district judge to the High Court of that particular state. What exactly does this mean? We must read this along with Article 311 of the Constitution, which declares that no government employee, either of an all-India service or a state government, shall be dismissed or removed by an authority subordinate to the one that appointed them. Article 311 gives complete protection to serving judges of district courts and “subordinate courts” in their capacity as public servants.

How does one harmonize Articles 235 and 311 on the one hand and the demands of a republican democracy on the other? Does this not bring in the need for a whole new democratic culture in the relationship between the different levels of the judiciary? This question is particularly poignant when it comes to women judges. Sexual harassment is a fact of life within the legal system. Be it by judges serving or retired, it is a fact of life for women – be they interns, practicing lawyers or judges. What then does one make of this power of supervision by male High Court judges of district and subordinate judges? They virtually exercise the power of life and death over them by “spoiling their Annual Confidential Reports”, favouring or disfavouring them, or treating them as commodities. I have personally handled the cases of no less than three women judges who have taken male judges to court for sexual harassment at the workplace. However, they were all unsuccessful attempts. The first success has come with Ms. X vs. Registrar General, High Court of Madhya Pradesh & Anr.

Why does hierarchy hurt so much?

While I do not dispute the absolute necessity of hierarchy for judicial decision-making, no such hierarchy on the administrative side must exist. There has been much talk about the Indianization of the Indian judiciary. What exactly does that mean? To me, it means democratization, equality, and fraternity in the Indian legal system. During the course of the arguments in the case, the learned Solicitor General of India, who was appearing for the High Court of Madhya Pradesh, stated that speaking for himself, he prefers reliance on Indian jurisprudence and not on English common law. He also said that there were enough precedents in India for us to follow and that we may not look across the pond for answers. My response was that while this may be a demonstration of welcome nationalism on his part, we cannot forget the fact that common law has been considered as part of the law in force in India and has at the very least persuasive value for our judges. Internationalism, representative democracy, and republicanism are what we seek. In exercise of powers under Article 235, why have we not seen a more representative judiciary or legal profession, for that matter?

Sexual harassment is a fact of life within the legal system. Be it by judges serving or retired, it is a fact of life for women – be they interns, practicing lawyers or judges. What then does one make of this power of supervision by male High Court judges of district and subordinate judges?

Only 70 of 659 judges in the high courts and the Supreme Court were women, as of October 1, 2021. Justices B.R. Gavai and C.T. Ravikumar are currently the only scheduled caste [SC] judges at the Supreme Court, with three more SC judges having served in the past. In the 71 years since it was founded, the Supreme Court has only had one judge from the scheduled tribes. There have been no appointments of LGBTQ+ persons in the higher judiciary so far that we know of (although Saurabh Kirpal, an openly gay lawyer, has been recommended for elevation as a Judge in the Delhi High Court by the Supreme Court collegium). When it comes to the lower judiciary, only 30% of the judges are women. According to data from 2018, the representation of other backward classes [OBCs] in the subordinate judiciary of 11 states adds up to just 12 per cent, considerably lower than the estimates of the community’s share in India’s population. Dalits comprised less than 14 per cent of judges in the subordinate judiciary, including district courts, and tribals, about 12 per cent. The Indian judiciary is far from being truly representative.

Coming back to the question of hierarchy, why does it hurt so much? Because we women have been victims of a hierarchical, patriarchal, and exclusionary culture. A stage has come in India where not just women but all citizens have become victims of this hierarchical, authoritarian culture, regardless of gender. All it takes to be victimized is resistance to all forms of oppression.

Is the judiciary ready for the next leap, that is, putting its own house in order?

Never again should a woman judge have reason to complain of sexual harassment by another judge. This does require a true reimagining of justice and legal systems which go beyond gender justice and actively eliminate hierarchies wherever they are found.

We women have been victims of a hierarchical, patriarchal, and exclusionary culture. A stage has come in India where not just women but all citizens have become victims of this hierarchical, authoritarian culture, regardless of gender. All it takes to be victimized is resistance of all forms of oppression.

Some of our distinguished judges, namely Justice S. Ravindra Bhat and Justice Dr. S. Muralidhar, for example, have said that they do not wish to be addressed as “My Lord” or “Your Lordship”, but this is not the mainstream opinion. Language often betrays our unconscious patterns of behavior. It took Justices L. Nageswara Rao and B. R. Gavai to remind the judiciary in this case that it is the “State” within the meaning of Article 12 of the Constitution of India, and to destroy impunity for its own administrative actions. It is this impunity that, wherever found, in all institutions of power, needs to be got rid of to imagine a new justice system. As the judges have aptly reproduced the words of English historian Thomas Fuller, which had been quoted by the British judge Lord Denning, “Be ye never so high, the law is above you”.

(Indira Jaising is a human rights activist and senior advocate at the Supreme Court of India. She is also a co-founder of The Leaflet. The views expressed are personal.)