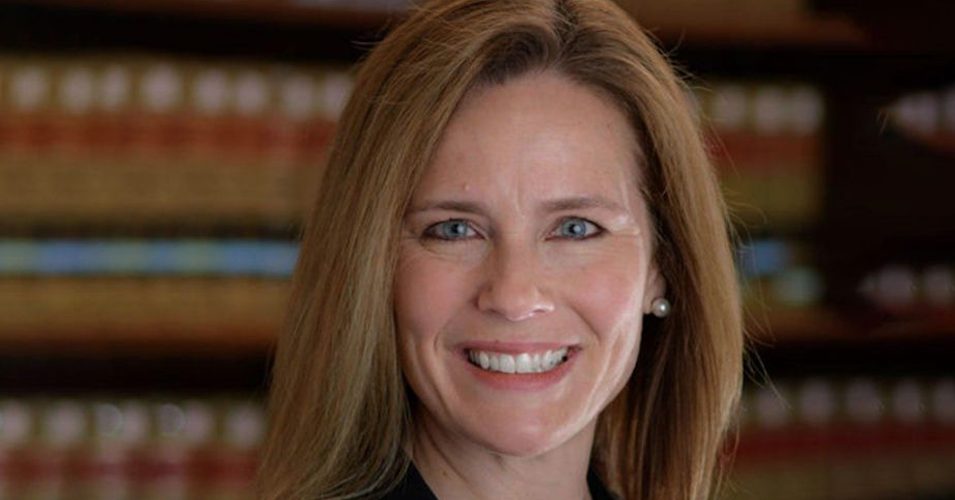 ‘Recognize What Is at Stake,’ Progressives Warn Amid Reports Trump Will Tap Amy Coney Barrett as Ginsburg’s Successor

The demise of Ruth Bader Ginsburg has set the buzz running on the next Supreme Court nominee. The matter takes a significant turn in what is a hotly contested Presidential election year. The election itself is framed as the battle of the ages between Conservatives and Liberals, or Republican and Democrats. In this backdrop, Donald Trump has announced the name of Amy Coney Barrett as the next Supreme Court nominee who, if appointed, will serve for a period of over 40 years.

She is currently serving as circuit judge on the U.S. Court of Appeals for the Seventh Circuit, also as a Trump nominee. She has joined dissenting factions asking for full court appellate hearings of decisions blocking laws by abortion opponents. She has also argued, in another dissent, for allowing felons to hold a gun. She was part of the three judge panel that made it easier for accused of sexual assaults on campus to challenge their University’s proceedings. She also dissented on the judgment that put on hold Trump’s immigration policy.

Barrett, 48, currently sits on the Illinois-based 7th U.S. Circuit Court of Appeals. If confirmed by the Senate, she will replace Ginsburg, who served for 27 years as one of the high court’s most liberal justices before succumbing to cancer last Friday at age 87.

Senate Majority Leader Mitch McConnell (R-Ky.) has said that the Senate would move to confirm Trump’s nominee, quite possibly before Election Day. This has drawn howls of “hypocrisy” from Democrats, who have noted that Republicans blocked former President Barack Obama’s nomination of moderate appellate judge Merrick Garland in 2016 under the pretense that it was improper to confirm a new justice during an election year.

“Barrett is a threat to our healthcare, reproductive freedom, to immigrant rights, equality, and the well-being of American democracy writ large,” Archila said in a statement.

Progressive groups expressed alarm at the apparent selection of Barrett to serve on a Supreme Court that has shifted dramatically to the right during the tenure of Trump, who if successful will have appointed fully one-third of its members.

Women’s and reproductive rights advocates are particularly alarmed by the prospect of Barrett on the high court. Critics point to her rulings, including a 2019 decision that made it easier for students accused of sexual assault to challenge universities’ handling of their cases, and especially her opposition to abortion, as causes for concern.

“Let’s be 100% clear about what is happening here. Impeached and failed president Donald Trump and Senate Republicans are trying to ram Amy Coney Barrett through an unprecedented and illegitimate process, so that Republicans can pack the Supreme Court as election year insurance against a potential loss, and cement policies that will strip away rights and freedoms for women,” said Shaunna Thomas, executive director of the women’s advocacy group UltraViolet, in a statement on Friday.

“The court that Donald Trump and Mitch McConnell are constructing, if they steal this seat, could take away healthcare from 20 million Americans, overturn Roe v. Wade, decimate what is left of the Voting Rights Act, put the rights of transgender women and the broader LGBTQIA+ community at risk, and reverse decades of progress on civil rights,” Thomas added.

Critics point to her rulings, including a 2019 decision that made it easier for students accused of sexual assault to challenge universities’ handling of their cases, and especially her opposition to abortion, as causes for concern.

“Barrett is a threat to our healthcare, reproductive freedom, to immigrant rights, equality, and the well-being of American democracy writ large,” Archila said in a statement. “She stands in direct opposition to women’s right to choose, to the fundamental rights of LGBTQI+ people, and to the Affordable Care Act—which has resulted in healthcare access for more than 20 million people.”

“For years, Barrett has been a member of a faith group that teaches that husbands must be the head of a household,” Archila added, “countering decades of progress championed by feminist icons like Justice Ginsburg.”

Archila was referring to the conservative Catholic group People of Praise, which some former members have said reduces women—some of whom were called “handmaids” until 2017—to a state of subservience to men. One former member told Newsweek that women members are expected to be “absolutely obedient” to their husbands and other men in the group.

“American Muslims already know what’s at stake,” Khera said in a statement on Friday. “A Supreme Court with just one Trump justice upheld the Muslim Ban, enshrining a discriminatory policy that forced Muslims to live apart from their families and sent a message that our community is not welcome in this country.”

“One with three Trump justices is capable of excusing so much worse,” Khera added.

Rahna Epting, executive director of MoveOn Political Action, said in a statement that instead of “attempting to ram [Barrett] through a rushed and illegitimate Senate approval process,” Trump and Republicans “should be focused on stopping the spread of COVID-19 and providing tens of millions of Americans with needed financial and medical relief.”

“We are appalled at their attempt to replace Justice Ginsburg with a brazen and transparently political power-grab,” added Epting, “and we are committed to opposing it in the Senate, and to defeating them at the ballot box.”

(The author is a staff writer at Common Dreams. The article was published by Common Dreams and is shared under Creative Commons Attribution License 3.0. The original can be accessed here.)