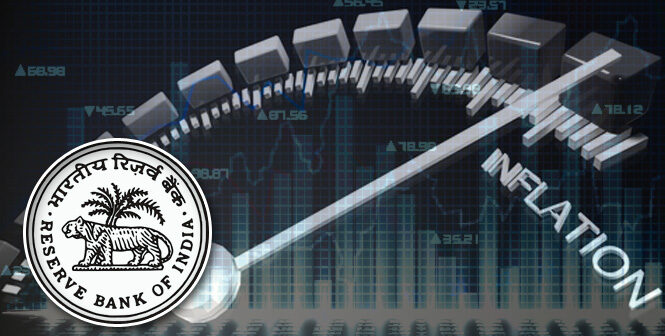 With too much money floating in market and rising food prices, the RBI needs to act swiftly and urgently to control inflation in Indian economy, writes Nantoo Banerjee

India’s massive population under the low and lower-middle income groups is increasingly under distress as the retail inflation soared to a near six-and-a-half year high in October.

The wholesale inflation rose to eight-month high. The prices of potato rose by 107.7 percent, vegetables 25.2 percent, oil fats 20.5 percent and pulses 15.9 percent. The retail market index continues to surge a double-digit growth through November — after 10.7 percent in September and 11.1 percent in October.

Food prices are hardening across the board.

Thanks to the government’s so-called large financial boosters, mostly delinked with production, productivity and consumer reach, India’s rich and well-to-do, who number at least 250 million or nearly 80 percent of the entire present US population, are fund flush and least impacted by the growing retail inflation. In fact, this category of consumers seems to be contributing more to the inflation.

But for an estimated Rs.1.5-lakh crore PM Gareeb Kalyan Anna Yojna, that distributed free ration to the poor since the beginning to the nation-wide ‘lockdown’ to fight the pandemic, the retail food prices would have soared even at higher levels. The scheme, covering some 800 million people, is scheduled to continue till the end of this month.

It is naturally feared that food prices may further move up once the free ration programme ends across the country.

But for an estimated Rs.1.5-lakh crore PM Gareeb Kalyan Anna Yojna, that distributed free ration to the poor since the beginning to the nation-wide ‘lockdown’ to fight the pandemic, the retail food prices would have soared even at higher levels.

A surging money supply with a select band of the public, followed by the successive cuts in the repo rate, at which the Reserve Bank lends to banks, is mainly responsible for the galloping inflation. The RBI seems to have failed in inflation control, one of its primary functions.

Expanding money supply is a cause of concern

The money supply has risen rapidly over the last few months.

Pouring foreign institutional funds in India’s stock market, despite its shrunken economy, have also contributed to the rising money supply. Foreign buyers ploughed a net $6 billion into shares in August when all other markets in the region, barring China, suffered net withdrawals.

Too much money is floating around in the financial system. This excess money is now chasing goods and services in the economy causing rapid inflation.

Nuno Fernandes, who helps oversee over $2 billion in emerging-market assets at New York-based GW&K Investment Management LLC, had reportedly said: “We place India at the top of the list with China for investment returns over the next 12-24 months” adding that “India equities represent one of the fastest growth areas in the world.”

The stock market boom had continued since. On November 11, S&P BSE Sensex reached a record high of 43,594. The very next week, it scaled a fresh life-high of over 44,000 points, all aided by foreign fund push.

Too much money is floating around in the financial system. This excess money is now chasing goods and services in the economy causing rapid inflation. The danger of food inflation seeping into the overall inflation in coming months is looming large. This has happened in the past.

Few will disagree that inflation is already far above RBI’s comfort zone.

This happened between 2009 and 2013. While RBI has no control over food inflation, it can control money supply that is linked with inflation. It can control the amount of money floating around in the financial system. The fear of the rising food inflation among India’s poor has come as a double whammy for them amid the pandemic.

However, the country’s farm production and prices of food items face a threat of climate change. RBI’s annual report duly noted this aspect.

Since March this year, millions of workers have lost jobs. The prolonged lockdown and its after effect led to a sudden loss of employment of daily-wagers, labourers and low-paid job holders and also many white-collar employees.

The surge in food inflation has come at a vulnerable time for millions of the country’s poor households.

With the states and the union government are gradually lifting restrictions on the public transport system, supply constraints should ease in coming months. However, the country’s farm production and prices of food items face a threat of climate change. RBI’s annual report duly noted this aspect.

“In recent years, the impact of climate change in terms of volatile rainfall intensity, increase in extreme events and the rising temperature has implications for the outlook of agriculture,” it said.

A bank rate increase by the RBI appears to be overdue.

Consumer markets watchers say that the rise in prices of food items and essential goods may continue through next few months due to extended monsoons and prolonged rains in western parts of the country damaging ready crops and leading to supply crunch. High prices of normally cheap staple food and daily household-use items such as potatoes, tomatoes, onions and eggs are making the country’s poor nervous as income levels continue to be low due to the pandemic.

Unfortunately, both the government and the RBI are almost silent on inflation control strategies.

The new farm laws amended the Essential Commodities Act, 1955, which dealt with the control of the production, supply and distribution of certain commodities. The items such as cereals, pulses, oilseeds, edible oils, onion and potatoes now stand removed from the list of essential commodities. After the Centre enacted a new set of laws freeing internal trade in farm produce, crop arrivals in regulated wholesale markets have witnessed a sharp decline.

Arrival of most crops, from oilseeds, cereals and pulses to fruits and vegetables has fallen sharply.

This is a matter of great concern.

A bank rate increase by the RBI appears to be overdue. Such a step will bring down the consumer price inflation to some extent. However, the responsibility of ensuring adequate supply of essential household consumables clearly lies with the government. (IPA)

(Nantoo Banerjee is a senior journalist. Views are personal.)