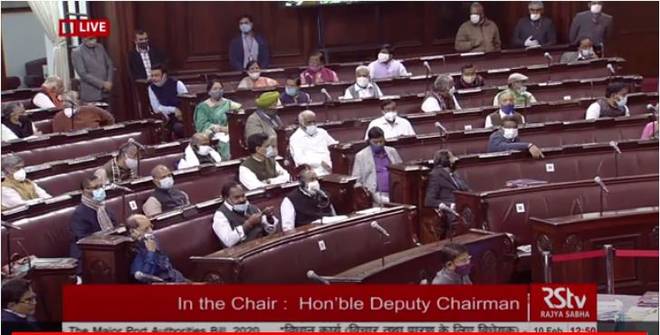 Citing existing operational restrictions and a need to remain competitive with India’s private ports, the bill suggests the formation of new boards which would see seven out of 12 of their members being private individuals, reports SIDDHARTH GANGULY.

The Major Port Authorities Bill, 2020 was passed in the Rajya Sabha today with 84 out of 128 votes. Set to replace the Major Ports Trusts Act, 1963, the Bill seeks to, “provide greater autonomy, flexibility to the major ports and to professionalise their governance.”

The new bill will replace the “Board of Trustees” which had been set up to run these major ports as per the 1963 Act with a “Board of Major Port Authority”. Besides a chairperson and deputy chairperson, the new board will consist of one member each from:

It will also include between two and four “independent members”, a nominee from the central government who is not below the rank of Director and two members who would represent the interests of employees of the port.

The board of trustees as established by the 1963 Act has been described in this bill as having, “operational restrictions due to diverse representation of trustees on the board.”

Moreover, this bill claims to make major ports more competitive against the numerous private ports that now exist in the country.

The bill lays out that this board will be responsible for making decisions regarding the usage of the port’s property and assets and will have the authority to enter into any contracts it deems necessary for functioning.

Additionally, the board will be able to create “master plans” for infrastructural development within port limits and make regulations for operations, development, and planning for the Major Port.

The penultimate provision of the Bill allows for the central government to take over the management of the Major Port Authority and to direct them in “matters of policy”.

Finally, an Adjudicatory board, consisting of a presiding officer and two other members, “as may be appointed by the central government” will be set up. This board will work to resolve disputes among major ports, Public-Private Partnership concessionaires and captive users.

There were several complaints from opposition Members of Parliament as the bill was discussed in the upper house. These included a lack of representation and protection for employees as well as a reduced stake of state governments in matters relating to these ports.

Moreover, since seven out of the 12 members of the board of Major Port Authority will be private individuals, the move was seen by the senior Congress leader Saktisinh Gohil as another step towards privatising the industry. Moreover, concern over a lack of experts in the Adjudicatory Boards was also expressed by opposition member P. Wilson from the DMK.

Union Minister of State for Ports, Shipping and Waterways Mansukh Mandaviya addressed these concerns, stressing that these are not moves towards privatisation but simply to remain competitive with private ports.

He said that Public-Private Partnerships (PPPs) were necessary for these ports to compete with their private counterparts.

Addressing concerns regarding the expertise of members of the Board of Major Port Authorities, he mentioned that experts would be brought in to the governing boards. The government is “committed to federalism” and that the increased autonomy being brought in is required for “better decision making,” he said.

(Siddharth Ganguly is a final year journalism student at the Symbiosis Institute of Media and Communication,  Pune, and is an intern at The Leaflet. )