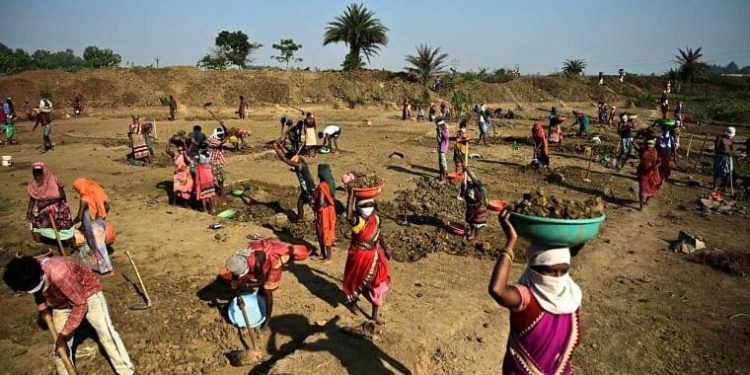 Presenting the State Budget 2022-23, the Rajasthan Government, on February 23, announced the introduction of the Indira Gandhi Urban Employment Guarantee Scheme. This scheme guarantees 100 days of employment in a year to those families residing in the urban areas who seek work.
After Himachal Pradesh, Jharkhand, Odisha, and, more recently, Tamil Nadu, Rajasthan becomes the fifth state which has implemented an urban employment scheme during the COVID-19 pandemic period. Kerala, being the pioneer, has been implementing such a scheme – the Ayyankali Urban Employment Guarantee Scheme – since 2011.
In another welcome step, the Rajasthan government has increased the number of days of employment available under the Mahatma Gandhi National Rural Employment Guarantee Act (MGNREGA) to 125 days.
The Rajasthan Budget 2022-23 has allocated Rs. 800 crore for the Indira Gandhi Urban Employment Guarantee Scheme for the next financial year. Incidentally, the Rajasthan Chief Minister Ashok Gehlot was among those who had written to the Union Minister for Urban Development Hardeep Singh Puri in 2020, asking the government to introduce a national urban jobs scheme.
Amit Basole, Faculty, Azim Premji University, the lead author of a detailed report on the job guarantee programme for urban India, says, “This is a good development. There are versions of urban employment schemes in states like Kerala, Odisha, Himachal Pradesh, Jharkhand, and recently in Tamil Nadu. Most of these budgets are around Rs 100 crore, while the Rajasthan government has announced Rs 800 crore, significantly more than other states. Moreover, it has been phrased as a guarantee which is not the case in every other state programme. It remains to be seen whether it will be a guarantee on the ground. However, it needs to be emphasised that as the hardships owing to COVID-19 pandemic continue, a national level programme is imperative.”
The COVID-19 pandemic has put additional stress on the employment situation, and we saw extreme distress in rural and urban areas. Scores of workers had to reverse migrate to the villages due to suddenly imposed lock-downs. Activists, academicians, experts have all been arguing for and advocating the introduction of an urban employment guarantee on the lines of the rural employment guarantee scheme – the MGNREGA.
This is in sharp contrast to the Centre’s Budget for 2022-23, under the BJP Government, which not only did not address the grim situation of urban unemployment but also reduced the allocation for the MGNREGA. Allocations to the MGNREGA programme were reduced from INR 98,000 crore in 2021-22 revised estimates to INR 73,000 crore in 2022-23 budget estimates – a sharp cut of 34%.

HIGH UNEMPLOYMENT RATE – BEFORE THE PANDEMIC AND SINCE

This is the situation before the pandemic hit the country. The unemployment rates were rising steadily. After 2020, the period saw a sharp rise in unemployment, especially urban unemployment.
As the quarterly PLFS reports show, 2020 was the worse for the working-class population. The country has still not recovered from the shock.

During April-June 2020, the urban unemployment rate had shot up to 21%. This resulted from periodic unplanned lock-downs imposed by the Central government, which did not foresee the livelihood catastrophe these measures might push people into.
Gradually, the rate has climbed down since then but remains higher than in the pre-pandemic period. The latest quarterly PLFS report for January-March 2021 records an unemployment rate of 9.4%.
It must be noted that these unemployment figures refer to the current weekly status giving average unemployment in a short period of 7 days during the survey period. According to the current weekly status approach, a person is considered unemployed in a week if they did not work even for 1 hour during the week but sought or was available for work at least for 1 hour during the week. This is a very narrow definition and does not capture the distress adequately.

Experts have argued that to tackle extreme poverty and distress, what is required is a guarantee of employment and schemes of direct cash transfers. The years of MGNREGA experience is encouraging. While the rural population has had some safety net, the urban migrant working population is hardly protected through any such net.
The 25th Parliamentary Standing Committee on Labour had noted in its report in August 2021 that “unlike employment generation programmes in rural areas, the plight of urban poor has not got much attention of the Government.”
“There is an imperative need for putting in place an Employment Guarantee Programme for the urban workforce in line with MGNREGA,” the report further said.
Jean Dreze, Visiting Professor, Ranchi University, who was also one of the drafting members of the MGNREGA, has proposed the Decentralised Urban Employment and Training (DUET) scheme.
The basic idea of DUET is that the government would issue ‘job stamps’ and distribute them to approved public institutions such as educational institutions, shelters, jails, museums, municipalities, and government departments. These institutions would convert each job stamp into one person-day of work within a specified period, as long as they arrange it. The government would pay the wages directly into the workers’ account on the presentation of job stamps, duly certified by the employer. This is on the lines of employment-subsidy schemes such as the “service voucher schemes” tried by several European countries.
Another study by Amit Basole and the team at Azim Premji University has underlined the need for an urban unemployment guarantee which “needs to be imagined differently (than MGNREGA) given the differences between the rural and urban labour markets.”
They propose a national level, demand-driven, public works programme targeted towards small and medium-sized towns aiming to provide a legal right to employment while improving the quality of urban infrastructure and services, restoring urban commons and ecology, skilling youth, and increasing the financial and human capacity of Urban Local Bodies.
Another set of work proposed is the one that requires a range of education and skills. These include building and maintaining roads, footpaths, and bridges; creation, rejuvenation, and monitoring urban commons like water bodies, forest land, wetlands, provisioning of care for children and the elderly; and monitoring, evaluation, and surveying of environmental quality, among others.
These steps taken by a few state governments to provide some safety net for the urban working population by guaranteeing employment are crucial. Although the budgetary allocations still fall short, they do show the intent. These also pave the way for demanding such guarantees under the law by the Parliament. Will the Central government learn from this and introduce a national employment guarantee for the urban populace and also strengthen MGNREGA?