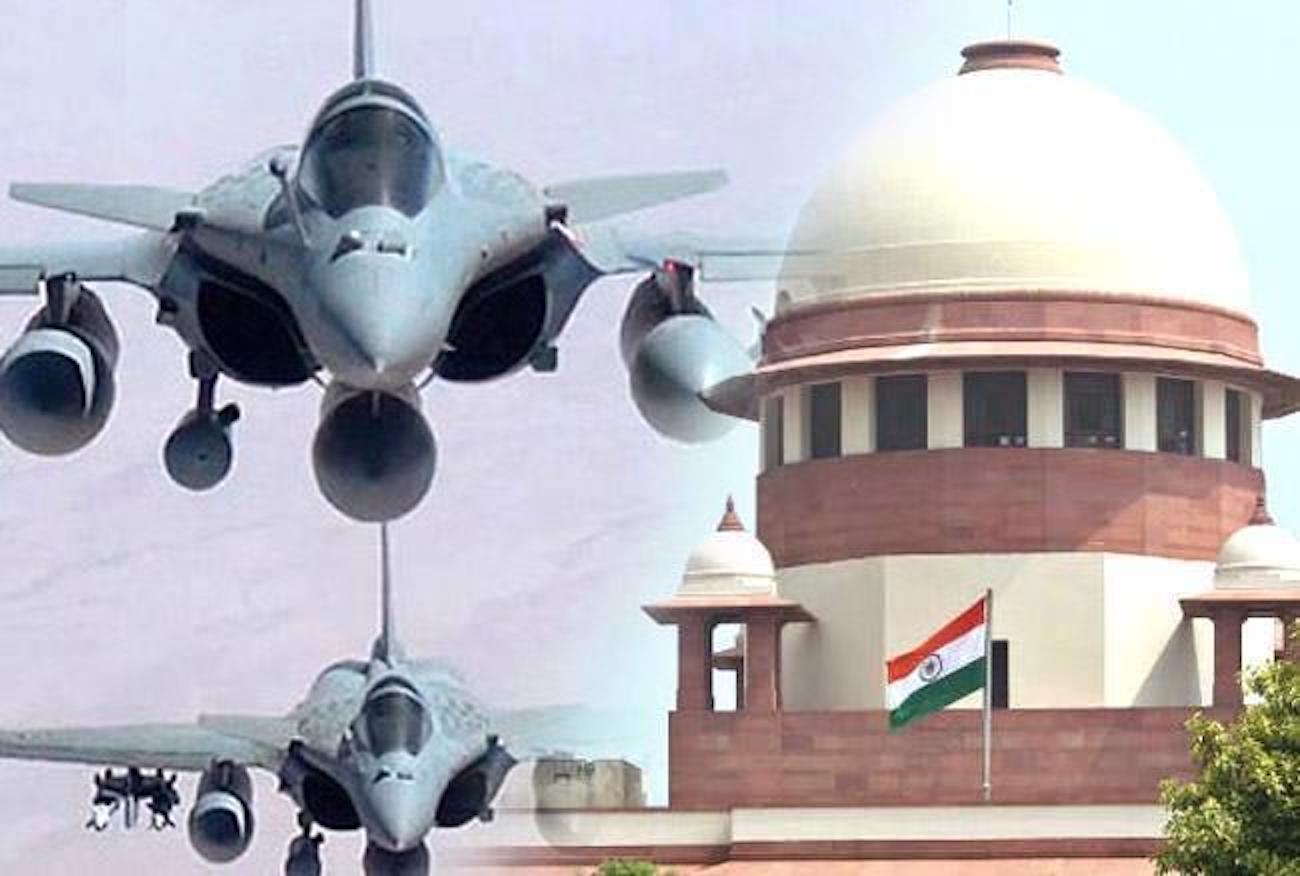 [dropcap]A[/dropcap] three-judge bench comprising Chief Justice of India  Ranjan Gogoi, Justices Sanjay Kishan Kaul and K M Joseph of the Supreme Court after hearing the matter at length for five hours has reserved the judgment on a clutch of four Public Interest Litigations filed by six persons, namely — the first two by Advocates M L Sharma and Vineet Danda, a third by AAP MLA Sanjay Singh, and the last one jointly filed by former finance minister Yashwant Sinha, former telecom minister Arun Shourie and lawyer Prashant Bhushan. These PILs, in substance, seek probe into the controversial “Rafale deal” inked between the Government of France and the Government of India for the purchase of 36 Rafale fighter jets.

Background of the Rafale Deal

In April 2015, Prime Minister Narendra Modi had announced that India would buy 36 French-manufactured Rafale fighter jets off-the-shelf from Dassault, the French aircraft builder and integrator. In 2012, the UPA government had chosen Rafale with a plan of adding 126 Rafale aircraft to Indian Air Force’s fleet — that is buying 18 off-the-shelf jets from France Dassault Aviation and the remaining 108 were to be assembled in India by Hindustan Aeronautics Limited (HAL), Bengaluru. However, Prime Minister Narendra Modi decided to junk the previous deal and instead opt for a new one, of buying 36 ready-to-fly fighter jets instead of 126, citing “critical operational necessity”.

In January 2016, India and France signed a Memorandum of Understanding for acquisition of 36 aircrafts. As per the deal, Dassault’s partners — engine-maker Safran and electronic systems-maker Thales — will share some of its technologies DRDO, HAL and some private sector companies. In September 2016, an inter-governmental agreement, popularly known as the Rafale Deal, was signed whereby India would pay ₹58,000 crore or 7.8 billion Euros.

In November 2016, the Congress accused the Government of India of causing insurmountable loss of taxpayers’ money and claimed that the UPA government had a better negotiated cost. It also claimed that the Reliance Defence Ltd had been unfairly picked to be the French defence firm’s Indian offset partner, among others.

On October 31, 2018, a three-judge bench comprising CJI Ranjan Gogoi, Justices U U Lalit and K M Joseph directed the Government to place before it in a sealed envelope the pricing details of the Rafale deal. The Attorney General KK Venugopal raised objections citing the Official Secrets Act, 1923, to which the Court asked an affidavit to be filed to this effect.

The pricing details were submitted to the Supreme Court on Monday in a sealed cover. However, it refused to share the details with the Petitioners. The Central Government also submitted a 14-page document titled Details of the Steps in the decision-making process leading to the award of 36 Rafale fighter aircraft order.

Today, when the matter was taken up for hearing, petitioner-in-person advocate M L Sharma opened the argument told the Court that the inter-governmental agreement was illegal and sought a court-monitored investigation.

Advocate M L Sharma says documents supplied by the centre show that there is a serious fraud played in this deal. He urges court to refer the matter to larger bench of five judges.

Advocate Prashant Bhushan, who also appeared in person, told the Court that the pricing was revealed in Parliament; hence, the submission of Government that it cannot be disclosed cannot be accepted. In reply, Attorney General KK Venugopal said that the price revealed in the Parliament and also as stated in the Sanjay Singh’s Petition of the aircraft as Rs 670 crores did not include that of fully loaded aircraft.

Justice K M Joseph to AG- whether RFP was required for 36 Rafale aircrafts. AG said NO since it was the inter-governmeral agreement.

Nobody included the defence minister knew about the change in deal. Offset given to Ambani. Reliance has no experience in defence manufacturing says Prashant Bhushan. Number of aircrafts reduced to 36 aircrafts? Who took this decision? And why did PM announce this decision?

Petitioner Sanjay Singh’s counsel Dheeraj Singh questioned the rationale behind the decision of the Government on reducing the initial number of obtaining 126 jets to 36 under the new deal under the Narendra Modi government.

Counsel for Sanjay Singh requests court to issue notice in the matter and time may be given to file a reply to the documents submitted by the government of India.

Attorney General KK Venugopal mentioned that the IAF has been writing to the government regarding the shortage of fighter jets.

Justice KM Joseph questioned the Additional Secretary of Defence, Apurva Chandra, on the off-set clause. Attorney General KK Venugopal told the Court that Dassault Aviation has not yet submitted details of the offset partnership.

The Court interacted with the Air Marshal and Air Vice-Marshal. CJI Gogoi asked Air Vice-Marshal J Chalapati about the latest inductions to the Indian Air Force to which he responded saying they were Sukhoi-30. They informed the Court that there were no “new generation inductions since 1985”.