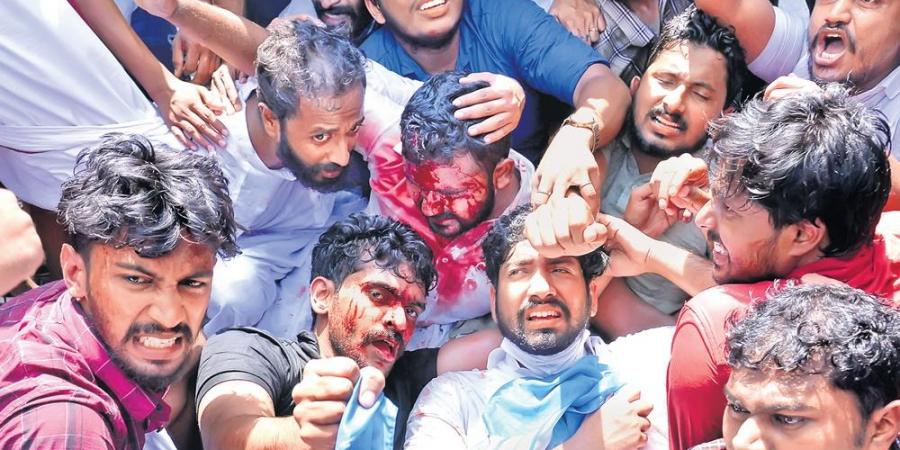 While political parties play a blame game of conspiracy theories and lack of action, students and police personnel bear the brunt as PSC protests turn bloody in Kerala reports SAIKEERTHI.

A PROTEST march led by members of the Kerala Students Union (KSU), the student wing of Congress, turned violent in the state capital on Thursday. The march was organised as a means of showing solidarity with the protesting rank holders of the Kerala Public Service Commission (PSC).

Former Kerala Chief Minister and Congress leader Oommen Chandy visited the protesting Youth Congress activists. He urged the government to respond to the demands of the protesting youth regarding the revival of expired PSC rank lists. In his speech, he also questioned why the Left Democratic Front (LDF) government had cancelled 147 rank lists rendering worthy candidates unemployed.

KSU members marched towards the secretariat gate and cleared police barricades in an attempt to breakthrough. A group of activists also made attempts to climb over the walls to enter the administrative building. Protesters were seen hurling stones, flag poles and water cans at police personnel standing guard outside the secretariat.

The police had to resort to lathi-charge and water cannons to keep the situation under control and to disperse the protesters.

Upon taking to dispersal techniques, the clashes between the police and the students turned violent. KSU workers were reportedly injured including KSU State President K M Abhijith, Vice President Sneha S Nair and its General Secretary Nabeel Kallambalam.  According to reports, around 10 KSU workers and six policemen were injured in the clashes. Authorities stated that the exact number of injured citizens was unknown.

The injured were reportedly shifted to various hospitals in the capital.

Meanwhile, Chief Minister Pinarayi Vijayan held the protesters responsible for attacking police personnel and conspired that the violence was pre-planned. He also justified the actions taken by the police and stated that they showed restraint even as they were being attacked.

He also claimed that the protests were organised to divert the attention of the people from the welfare and developmental activities taken up by the state.

The CM has been highly critical of the timing of the protests coinciding with the upcoming State Legislative Assembly Elections in May.

(Saikeerthi is a final year journalism student at the Symbiosis Institute of Media and Communication, Pune, and an intern with The Leaflet)