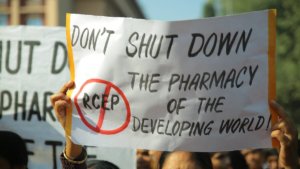 Profits over lives: Why RCEP is a bad trade deal for India.

India hosted the 19th round of the Regional Comprehensive Economic Partnership (RCEP) in Hyderabad from 17-28th July, 2017. Around 700 negotiators from 16 countries had gathered behind closed doors to negotiate this mega-regional free trade agreement (FTA). The RCEP provides a platform for further market liberalization by promoting free trade and increasing foreign investment. The Hyderabad RCEP round also saw the organizing of mass movements of peasant groups, labour unions, dalit networks, women’s groups, sexual minorities, patient groups from across the country mobilizing under the banner ‘People’s Summit against FTAs and RCEP’ with multiple events from conventions, workshops and protest marches to strongly express opposition against FTAs and the RCEP.

Why are Free Trade Agreements harmful?

Free Trade and Investment Agreements (FTAs) are binding international treaties signed between either two countries (bilateral) or several (multilateral). As the name suggests, they seek to reduce trade barriers and protections to domestic markets by opening them up to foreign goods and services through reduction of tariffs and trade quotas. They cover areas like government procurement, intellectual property and e-commerce.

While some FTAs contain Investment Chapters there are many standalone Bilateral Investment Treaties (BITs) that essentially seek to promote foreign direct investment into countries.

FTAs are premised on the claim that removal of trade barriers would result in economic growth, increase employment rates and improve standards of living, there is overwhelming evidence that these trade agreements have further impoverished the worlds’ poor while generating substantial profits for multinational companies.[1]

What are the implications of FTAs for access to medicines?

India is the pharmacy of the developing world

In the 1960s and 70s, in response to soaring medicines prices which was amongst the highest in the world, the Indian government took key legal and policy decisions to promote local production of medicines and make them affordable. Getting rid of product patents under the patent law was one such measure which allowed local generic companies to thrive, resulting in market competition that brought down medicine prices over a period. So much so, by the early to mid 2000s Indian generic companies became the main supplier of ARVs to the developing world leading to substantial cost savings.[2]

To become a WTO Member, India, in 1994, signed onto the Agreement on Trade-Related Aspects of Intellectual Property Rights (TRIPS), the domestic implementation of which meant amending our intellectual property laws to meet standards required under the TRIPS Agreement. This included granting of product patents for a period of 20 years. India, Brazil and other developing countries, however, fought hard to secure and retain public health safeguards in domestic implementation of the TRIPS Agreement, including transition periods, determining patentability criteria, allowing for pre and post grant oppositions to challenge the validity of patents and also compulsory licenses. These were reinforced by the Doha Declaration on TRIPS and public health adopted in 2001, which recognised and affirmed the right of WTO members to interpret and implement the TRIPS Agreement in a manner that supported their “right to protect public health and access to medicines for all.”[3]

India is one of the few countries where TRIPS flexibilities have been used extensively by patient groups to challenge multinational pharmaceutical companies’ monopoly of HIV, HCV and cancer drugs.

IP under FTAs- going TRIPS Plus

Since the adoption of the TRIPS Agreement, multinational pharmaceutical companies with the support of their governments have been seeking other avenues to push for stronger intellectual property protections and enforcement, beyond what the TRIPS Agreement mandates, in order to extend their patent monopolies and keep generic competition out.

FTAs are negotiated outside of the multilateral trading system established by the World Trade Organisation (WTO) which is largely seen by developed countries as an ineffective forum to advance their trade interests. The Doha Round of the WTO, otherwise known as the Doha Development Agenda, was launched in 2001 and negotiations are still ongoing without any consensus or agreement. Bilateral trade deals, on the other hand, are easier to negotiate.

Under FTAs, ‘Intellectual Property Chapters’ are where such TRIPS Plus provisions are being pushed for and developing countries are being pressured to sign onto them. If agreed to, parties to the FTA would have to amend their domestic laws to comply with its treaty obligations. Being the later treaty, if there is any inconsistency then it would override the obligations under the TRIPS Agreement.[4]

One of the primary objections by peoples’ groups to these negotiations is that they are completely non-transparent and secretive. Till date, no draft or negotiating text has been made available to the public neither is it required to be placed before Parliament for debate. Consequently, the sovereignty of the Parliament stands eroded while the country is bound by serious legal and policy implications attached to some of these provisions that hurt our developmental agenda. Non-compliance of binding treaty obligations can even attract sanctions and other such measures.

With respect access to medicines, the RCEP poses a serious threat to access to affordable generic medicines and perils India’s role as the pharmacy of the developing world. If agreed to, some of the TRIPS Plus provisions under the FTA extending patent monopolies for longer periods jeopardizing affordable access that can save lives.

Some of the current IP demands being pushed under the RCEP are:

Patent term extension– The 20 year patent term mandated under the TRIPS Agreement was negotiated taking into account the delays in the process of granting patents and in receiving marketing approvals. However, MNCs want to extend this period by another 5 years to further their monopolies by keeping generic medicines out. India is being pressed by Japan and South Korea, in particular, to agree to this demand with the backing of Australia and New Zealand. Ironically, the Australian Government in its 2013 pharmaceutical patents review has argued against patent term extension recommending the savings from it to be used towards direct subsidies for pharmaceutical research and development.[5]

Data Exclusivity (DE)– under this measure national drug regulatory authorities who generally rely on originator company’s trial data to approve subsequent applications for marketing approval would be prohibited from doing so. Even where there is no patent DE effectively allows similar market monopoly to the originator company. Under the RCEP the demand made is a DE period of 5 years. A 2007 study by Oxfam on the US-Jordan FTA revealed that DE delayed generic competition for nearly 80% of newly launched 21 medicines in Jordan between 2002-2006[6] costing an additional expenditure on medicines of between 6.3 to 22.04 million USD.

Broader and stricter IP Enforcement– RCEP contains stricter enforcement provisions with respect to patent infringement than what is mandated by the TRIPS Agreement. For example, RCEP requires judicial enforcement measures to be available for all IP- trademarks, copyright, patents, geographical indicators- whilst Articles 46, 51, 59 and 61 of the TRIPS Agreement limits stringent enforcement measures to trademark and copyright. Similarly, RCEP contains infringement provisions which if broadly interpreted can result in wrongful detention of generic medicines. Similar provisions were invoked by the EU in 2010 to repeatedly seize Indian generic medicines in transit via Europe headed to Latin American and other countries. India was forced to initiate dispute resolution procedures before the WTO but the matter was finally settled in 2011 after EU agreed to not carry out such seizures. The RCEP now seeks to replicate these border enforcement measures without even providing adequate safeguards to the alleged infringers including the right to be given notice and a hearing which are required under the TRIPS Agreement.

Investor State Dispute Settlement (ISDS)– By defining IP as investment, several FTAs including the RCEP seek to empower private investors with the right to sue government in secret arbitration tribunals, completely outside domestic court systems, for millions of dollars in damages. Companies may claim that their expectation of profits have been negatively impacted by public health or other policy measures that the governments have taken. For example, Eli Lily used the ISDS provision under the NAFTA Agreement against Canada after its domestic courts had invalidated two of Eli Lily’s patents, seeking atleast 500 million USD in damages. Their claim was ultimately rejected by the ISDS Panel with costs. However, for developing countries the legal costs of such proceedings and potential damages to be paid creates a chilling effect. For example, Gilead, who has filed for patents on Sofosbuvir, the Hepatitis C drug,threatened to sue Ukraine under the US-Ukraine BIT for 800 million USD if it did not withdraw the marketing approval given to generic Sofosbuvir, forcing Ukraine to settle the issue and withdraw the marketing approval.

First, binding legal commitments made by the Executive under FTAs must be placed before the Parliament and the text of such agreements must be made public. Second, it is important for India and other developing countries who are part of the RCEP negotiations to resist TRIPS Plus provisions which threaten access to affordable medicines for the region and compromises India’s role as the pharmacy of the developing world. Indian negotiators must promote India’s pro-public IP law, which encourages real innovation in pharmaceuticals by disallowing non-deserving patents as a model for the rest of the region to follow. Third, India must conduct an impact assessment of the effects of FTAs, Investment Agreements and ISDS on the livelihoods, health, environment and development of its population and review its existing liabilities before signing on to further FTAs.

Lorraine is a Delhi based lawyer and Senior Legal Officer with Lawyers Collective.

[3]Declaration on the TRIPS agreement and public health, adopted at the Doha WTO Ministerial, WT/MIN(01)/DEC/2, on 14 November 2001.