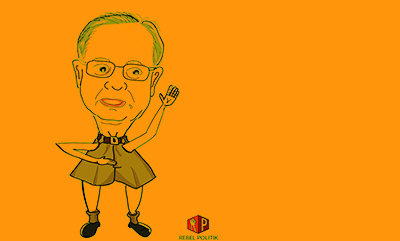 Two sides of the same coin: Pranab Mukherjee gentrifying RSS is unbecoming of a self-proclaimed ‘Nehruvian’

[dropcap]I[/dropcap] rrespective of what Pranab Mukherjee would have or has spoken at the Rashtriya Swayamsevak Sangh (RSS) function, the objective has been achieved. Hitherto, it was only the Vijay Dashami address of the RSS sarsanghchalak (supremo) that mattered. But media frenzy at the invitation and the acceptance of the invitation by Pranab’da has ensured that overwhelming publicity was achieved, even before Pranab Babu had spoken his first words from the dais.

The speech of the sarsanghchalak Mohan Bhagwat seems to have enthused the RSS rank and file. They are revelling in the new found robust “mainstream” acceptance and centre-stage that the RSS currently occupies. It is no longer a pariah. It is no longer an embarrassment to be a “khaki knicker-wallah”. They are “nation-builders” now, our moral compass, the arbiter of what or who is a “nationalist” or an “anti-national”.

The fact that RSS has managed to traverse from the lunatic fringe into the national mainstream is bad news for every thinking, progressive Indian. It is finally free from the taint imparted on it by the “anti-national Left-based Congress-sympathisisng JNU intellectuals and historians”, who have done great disservice to RSS by concealing the glorious work done by it through years from public knowledge.

No matter what positive optics the sarsanghchalak of the RSS may seek to create, it was and it continues to be antithetical to the one of the cornerstones of the modern Indian state — secularism. On this short and fundamental point alone, its rise is bad news for modern India.

Historically, the RSS has had a distinct upper-caste bias. It has always been — sometimes covertly and at times overtly — against the minorities, the scheduled castes and tribes, those belonging to economically weaker sections and other backward classes. A cabal of Maharashtrian Brahmins (Hegdewar, Golwalkar, Joshi et al) have long ruled it from their Nagpur headquarters with an iron fist of intolerance.

Of late, RSS has employed a few ideological tricks to mainstream itself and gain affections of a small but significant section of the Hindu male — especially those who are yet to come to terms with the invasion by Muhammad Ghori and Mahmud Ghazni (which by the way, happened a thousand years ago) of a clutch of Hindu kingdoms that exited in what is currently the territory of the Republic of India.

A bogus concept, if ever there was one. RSS claims of it being an organisation devoted to “cultural nationalism” is plain humbug. Truth is, they haven’t, as yet, had the guts to be openly and clearly theocratic, and say: “To hell with our Constitution and its egalitarian principles; India should officially declare itself a ‘Hindu Nation’; Hindus should be first-class citizens; all important constitutional posts would be held only by Hindus (preferably upper castes); and people of all other religions would be relegated as second-class citizens.”

While they have been dropping way too many hints to the same effect, they are yet to fully, openly, and officially endorse a Hindu State; though many, from the sarsanghchalak Mohan Bhagwat, to Union ministers like Anant Kumar Hegde, have indicated that Constitution should be tweaked to better suit a Hindu ethos and culture. A bit like Nazi Germany 2.0. More like what the Jamaat-e-Islami in Pakistan, or the ruling Shia clerics in Iran, stand for. Eerily similar to the doctrine of “Nizam-e-Mustafa” that was the war-cry for the jihadi Islamist terrorists when they drove out the Hindu Pandits from the Kashmir Valley in the late 80s and early 90s.

The fundamentalist Islamist forces — to be firmly distinguished from democratic Islamic states that hold elections, or other formations that allow co-existence of multiple faiths — are brazen and unapologetic. They believe that their version of Islam has no place for democracy or secularism. There is just no question of any other faith being placed on the same/equal footing as Islam, according to their twisted idea of faith. According to these hardened religionists, there should only be one law in the land, which is the religious law. It’s the Sharia and nothing else. Everything and everyone should be subordinate to it.

Now isn’t that music to the ears of the knicker-wallahs (notwithstanding the important sartorial modification that the RSS has undergone recently by replacing its khaki half-pants with equally grotesque brown pants)?

The RSS has historically sought to cover its theocratic agenda with the diaphanous fig leaf of “nationalism”. They are a poor comical photocopy of the Islamists. Two sides of the same coin. Unlike the radical Islamists, the RSS doesn’t yet have the guts, gumption or courage to say what the Islamists say and propagate so openly. While the RSS is still afraid to take such a stand openly — knowing fully well that large swathes of secular and inclusive Indians, steeped in Gandhian and Nehruvian worldview even if they are often not entirely aware of it, will not accept their narrow, communal agenda, which might precipitate grounds for the Sangh getting banned yet again.

Precisely why, this spin about “cultural/Hindu nationalism”. Indian nationalism isn’t handicapped to need the crutches of Hindutva or communal parochialism — peddled as “Hindu culture” — to stand on. Isn’t nationalism a self-sufficient concept in itself? Why do we need any pre-fixes? Does it make our nationalism better? More evolved? Simply put, nationalism is loving your nation. It is a positive emotion. But how can you love your nation without loving the people living inside it?

RSS nationalism is phoney, quite like the late Bal Thackeray’s who used to claim with a straight face that he is a nationalist and then promptly have his goons bash up Indians from southern states, Uttar Pradesh, Bihar, practically any Indian whose mother tongue wasn’t Marathi, but who happened to live in Bombay and Maharashtra of his time. Let’s not mistake communal or regional chauvinism for nationalism.

Love your country and its people without any bias or prejudice. Without any historical baggage or any future expectations. Without looking at their religion, caste, language, ethnicity, region or dietary, sexual, and political preferences. That’s it. That is the classic, simple, pure Nationalism 101 for you.

Hindutva isn’t the same as being Hindu: even the Supreme Court says so

I know. Regrettably, the Supreme Court erred in failing to call a spade a spade, when in 1995, the Justice JS Verma bench bought the spin given by the RSS about Hindutva being a “way of life”. Really? When right-wing fruitcakes assault people for their diversity of ideas, worldviews, food, attire, religion, language — are they expressing the Hindu “way of life”?  Do politicians allude to a way of life when they seek votes in the name of Hindutva? Isn’t this a naked appeal for vote on religious lines under the garb of a “way of life”? This is one area where our constitutional institutions have let us down. However, even the judgment did say that Hindutva is “not a religion”. Our best way forward, therefore, would be to appeal to Hindus appalled by Hindutva not to, ever, mistake the latter for the former, and to reject the Sangh’s political extremism.

Debunking the ‘Patel was anti-Nehru’ myth

One of the many hilarious examples of the RSS alt-history is this running thread: “Patel was anti-Nehru. Had Patel been independent India’s first Prime Minister, and not Nehru, India would have been a different (read ‘Great’) nation.”

RSS was established in 1925 by Keshav Baliram Hedgewar, the man Pranab Mukherjee described as a “great son of Mother India” at the Sangh function on June 7. Sardar Patel, India’s first home minister, died in 1950. For 25 years of his adult life, Patel had the option of leaving the Indian National Congress and joining RSS. He didn’t. But he surely did ban it — as India’s home minister in the aftermath Mahatma Gandhi’s assassination by Nathuram Godse on January 31, 1948. (Whether Godse was formally a part of the RSS, or the Hindu Mahasabha as on January 31, 1948 is semantics, but the fact that he was extremely sympathetic to the RSS ideology is seminal.)

So all this talk of Patel wearing khaki knickers beneath his dhoti is a viciously misleading but a highly persuasive propaganda, symptomatic of the modus operandi of fascist forces. Sure, Sardar Patel had his differences with Nehru — nothing wrong in that. But Nehru did not banish Patel to the “Margdarshak Mandal”. He remained India’s second most powerful person till his death. If Nehru had pre-deceased him, then it would have been Patel as India’s second Prime Minister. Patel was deeply committed all his life to Gandhian principles of inclusiveness, which formed the bedrock of the modern Indian nation and its Constitution.

In fact, ex arguendo, even if Patel was made India’s first Prime Minister, he would have been at the helm for barely two and half years, and Nehru would have eventually ended up as India’s PM for a decade and half. It is fashionable these days to criticise Nehru — for everything under the sun, right from Chinese incursions, to India not being a permanent member to the United Nations Security Council, to the stagnant “Hindu Growth Rate” of the economy, to Salman Khan’s interminable bachelorhood (Okay, I made the last one up, but I hope you get the drift!).

Yes, there were several bloopers Nehru committed, in thrall of his idealism, but credit to that man for India not going astray like most of the nations who, got independence in the post-Second World War era (such as Pakistan, and later, even Bangladesh for a while). Nehru nurtured our institutions, and it is on those strong foundations that the modern Indian nation stands. Those foundations are a veritable eyesore for the RSS.

That Pranab Mukherjee called Hedgewar a “great son of India” and “schooled” the RSS in Nehruvian principles, praising constitutional patriotism and what not, shows how narrow political gains overrode the former president and a lifetime Congress man’s commitment to the fundamentals of this nation. That the RSS is hell bent on destroying the very Nehru-Gandhian institutions, the secularism inherent to the constitutional patriotism that Mukherjee so waxed eloquent on, was not even hinted at by the former president. In fact, what Mukherjee’s presence did to the RSS, hitherto the far-right of the ideological spectrum, was to gentrify it into a new “centre”, not a semi-covert organisation with immense political influence but a platform for dialogue and debate, the new normal. It is this paradigm shift that the RSS would now claim has happened after one of the most powerful and significant among one-time Congress politicians graced it with his presence.

Mukherjee’s lecture — anodyne and without any specific reference to the systemic assaults on India’s foundations by the Sangh-BJP combine — would soon be forgotten, but what would go down in history as a lasting memory is the former president sharing a dais with the men who have, since the inception of their benighted organisation, carried out a shadowy war against India’s openness and constitutional principles. This would be in addition to the RSS/BJP misinformation machine working overtime to generate fake images and fake texts attributing to Mukherjee what he didn’t say, but what he very well knew would be attached to him, given RSS’ mutable relation with history, geography and political science.

RSS’s Hindutva and Jinnah’s two nation theory are two shirts cut from the same cloth and made exactly in the same manner and style, with only one crucial difference: one is coloured saffron, the other is green. Please do not be misled by its colour. Reject both. Save India from being a saffron version of a Pakistan.