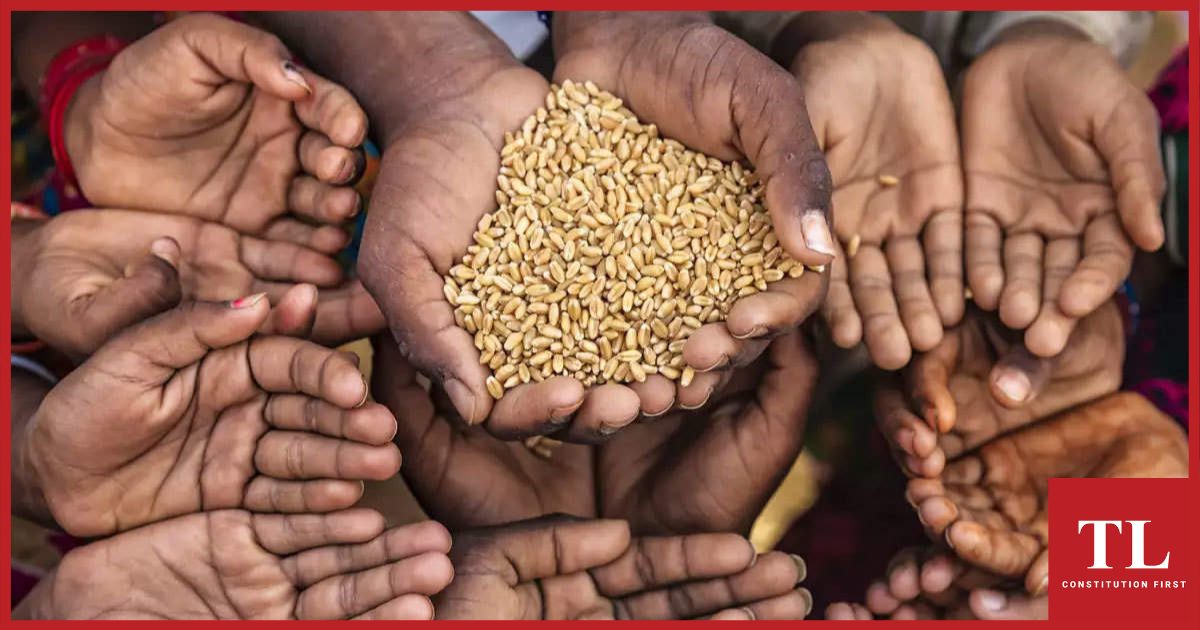 There are thousands of poor people to whom free ration isn’t reaching despite government schemes to see that this doesn’t happen. Many are registered under the National Food Security Act 2013, but are misled by fair price shopkeepers and government ration storekeepers. This has led to the benefits of government schemes not reaching disadvantaged communities, writes RAJA MUZAFFAR BHAT reports from Srinagar.

HEN free ration was being distributed in Goggee Pathri village in central Kashmir’s Budgam district on the eve of Eid recently, 80-year- old Ali Jahara, a Scheduled Tribe Gujjar, was denied free rice for his family. Jahara was told by the ration storekeeper that he was dead as per government records. Several other consumers were also denied free or subsidised rice.

This included Gulla Geege, 73, also a tribal. He was told that his name was not Aadhaar-linked and so his ration had not been released by the government. Another villager, Nazir Ahmad Wani, was told by the storekeeper that his name was not updated on the e-portal of the Food Civil Supplies and Consumer Affairs Department.

Some locals alerted one of our activists, Mushtaq Ahmad, who video-recorded the statements of around six to seven poor consumers in Goggee Pathri village. He then cross-checked their details on the online portal. Ali Jahara, who belongs to the Antodaya Ana Yojna (AAY) category, was not dead in official records as claimed by the storekeeper. He and his wife Gulzara were Aadhaar-linked as well.

Similarly, Gulla Geege and Nazir Wani were also registered as Priority Household (PHH) consumers on the e-portal. Jahara, who was waiting for free ration announced by Prime Minister Narendra Modi, was made to pay Rs 1,000 for 50 kg of rice for which he otherwise would have paid only Rs 150 as subsidised rice is sold at Rs 3 per kg to BPL, PHH and AAY consumers as per the National Food Security Act 2013 (NFSA).

This is not only in Goggee Pathri village. There are thousands of such cases where free ration isn’t reaching the poorest of the poor in the country.

There are a huge number of consumers who are registered under NFSA, but like Ali Jahara, are misled by fair price shopkeepers and government ration storekeepers, leading to the benefits of government schemes not reaching disadvantaged communities.

After the second wave of Covid-19, the Modi government on April 23, 2021, announced free rations for two months to economically weaker sections under the Pradhan Mantri Garib Kalyan Anna Yojana (PMGKAY). Under this programme, the government provides 5kg free food grains to approximately 80 crore beneficiaries for May and June. An amount of Rs 26,000 crore will be spent on the initiative.

As Covid-19 cases swelled in Delhi and life came to standstill, the Arvind Kejriwal government on May 4 decided to provide free rations to all ration cardholders in the capital for two months.

This includes non-poor consumers as well, unlike the PMGKAY where they are excluded. The Delhi government is now planning to provide free rations also to those not covered under NFSA. The apex court has also intervened in this issue.

As regards PMGKAY, the ministry of finance is the nodal ministry for this national programme. PMGKAY was initially announced for a three-month period (April, May and June 2020), covering 80 crore ration cardholders. Later, PMGKAY was extended till November 2020. On April 23, 2021, the government announced its decision to restart this free ration distribution programme.

Under this scheme, each consumer who is covered under NFSA will be provided an additional 5 kg grain (wheat or rice) free. This is in addition to the 5 kg subsidised food grains being provided through the Public Distribution System (PDS). PMGKAY-II lacks an important component, pulses (1kg per family), which was provided free last year with rice or wheat.

Meanwhile, a local court in Budgam took cognizance of this issue after Mushtaq filed a formal complaint against the storekeeper of Food Civil Supplies and Consumer Affairs (FCS & CA). The official who has been suspended by the Government was not only selling rice at exorbitant rates but he has been accused of attacking Mushtaq when the departmental inquiry team visited Goggee Pathri recently.

“ When the team came to Goggee Pathri I was also there. The Storekeeper instead of being ashamed attacked me and manhandled me. I then decided to move to the court of law as the department is not taking stringent action against these corrupt officials. For the last year, I have been fighting against this ration mafia who are selling the rice in the black market. I am happy court has taken cognizance of my complaint” said Mushtaq Ahmad while talking to The Leaflet.

Sub Judge Chadoora Tabassum Qadir directed the SHO Chadoora to take action in accordance with law and to file a compliance report by or before 9.6.2021. The court order reads:

“I have pursued the complaint as well as annexures filed by the counsel of the applicant. A perusal of the complaint reveals that the commission of cognizable offences against the accused has been made out. In view of the above said discussion and the material on record I deem it fit and appropriate to direct SHO Police Station Chadoora to take action in accordance of law and file a compliance report by before 9.06.2021”

The Department of Food & Public Distribution under the ministry of consumer affairs claims that around 75% of the rural population is covered under NFSA. In urban areas, the government claims that 50% of the population has been ensiled under this programme.

There are two categories of consumers who benefited under NFSA—AAY and PHH households. AAY families are the poorest of the poor and entitled to 35 kg of foodgrain per family per month. PHH is entitled to 5 kg per person per month. The work of identification of eligible households is to be done by states/UTs, but this is marred by favouritism.

In most states and UTs, there is a huge chunk of poor who are still not covered under NFSA. It is the responsibility of state governments and UTs, to evolve criteria for the identification of priority households and their actual identification.

Section 10 of NFSA provides that a state government or UT shall identify the households under AAY as per guidelines applicable to the said scheme and the remaining households as PHH to be covered under PDS.

In J&K, there is a third category as well called Non-Priority Households (NPHH). They were covered under the above poverty line category before the implementation of NFSA in J&K. Despite the existence of Article 370, NFSA was extended to J&K in toto with effect from April 1, 2016, when the PDP-BJP-led government headed by Mufti Mohammad Sayeed was in power. The then J&K legislature had assented to this Bill.

NFSA provides highly subsidised rations of wheat flour for Rs 2 per kg and rice for Rs 3 per kg to about 75 lakh people in J&K who have been listed as PHH. Another 45 lakh, listed as NPHH, get their rations at higher rates. This means that more than 95% of J&K’s population is covered by NFSA. But its benefits are not reaching every household in J&K. The situation is much worse in urban areas of the country.

Dipa Sinha, a Delhi-based Right to Food campaign activist, told The  Leaflet: “Most migrant labourers working in big cities are not covered under NFSA. They don’t have ration cards, and so do not benefit from the Right to Food programme. To get entitlement under PMGKAY, consumers need to have a ration card provided under NFSA, but this huge population doesn’t have it. This is a major challenge under NFSA. Now the Supreme Court has come to the rescue of migrant labourers and workers in Delhi NCR and an interim order has been issued to the government and a few states. Whether this will benefit all the migrant workers only time will tell.”

It is important to mention that beneficiaries of NFSA are based on the last Census (2011). Since then, the number of food-insecure people has increased and they remain uncovered.

Sukhbir Singh Badal, the head of the Shiromani Akali Dal (SAD), last year alleged that there was embezzlement of free rations in Punjab. He alleged favouritism in the distribution of foodgrains and pulses to Congress supporters.

In a letter to Modi, Badal requested that ration being sent under the extended PMGKAY scheme be monitored stringently through central observers to ensure that it is not pilfered and sold in the open market or distributed among Congress supporters.

Badal also alleged that the Punjab government did not distribute the central ration to migrant labourers, leading to their exodus from the state.

Dr Yasir, a social activist from Hyderabad, told The Leaflet that inferior quality rice, locally called toota chawal (broken rice), was being distributed to poor consumers under PMGKAY in the city. He also alleged that many poor families living under the poverty line in slums of the old Hyderabad and other areas were not entitled to even broken rice as they didn’t have even a white ration card meant for AAY and PHH consumers under NFSA. He said that not only were migrant workers not included under NFSA, but many local residents were deprived of subsidised and free ration.

“The inferior broken rice which is meant for poor consumers and was provided free of cost for six months during Covid-19 last year or sold at Rs 2 per kg in normal days is smuggled and sold in the black market to the restaurant owners at Rs 10-15 per kg as the said rice is used to make idlis and dosas. Even non-eligible people who managed to get ration cards under NFSA sell the broken rice to restaurant owners,” Yasir alleged.

Taking serious notice of the issue, the Supreme Court issued an interim order on May 13 where the centre and the governments of Delhi, UP and Haryana were directed to provide dry rations to migrant workers in  Delhi NCR under the Atma Nirbhar Bharat Scheme or any other scheme through the PDS prevalent in each state starting from May 2021.

Atmanirbhar Bharat Abhiyaan or Self-reliant India campaign was launched by Modi on May 12, 2020. This was a special economic and comprehensive package of Rs 20 lakh crore, which is equivalent to 10% of India’s GDP, to fight the pandemic. Delhi alone saw a huge migration of labourers last year. Activists and media had criticised the government for not being able to provide ration to the non-ration cardholders in Delhi NCR.

The Supreme Court also directed the opening of langars (community kitchens) for the stranded labourers. A bench of Justice Ashok Bhusan and Justice MR Shah observed that it was inclined to direct the starting of community kitchens and dry rations in Delhi NCR for migrant labourers so that nobody starves.

(Raja Muzaffar Bhat is a Srinagar-based activist, columnist and independent researcher. He is an Acumen India Fellow. The views expressed are personal.)