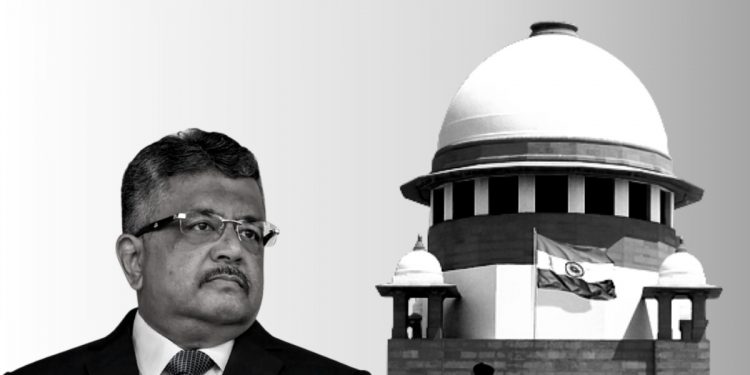 THE offence of money laundering is highly sophisticated, committed with a premeditated mind, and unlike the various offences in the Indian Penal Code [IPC], is a continuous offence, argued Solicitor General Tushar Mehta at the Supreme Court.

Mehta was making submissions before a bench comprising Justices A.M. Khanwilkar, Dinesh Maheswari and C.T. Ravikumar in response to a batch of petitions challenging the constitutional validity of various provisions of the Prevention of Money Laundering Act [PMLA].

Mehta argued that the controversy raised about the offences under PMLA being either cognizable or non-cognizable is irrelevant in view of the peculiar scheme of the PMLA. As per the Code of Criminal Procedure [CrPC], cognizable offences are those offences in which a police officer may arrest a person without a warrant. On other hand, for a non-cognizable offence, a police officer has no authority to arrest without a warrant. Mehta contended that the question of an offence being either cognizable or non-cognizable arises only for the limited purpose of power to arrest with or without a warrant. However, in the context of the PMLA, these two distinctions are of no relevance, argued Mehta, adding that Section 19 of PMLA expressly confers the power to arrest upon the officers of the Enforcement Directorate [ED], namely, the Director, the Deputy Director and the Assistant Director, without requiring them to take any warrant.

Besides, Mehta contended that the definition of ‘cognizable’ and ‘non-cognizable’ offences under CrPC applies only to a ‘police officer’, while the authorities mentioned under PMLA are not ‘police officers’. He submitted that PMLA is a complete Code to the extent it provides for the investigative process till the stage of filing of the complaint. Mehta took the bench through the scheme of the PMLA and submitted that it is a special law providing for a separate procedure. Referring to Sections 65 and 71 of the PMLA, Mehta contended that the provisions of CrPC would apply to the limited extent wherein the PMLA does not provide for a procedure. Besides, in case of any conflict, the provisions of PMLA would override the provisions and procedure of the CrPC.

Mehta produced a comparative chart in juxtaposing provisions of CrPC and PMLA to show how the various provisions of CrPC are already parts of the PMLA with a variation. For example, Section 154 of the CrPC provides for a first information report [FIR] in cognizable offences. Under PMLA, information in the form of copies of the FIR/charge sheet/Prosecution Complaint of the offence mentioned in the schedule of the PMLA are obtained from the Law Enforcement Agency under Section 54 of the PMLA.

Mehta argued that the starting point of investigation cannot be in the nature of an FIR considering the fact the procedure prescribed by PMLA provides for the complaint process. He added that under PMLA the investigative powers are not vested with the police and neither is the ED office a ‘police station’. Therefore, there is an implied exclusion of the CrPC provision.

Mehta elaborately argued how section 19 of the PMLA contains adequate safeguards against arrest in comparison to section 41A, CrPC. He claimed that under section 19 of the PMLA, the power of arrest vests with higher authorities, unlike the case in CrPC in which an officer-in-charge of the police station with the rank of a Sub-Inspector can make an arrest. Mehta told the judges that the ED Director is appointed by the Union Government on the recommendation of the Central Vigilance Commissioner under the Central Vigilance Commission Act.

Also Read: ‘The process has become a punishment unto itself under PMLA’, counsel tells Supreme Court

Mehta further added that under CrPC, mere suspicion is enough to arrest a person, whereas under PMLA, the threshold is “reason to believe” that any person has been guilty of an offence punishable under that Act. Besides, such reasons are to be recorded in writing. He added that duty is cast under PMLA to inform the arrestee of the grounds of arrest. In addition, the officers are required to send a copy of the arrest order, along with the material in their possession, to the Adjudicating Authority, in a sealed envelope.

Mehta argued that secrecy and confidentiality of the material in possession of the ED officials have been legislatively recognised. He added that PMLA being a sophisticated offence, it involves advanced technology, and any forewarning to the accused can result in the destruction of the entire trail. He urged the Court that the entire scheme of the PMLA should be seen holistically, and that its provisions should not be read in isolation while examining their constitutional validity. He suggested that the PMLA is aimed at both prevention and deterrence effects against money laundering. According to him, the petitioners’ contention that every penal law, including special laws like the PMLA, has to be in compliance with the CrPC is flawed.