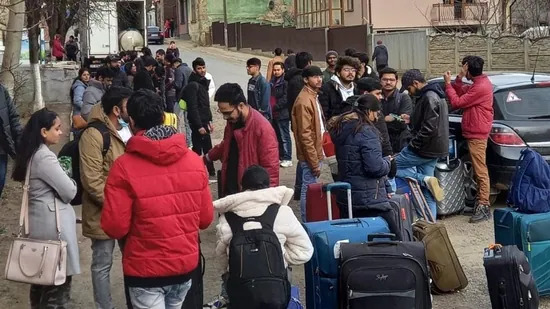 New Delhi, Mar 13 (PTI) A public interest litigation has been filed at the Supreme Court seeking directions on the issue of admission and continuation of studies in the country by Indian medical students who were recently evacuated from war-hit Ukraine.

The plea also sought directions to the Centre to provide a medical subject equivalency orientation programme for admitting them in the Indian curriculum.

The plea filed by advocate Rana Sandeep Bussa and others said that their writ petition seeks to invoke the most salient fundamental right guaranteed under Article 21 of the Constitution – the protection of life and personal liberty.

Since the outbreak of war between Russia and Ukraine, and the return of students from Ukraine, multiple petitions have been filed at high courts and the Supreme Court seeking direction to the Centre to facilitate the continuation of studies of Indian medical students who have returned from Ukraine in domestic colleges.

A petition has also been filed by Pravasi Legal Cell before the Delhi High Court seeking direction to the Centre in this regard.

The petition filed at the Supreme Court says that the Union Government has done a tremendous job in bringing Indian students back home but they are being deprived of their fundamental right to education.

It said the government has to step in and provide for the necessary integration of foreign medical students into the Indian medical curriculum.

“A lot of Indian students studying in Ukraine have been displaced from their medical universities and are forced to leave behind their medical courses in between and this war has caused the Indian medical students huge financial, mental, physical hardship including academic breakdown,” the plea said.

The plea said the National Medical Commission has allowed foreign medical graduates to complete their internship in India due to the ongoing war between Ukraine and Russia, “so in this backdrop, the government must consider the plight of these medical students.”