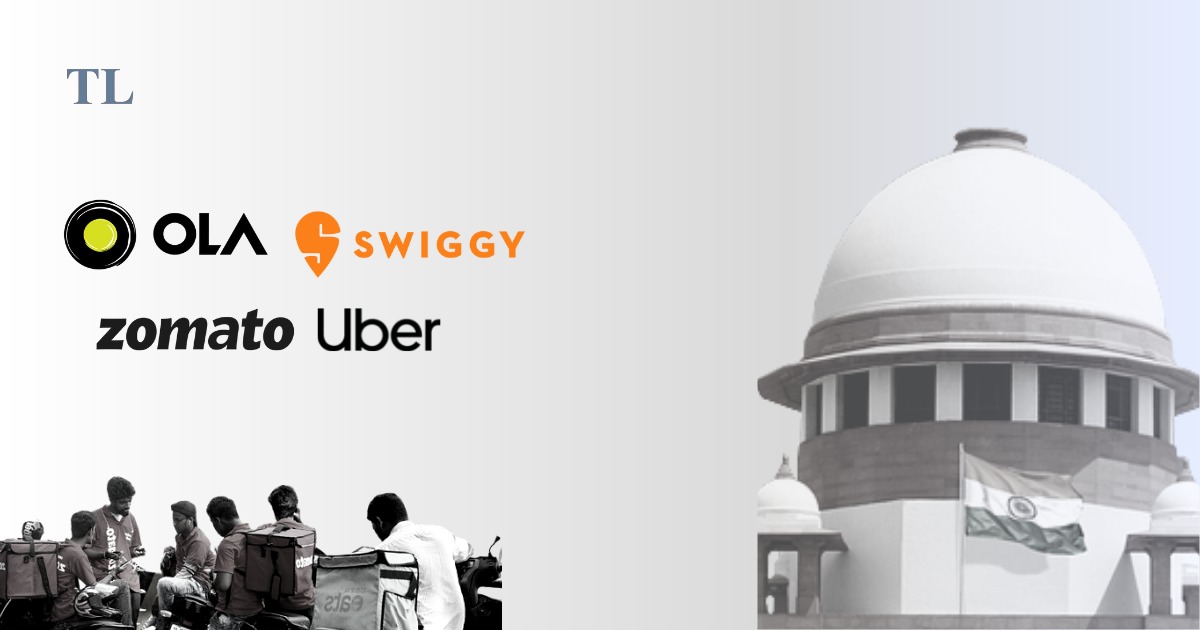 A petition has been filed in the Supreme Court urging the Court to direct the Central Government to extend social security benefits to “gig workers” and “platform workers” engaged by Uber, Ola Cabs, Swiggy and Zomato.

It asserts that the denial of social security like pension and health insurance to “gig workers” and “platform workers” is an affront to workers’ right to life and right against forced labour that are secured by Articles 14 (equality), 21 (right to life) and 23 (prohibition of traffic in human beings and forced labour) of the Constitution of India.

The petition has been jointly filed by a registered union and a federation of trade unions representing app-based transport and delivery workers, and two individual drivers who have worked with Ola Cabs and Uber.

The informal economy in which “gig workers” and the “platform workers” operate accounts for a third of the Gross Domestic Product and 70% of employment in an average developing country.

The plea seeks a declaration from the court that gig workers are “unorganized workers” and/or “wage workers” within the meaning of the Unorganised Workers’ Social Welfare Security Act, 2008, and hence entitled to be registered under the said Act.

In the alternative, the petitioners seek the benefit of the existing social security laws since according to them, the relationship between the aggregator and the driver is one of employer and employee.

“The mere fact that their employers call themselves “Aggregators” and enter into so-called “partnership agreements” does not take away from the fact that there exists a jural relationship of employer and employee between them”, the plea argues.

The said contracts, the plea states, are a mere device to disguise the nature of the relationship, which is de jure and de facto a relationship of employer and worker, being a contract of employment.

At present these workers are not being provided with the benefit of social security under any labour legislation. This, the plea claims, defeats the very purpose of the social welfare legislation, which seeks to ensure social security – a facet of the right to work and livelihood in decent work conditions under Article 21 of the Constitution, to the workers.

Last year, Parliament enacted the Code on Social Security, 2020 to amend and consolidate the laws relating to social security with the goal to extend social security to all employees and workers either in the organised or unorganised or any other sectors. This Code provides for the framing of schemes for unorganized workers that include “gig workers” and “platform workers”. However, the Code is yet to be given effect.

“The tragedy of the gig workers is that they are denied the benefits of social security both under the Acts applicable to the organised sector and the unorganised sector. This has led to their employment conditions being degrading and less than human sometimes, amounting to forced labour within the meaning of Article 23 of the Constitution”, the petition asserts.

Also Read: Hands that deliver food are struggling to feed themselves

It adds that the Central Government or the State Governments are required to frame schemes to cover different categories of unorganized workers under the Unorganised Workers’ Social Welfare Security Act to address their social security needs.

“Neither the Central Government nor the State Governments have registered the said workers, nor have they framed schemes thereunder which has resulted in denying them indefinitely the benefit of social security and fair and decent conditions of work”, the plea states.

The petition states that these workers have been adversely affected during the pandemic, mainly due to the lack of any law protecting them, resulting in the aggravation of the inequality suffered by them.

“Despite the precarity of employment and low earnings even during normal times, in the first and second phase of the COVID-19 pandemic, the conditions of the app-based workers further worsened and in addition to a loss of employment”, the plea states.

Citing a report by the Indian Federation of App-based Transport Workers, the petition claims that there has been a severe decrease of 80% in the average monthly income (from Rs. 25,000 to Rs. 5,000) of app-based transport workers, and there was no support from the state or the aggregators in ameliorating their conditions.

The petition cites two research studies that focused on the deteriorating working conditions: the decrease in earnings of app-based workers during the pandemic, and the denial of social security benefits like pension and health insurance.

Thus, the petitioners assert that the failure of the state to register them as “unorganized workers” or to provide them social security under the existing law is a violation of their rights under Article 21 of the Constitution, namely: the right to work, the right to livelihood; right to decent and fair conditions of work.

Besides, the petitioners relies on international conventions, namely the Universal Declaration of Human Rights, and the International Convention on Economic, Social and Cultural Rights, that assure that everyone has the right to a standard of living adequate for their health and well-being and that of their family, including medical care, sickness, and disability.

The petition has been settled by senior advocates Indira Jaising and Gayatri Singh and has been filed through Advocate-on-Record Nupur Kumar.