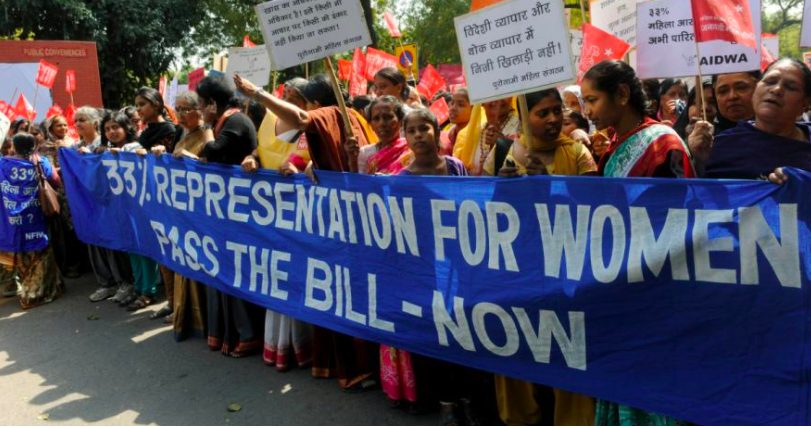 NewsClick·September 14, 2021
Home
Women and Children
Gender Rights
Several women’s rights organisations on Sunday demanded that the Women’s Reservation Bill, which is awaiting passage for 25 years, should be passed in the next session of Lok Sabha; they called on all political parties to ensure the same.

The women’s organisations on Sunday marked 25 years of the 108th Constitution Amendment Bill, popularly known as the Women’s Reservation Bill. It was first introduced on September 12, 1996. The Bill pushed for 33% reservation in all Lok Sabha and state legislative assemblies for women. – So far, the Bill has managed to only get the assent of the Rajya Sabha while it remains pending in the Lok Sabha.

Demanding that the Bill must be tabled and put to a vote without further delay, the joint statement of women’s organisations  said the both the ruling Bharatiya Janata Party (BJP), which has an absolute majority in the Lok Sabha, and the main Opposition Congress, had supported the Bill on record. “There is therefore no possible hurdle to the passage of this Bill,” it said.

They pointed out that mandatory reservations for women in Panchayats and Local Bodies facilitated the entry of lakhs of women in the political arena of cities and villages. “This has brought many important women’s issues on the agenda of Panchayats and local bodies. This positive experience needs to be strengthened and extended further,” they said.

“Successive Governments have stalled the Bill for the last 25 years on some pretext or the other. The Modi government has promised not-only-33%-we-shall-give-50%, but this also turned out to be a mere jumla,” the activists said. They further added that the current dispensation has not put the Bill to a vote citing a “lack of consensus”. “Why, may we ask, do they single out a Bill pertaining to women’s rights in decision making bodies? Why did they pass the contentious Labour Code and the 3 Agricutural Laws without any consensus?,” they said.

The United Front government led by H D Deve Gowda had first tried to pass the Bill in the Lok Sabha in 1996. The seats were to be reserved for female legislators on a rotation basis and would be reserved by the method of lots once in every three general elections.

When the Bill was first tabled in the Parliament in September 1996, it was forwarded to a Joint Parliamentary Committee, which submitted its report to the Lok Sabha two months later.

The report had recommended reservation for women of Other Backward Classes (OBCs) and extension of reservation to the Rajya Sabha and the legislative councils. Neither of these recommendations has been incorporated in the Bill.

In the last two and a half decades, the Bill has led to heightened drama in both houses of Parliament, perhaps revealing the ingrained patriarchy in the male-dominated political and executive spaces. It has also led to complete violation of the sanctity of the Parliament and exposed lack of civility. Each time the Bill was introduced, some people snatched it, tore it up and engaged in scuffles leading to the process being aborted.

In 1998, when the Atal Bihai Vajpayee-led government tried to re-introduce to the bill, Rashtriya Janata Dal MP Surendra Prasad Yadav got into the well of the House, snatched the Bill and shredded it in pieces. His example was followed by later male parliamentarians as well. Some MPs even attempted to physically attack the then Rajya Sabha chairman Hamid Ansari to disrupt the tabling of the Bill in 2010, however, it was passed in the Upper House that year.

NEED FOR WOMEN IN LEADERSHIP

There is growing evidence that women’s leadership in political decision-making brings in improvement. For instance, a research on panchayats in the country found that the number of drinking water projects in areas with women-led panchayats was 62% higher than in those led by men.

More women in the Parliament is expected to translate into gender sensitivity in budgeting and making of policies along with push for issues regarding gender inequality, gender based discrimination and violence.

Meanwhile, the representation of women in politics remains measly even as the female electorate is nearly half of total voters in most places. The ruling BJP has only 13% women MPs in the Lok Sabha after the 2019 general elections. With 78 elected women MPs, the current Lok Sabha has the highest number of women representatives ever. However, they only account for 14.39% of the entire house strength. The Rajya Sabha has 25 women MPs out of 245, just over 10% of the house, which in itself is a marginal increase from earlier numbers.