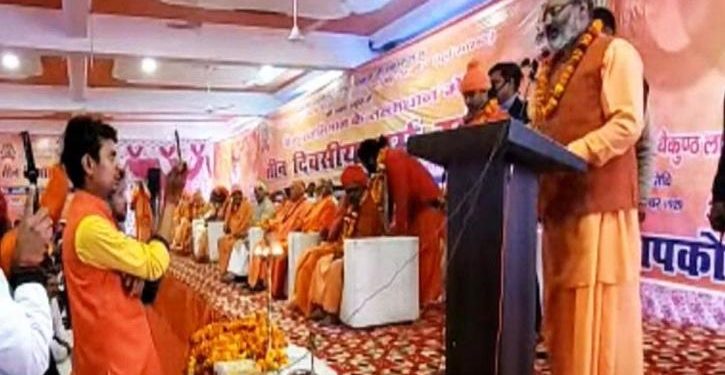 A ‘Dharam Sansad’ organized by Hinduvta militant leader and head priest of the Dasna Devi temple in Uttar Pradesh’s Ghaziabad named Yati Narsinghanand from December 17 to 20 at Ved Niketan Dham, Haridwar has come under scrutiny after some videos from the conclave, where participants can be seen articulating and encouraging plans to exterminate the Muslim population of India, have gone viral.

Speeches from the conclave seem to be exhorting Hindus to gather their arms and slay Muslims. Hindus were also, in these speeches, offered one crore rupees for following the footsteps of militant leaders Jarnail Singh Bhindranwale and V. Prabhakaran. These hateful utterances were made in the presence of several eminent Hindutva religious leaders.

Initially, no FIR (first information report) was registered, and no arrests were made, but with the increasing social media outrage over the last few days and the consequent public pressure, the Uttarakhand police finally decided to launch an FIR. Saket Gokhale, an All India Trinamool Congress national spokesperson, took the first step of filing a complaint against one of the participants Waseem Rizvi, also known by the name of Jitendra Narayan Tyagi, among others, for spewing hateful comments against a particular minority group.

The police took the complaint into consideration and filed an FIR against Waseem Rizvi and others. The offenders have been booked under Section 153A of the Indian Penal Code. This section aims to punish such people who aim to disturb the tranquillity and promote feelings of enmity between people belonging to different caste, race, religion, language, residence etc. However, the organizer of this hateful assembly, Yati Narsinghanand, is still at large.