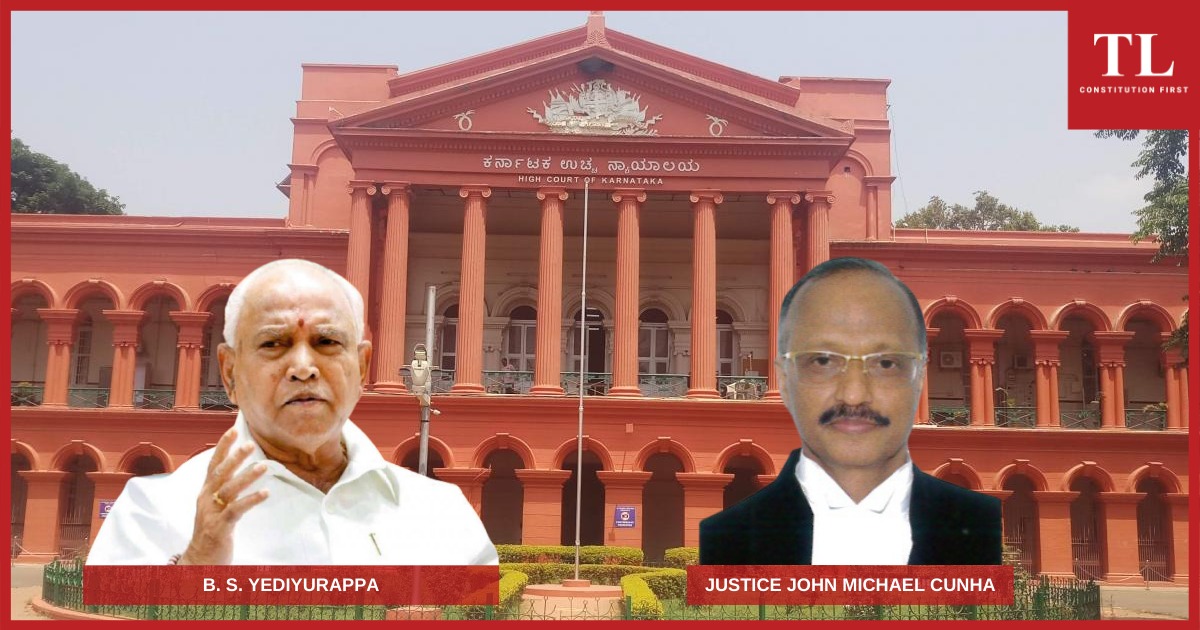 THE Karnataka High Court Wednesday gave the go-ahead to a criminal case that was registered against state chief minister B. S. Yediyurappa and two others in 2019 for allegedly offering a bribe of Rs.10 crore and a party ticket if the complainant Sharanagouda persuaded his father to resign as an MLA.

The case, known as “Operation Kamala”, led to the collapse of the then JDS-Congress coalition government.

Justice Michael Cunha while vacating the ex-parte stay of the criminal proceedings, observed that allegations against the petitioners were serious enough to attract the offences under sections 8 (Offence relating to bribing of a public servant) and 12 (Punishment for abetment of offences.) of the Prevention of Corruption (Amendment) Act 2018 as well as under sections 120B (Punishment of criminal conspiracy.), 124A (sedition), 171H (Illegal payments in connection with an election) and 506 (Punishment for criminal intimidation.) read with section 34 (Acts done by several persons in furtherance of common intention.) Indian Penal Code.

The court said the petitions were adjourned from time-to-time till February 28, 2020, and it was only on March 15 this year, that they were listed despite directions to list all pending criminal cases involving sitting and former legislators (M.Ps. and M.L.As), particularly those to who a stay had been granted.

“Surprisingly, these two cases did not figure in the lists submitted to the court, as a result, the directions issued by the Supreme Court in Ashwini Kumar Upadhyay vs. Union of India dated 16.09.2020 to hear the matter on a day-to-day basis and to dispose of the same expeditiously, within a period of two months therefrom could not be complied with”, Justice Cunha said.

Justice Cunha, thus, directed the registry to apprise the Chief Justice of the high court of the deliberate and intentional lapses in the listing of cases to the advantage of B. S. Yediyurappa to take appropriate action against the erring officials.

Justice Cunha was ruling on an application filed by the original complainant seeking a recall of the ex-parte stay of the criminal case against Yediyurappa and two others. He found that the ex-parte stay order was liable to be vacated since the complainant/informant had been arrayed as a necessary party to the proceedings and without his presence no effective relief could have been granted to the petitioners.

“Under the said circumstances, the petitioners having obtained an interim order without service of notice on the complainant/respondent No.2, in my view, he has to be treated as “a party against whom an ex-parte order was made”. He is, therefore, entitled, as of right, to apply to the court to discharge or vary the said order as per Rule 18(1) of the Writ Proceedings Rules”, Justice Cunha held.

He also cited the Supreme Court’s decision in Asian Resurfacing Of Road Agency Pvt. Ltd., & Anr vs. CBI,, wherein all the High Courts were directed that, where stay against proceedings of a civil or criminal trial is operating, the same will come to an end on the expiry of six months from the date of order i.e., 28.03.2018, unless extension is granted by a speaking order.

“No such extension having been granted in the instant cases, the interim order dated 22.02.2019 stands vacated by force of Article 226(3) of the Constitution of India and the orders referred above”, Justice Cunha said.

Even on the merits of the allegations made in the FIR, the high court opined that the contents of the complaint prima facie disclosed the commission of cognizable offences.

“Undeniably, the allegations made in the complaint, if found true, would not only establish the fact that petitioners had attempted to induce an elected representative to tender his resignation in return for a bribe of Rs.10 crores and promise of a seat to his son in the by-election, prima facie making out the ingredients of the offences under sections 8 and 12 of the Prevention of Corruption (Amendment) Act, 2018”, the court said.

It added that the allegations, if found true, would even attract the ingredients of the offences under sections 120B, 124A, 171H of IPC as the allegations and the material produced in their support clearly disclosed that an attempt had been made by the petitioners to excite disaffection towards the government established by law by “encouraging defection so as to topple the government with lure of money and position prima facie making out the ingredients of sections 120B, 124A and Section 171H of Indian Penal Code.”

The court said a thorough probe into the matter was needed and the ex-parte stay of the criminal case was liable to be lifted.