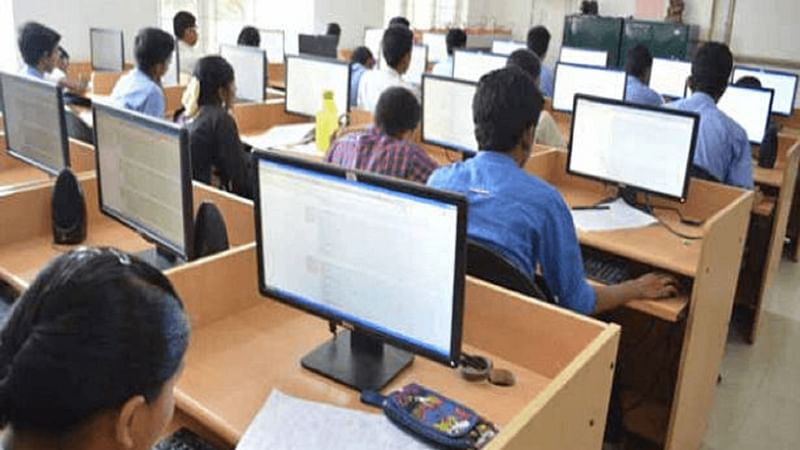 Coronavirus and the LawCOVID-19EducationGovernanceRight to Education

Online Exams and The Right to Equality

The pandemic has made online classes and online exams the new norm. However, in an unequal society the implications of the lack of technological penetration and access to technology poses major hurdles. A petition in Delhi High Court had challenged DU’s decision to conduct online exams wherein Common Service Centres will be set up for students with disabilities and those without access to technology. The author argues that this is violative of right to equality.

Imagine a university divides its students into two groups: A and B. Students in group A are allocated books, whereas those in group B are not. Group A students attend classes regularly, while group B students are not allowed to. Finally, the university conducts exams – group A students get to sit in an air-conditioned classroom; on the other hand, group B students are made to sit outside in the scorching heat. What will be the results of such exams? And will those results accurately reflect the capabilities of students?

The answer, intuitively, appears to be in the negative. After all, there was no level playing field. We would all agree that such an education process would be vitiated by inequality. Nevertheless, universities in India are embarking on a similar course of action by conducting online examinations during the COVID-19 pandemic. One may argue that the inequalities, in this case, are even worse.

Starting August 10, over 2.7 lakh final-year students of Delhi University (DU) will appear for open-book examinations (OBE) that will be conducted online.

However, numerous structural barriers make this entire process deeply unequal. The first issue is access to classes and study material.

DU attracts students from diverse geographical and socio-economic backgrounds. The pandemic has forced thousands of students to return to their hometowns, and complete the rest of the semester through online-classes. But many students are at a considerable disadvantage.

The ability to buy the requisite books and study material is a factor of one’s financial privilege.

To make matters worse, India is ranked 127th out of 201 countries in terms of internet penetration.

According to the NSS Report on Education (2017-18), only 24% of Indian households have internet facilities.

Access to digital technology is equally limited. Only 11% of the households have any type of computer (which would include desktops, laptops, notebooks,  and so on.

It is estimated that only 24% of Indians own smartphones.

Moreover, 20% of India’s households receive less than eight hours of electricity a day. Only 47% receive electricity for more than 12 hours. How are students in these areas with major power shortages going to study?

On the whole, there is extremely limited access to the most basic requirements for online education: electricity, internet, and technology.

This access is further skewed on the lines of class, caste, and gender. Perhaps the greatest indictment of this exclusionary system of education was the suicide of a 15-year old student, hailing from a poor Scheduled Caste family, who was distraught at not being able to attend online classes.

A brilliant student; she was extremely distraught at not being able to attend online classes. Her father, a daily wage labourer, could not afford a smartphone. On June 1, she reportedly died by suicide. Her death forces one to ask, at what cost are we transitioning to online education? And is it worth the exclusion, despair, and trauma we subject millions of disadvantaged students to?

A survey conducted by the Delhi University Teachers’ Association (DUTA) among 50,000 students showed that 85% of them were not in a position to appear for the open book examinations.

There are serious concerns about an unequal digital infrastructure.

India has crossed 2 million COVID cases. It won’t be a stretch to presume that many students, or their family members, might be infected.

West Bengal and Odisha are still recovering from Cyclone Amphan.

Assam and Bihar have been devastated by floods, with over 55 lakh people affected.

Apart from these tragedies, millions of families are struggling to make ends meet, due to an unprecedented economic crisis.

All these factors combined make it evident that a significant percentage of the student population is not in a position to appear for online exams.

On August 7, the High Court of Delhi passed an order, allowing DU to proceed with an online OBE for final-year students. (Anupam & Ors. vs University of Delhi & Ors.) The petitioners had contended that the online exams were discriminatory towards students who lacked the necessary cyberinfrastructure, or were stuck in quarantine zones or flooded areas. The Court, however, relied on assurances from the University — such as the availability of Common Service Centres (CSCs) for students with no cyberinfrastructure.

Another bench of the Delhi HC had previously directed DU to provide writers for visually impaired students at CSCs.

DU has also assured the Delhi HC that there will be grievance cells and helplines to address issues faced by the students. Finally, DU has claimed that students who could not take the OBE would be allowed to appear for physical exams in September this year. These safeguards were deemed sufficient by the Delhi HC to conduct exams in a fair and equitable manner.

However, these measures are the equivalent of placing a Band-Aid strip on a fracture. If the fundamental concern is that students did not have equal access to classes and resources in the first place, then what difference do Common Service Centres and grievance cells make?

These measures, at best, make it a little easier for students to write the exams; they do not remedy the inequality that plagues the entire learning process.

It is also patently discriminatory to suggest that visually impaired students or those without the requisite digital infrastructure must risk going to the designated centers to take the exams.

The counsel for the petitioners had argued before the Court, “Are we asking students to go out during this deadly pandemic and visit the Common Service Centres which could turn out to be hotspots? When right from the Home Minister to Chief Ministers have been affected, how can DU ask the students to go out in this environment and write exams?”

Lastly, the option of taking the exams physically in September also appears uncertain. India has seen a day-by-day increase in COVID cases in the past few months. It is unclear if this trend is likely to reverse by September.

Asking students to physically congregate for exams forces them to compromise on their own safety, as well as that of their families. In any event, the one month delay is likely to put them at a competitive disadvantage in an already cut-throat environment for jobs and higher studies.

The Right to Equality

The Preamble of the Indian Constitution promises to all citizens, in emphatic terms, equality of opportunity. Article 14 makes this promise concrete, by declaring that the State shall treat all persons equally.

How do we interpret this provision?

Is it meant to be equality that ignores structural injustices (the caste system, patriarchy, economic divide, and so on) and treats everyone the same? Or does “equality” take into account differential circumstances and opportunities?

The Constitution is founded on the latter vision and therefore provides for affirmative action policies [Articles 15 and 16]. Equality under the Indian Constitution is about identifying and remedying structural disadvantages, not turning a blind eye to them.

Applying this proposition to the present case, it is plainly unjust to expect students in such vastly different circumstances to be evaluated through the same examination procedure. Doing so is treating unequal as equals—something that violates the spirit of the Constitution.

Admittedly, even in the non-COVID affected world, several inequities influence educational outcomes. Caste, gender, class, and so on, play a huge role in access to knowledge and opportunities. It would be ignorant to suggest that our education system offers a level playing field in ordinary times. Nevertheless, what is important here is that these barriers have been compounded to an unprecedented level due to the pandemic.

The educational process has never been equal, but right now, it is at its most unequal. Conducting online exams in these circumstances is a great betrayal of the promise of “equality of opportunity” enshrined in the Preamble. It disadvantages the already disadvantaged and entrenches a cycle of privilege.

(Parth Maniktala is a final year LL.B. student at the Faculty of Law, University of Delhi. Views are personal.)