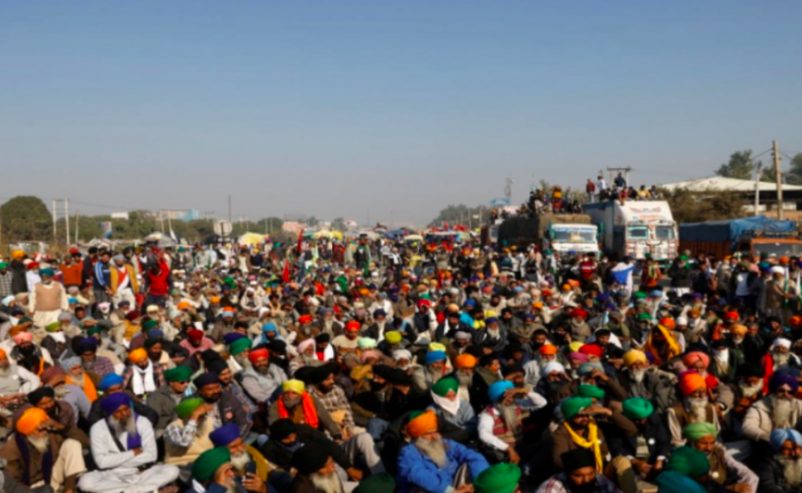 One Year of Farm Laws; Here’s how Protests Unfolded

September 17 marks one year of the passing of the Narendra Modi government’s three contentious farm Bills in Parliament. In 10 days, the Bills became Acts after getting Presidential assent.

The three laws are — The Farmers’ Produce Trade and Commerce (Promotion and Facilitation) Act, 2020, The Farmers (Empowerment and Protection) Agreement of Price Assurance and Farm Services Act, 2020, and The Essential Commodities (Amendment) Act, 2020.

The three laws together pave the way for corporate entry into production, marketing, storage and even pricing of agricultural produce and farmers fear that powerful corporate entities may even acquire control of their lands. It is also feared that the present system of support prices will get diluted and meaningless after these laws come into effect.

The three Bills, which were promulgated as ordinances on June 5, 2020, were introduced in Parliament on September 14. On September 17, Lok Sabha passed the two Bills.

While farmers in Punjab had started protesting against the ordinances in June itself, it was only after the Bills became laws that farmers hit the streets, setting the stage for their ongoing almost year-long protest at three sites on Delhi’s borders – Singhu, Tikri and Ghazipur.

Farmers under the Samyukt Kisan Morcha–an umbrella body of over 40 farmer unions – are demanding repeal of the three laws which they say not only deprives them of the fair MSP that was fixed by the state government but also allows their land to be taken away by private players.

Here’s a timeline of how the farmers’ protest, negotiations with the government unfolded after the laws came into being;

October 1: As many as 31 farmer unions begin indefinite rail roko agitation, blockading both goods and passenger trains across Punjab.

October 25: Farmer unions under the Samyukt Kisan Morcha (SKM) give Delhi Chalo call, plan to march to the capital to demand repeal of the laws.

November 26: Thousands of farmers from Punjab and Haryana who marched to Delhi in tractor-trolleys, were stopped from entering the Capital. At Delhi’s borders, they faced tear gas shells, water cannons and lathicharge. Thereafter, farmers begin camping at Singhu Border.

Also Read: Farmers to Protest Every Day Outside Parliament During Monsoon Session

December 1: Four-hour-long meeting between farmer unions and the Modi government remains inconclusive. Farmers reject Tomar’s offer to form a five-member committee to look into their concerns but agree to next round of talks.

December 3: Farmers furnish a 10-page document at talks with the Agriculture Minister, listing their objections to the laws, and demand complete rollback. Talks remain inconclusive after over seven hours, with farmer unions refusing to accept the government’s offer to amend the three laws.

December 5: Talks remain inconclusive as farmer unions’ harden stance, reiterates demand for total repeal of the three laws while the government sticks to only amendments.

December 8: At the call of SKM, Bharat Bandh observed across large parts of country in support of farmers demand for scrapping farm laws.

December 16: Farmer unions send written reply to Centre, rejecting draft proposal, saying it does not contain anything new and does not mention repeal of the laws.

December 25: PM Modi directly appeals to farmers in a public address that followed an online interaction with farmers. He asks farmers to return to the talks table and argue on facts.

December 26: Farmer unions agree to resume talks but present four riders, including modalities to repeal the three laws, ensurelaw on minimum support pricing (MSP), no penalty for stubble burning and amendments to the Electricity Bill 2020 to protect farmers rights.

December 30: Modi government accepts two of the four demands at the sixth round of talks. While the government agreed to exclude farmers from penal provisions of the Air Quality Management ordinance and to not pursue the draft Electricity Bill 2020, it refuses to repeal the laws.

January 8: Modi government hardens stance on not repealing the three laws at seventh round of talks; asks farmers to approach Supreme Court if they want.

January 20: Government climbs down at negotiations with farmer unions; offers to suspend farm laws for 1.5 years till dispute is resolved.

January 22: Talks remain inconclusive as farmer unions reject the government’s offer. Both sides fix no date for the next round of negotiations.

January 26: Violence in Red Fort and parts of Delhi as some farmers deviate from SKM’s route for Republic Day tractor rally.

February 3: Farmer unions begin Mahapanchayats to widen their support base for protests.

September 5: Mahapanchayat at UP’s Muzaffarnagar sees lakhs of farmers in attendance from across North India. Farmers pledge to continue to protest against the three farm laws, campaign against BJP in upcoming state polls.

September 27: Farmer unions to hold Bharat Bandh to protest one year of the passage of the laws.

Ahead of the Bharat Bandh, farmer union leaders said September 17 remains a ‘black day’ for farmers. “We are observing a black day. A year has passed and the Central government is so authoritarian and fascist that it has not taken any initiative to resolve the standoff,” said Jagmohan Singh Patiala, general secretary Bharatiya Kisan Union (Dakonda) and an SKM member.

“In the last year we have mobilised people from other states and mahapanchayats have been successfully held in UP and Rajasthan,” he added.

Farmer leaders said that they are ready for a longer haul, despite the passage of a year. “Our protest is going on so it doesn’t matter that a year has passed. Even if two years go by, it doesn’t matter as our struggle will go on and we will not step back till the laws are repealed. September 17 will remain the day that our elected representatives betrayed us by passing such anti-farmer laws,” said Jagjit Singh Dalewal, a senior SKM leader.