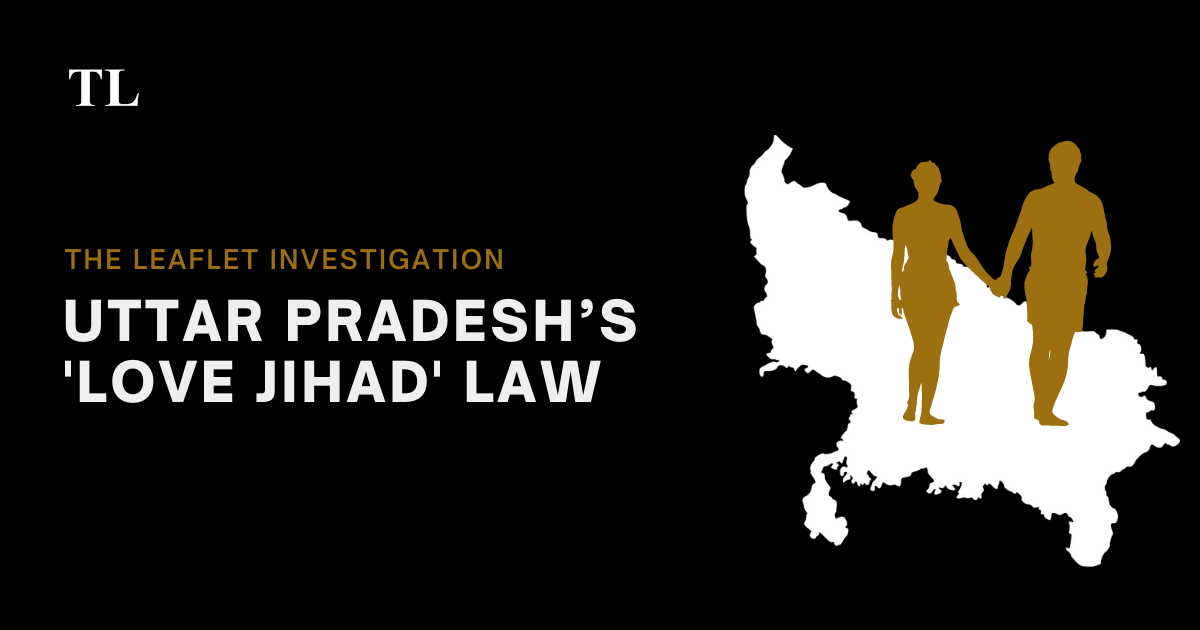 One year later: misuse of “love jihad” – 14 family members and peers arrested along with the accused secure bail

On November 28, 2020, the Bharatiya Janta Party-led Uttar Pradesh government passed the UP Prohibition of Unlawful Conversion of Religion Ordinance with the aim to curb forced conversion. Dubbed the law against ‘love jihad’, the issue is one that has been raked up by various right-wing groups, as well as the UP Chief Minister Adityanath, on several occasions. With the law completing its first anniversary, and with more than 108 FIRs registered so far, THE LEAFLET investigates the impact of the law on the lives of accused individuals, interfaith couples and several others.

This is the third in a multi-part series of reports from the field. The first and second parts can be accessed here and here respectively.

FOR the siblings of Shabab Khan, residents of Chiraiyakot in northeastern Uttar Pradesh’s Mau district, moving out of their neighbourhood was only a small price to pay. Little did they know that their family member’s falling in love with a Hindu neighbour would cost their entire family heavily.

38-year old Shabab Khan, presently lodged in the district jail, was accused of kidnapping and pressuring 30-year old Ayushi Verma, to convert to Islam. Khan reportedly worked as a driver at Verma’s household, and his family members told The Leaflet that they were in a relationship for over seven years.

From December 2020, 14 of his family members and friends were arrested and jailed after being named in the same first information report [FIR] along with Khan, under Sections 3 and 5 of the UP Prohibition of Unlawful Conversion Act. Other charges included Sections 366 (kidnapping, abducting or inducing a woman to compel mar­riage), 368 (wrongful concealing or confinement of a kidnapped or abducted person), 120B (punishment of criminal conspiracy), 420 (cheating and dishonestly inducing delivery of property) and 506 (punishment for criminal intimidation) of the Indian Penal Code, among others.

Today, more than a year later, all, barring Khan, have been released on bail by the Allahabad High Court. Lawyer Pradeep Singh Sengar, who secured bail for over eight of the accused, notes that “police failed to provide evidence” even though 11 members of Khan’s family, including three women, were jailed for aiding him in the alleged forced conversion and kidnapping.

Speaking to The Leaflet, Khan’s sister Fatima said that although her brother had been in a relationship with the woman, she was forced into marriage with someone of her caste (Sunar) and religion. “My brother is already married and even has a son. None of us knew he was having an affair with this woman”, Fatima said. She noted that Verma’s marriage was fixed for November 30, 2020 and she came to Khan’s house the night before. Fatima added, “She begged my brother to run away with her because her brothers would not allow the two of them to be together. My brother’s wife, and their son found out about the two of them only then”. Verma reportedly “threatened to kill herself” and “begged to run away”, following which Khan allegedly managed to convince his wife to help them run away to Kolkata to live with his relatives based there.

The police arrested both Khan’s wife Rumana (name changed upon request) and their son Nadeem for assisting the alleged conversion and kidnapping, although both were later released on bail. However, his wife said that the “threats and blackmail” by Verma left them “with no choice but to help”, adding that neither she nor any of her family members were aware of their relationship before nor had any plans to convert her.

Moreover, a driver, Yasir, as well as Khan’s friend Sukumar were also arrested for assisting in the purported kidnapping. Out on bail, Sukumar said that his friend “had no plans of running away with her”, noting that they only decided to leave for Kolkata after Verma’s pleas on the eve of her wedding. “Shabab just decided to hire a car and escape from Mau knowing that her family could get both of them into serious trouble. It was not pre-motivated, I merely helped my friend on Ayushi’s own insistence”.

Khan’s family members from Kolkata, including his sister, her husband and their son, as well as his elder brother Nawab and disabled younger brother Akbar, were also arrested on December 8, 2020. Close to six months after these arrests, police in Chiraiyakot went on to arrest Khan’s sister-in-law (Akbar’s wife) in May 2021. Of the 14 persons arrested, 11 were members of his family and the other three were the drivers Yasir, Dilshad and Sukumar. Khan’s 90 year old father, Islam, who is bedridden, was also named in the FIR but his family claims that though he was detained, police did not keep him in custody owing to his age and health condition.

Speaking over the phone from Kolkata, Heena (name changed upon request), Khan’s 36 year old sister, told this reporter that a police officer dressed in plain clothes, and Ayushi’s brother Pankaj came to their house in Kolkata in the first week of December 2020, to ask about her brother’s whereabouts. “Me and my family co-operated with the police and this woman’s brothers. We tried our best to help them locate Shabab and Ayushi. On 4 December, the policeman and her brother Pankaj, who had come all the way from Mau, told me and my husband to go out with them to look for the couple. A police van was waiting for us and we were simply taken away”, Heena said. Both Heena and her husband spent over one year in Mau’s district jail, before securing bail on December 15 last year.

Presently, Khan continues to remain in prison. Police arrested him outside of Mau on December 8, 2020, after he and Verma were apprehended following a complaint registered by the latter’s father, Prem Chand. The Leaflet tried to reach out to Verma and her family; however, her family declined to let anyone meet her. When contacted, Verma’s brother Pankaj refused to comment, saying that, “We do not wish to speak to anyone, the matter is closed from our side”.

Khan’s case is not the only one in Uttar Pradesh where the draconian law against forced conversion has been imposed on multiple family members. After the anti-conversion ordinance was passed on November 28, 2020, police booked 13 members of a Muslim man’s family for ‘criminal conspiracy’ after the accused eloped with a Hindu girl, in the central district of Sitapur. Later, in Jalesar town of UP’s western district of Etah, at least 14 relatives of an absconding man charged with forced conversion were reportedly booked in December 2020. In January 2021, a mob harassed the family of a 23 year old Muslim man hailing from Firozabad district, after he was charged with the anti-conversion law despite the woman’s (a major) statement saying she left home out of her own free will and married without conversion.

Meanwhile, Khan’s sister Fatima said, “No one is allowed to speak to Ayushi; her family has coerced her into silence and she is under a lot of pressure. Nobody knows what she is feeling. I just hope to get my brother back”.