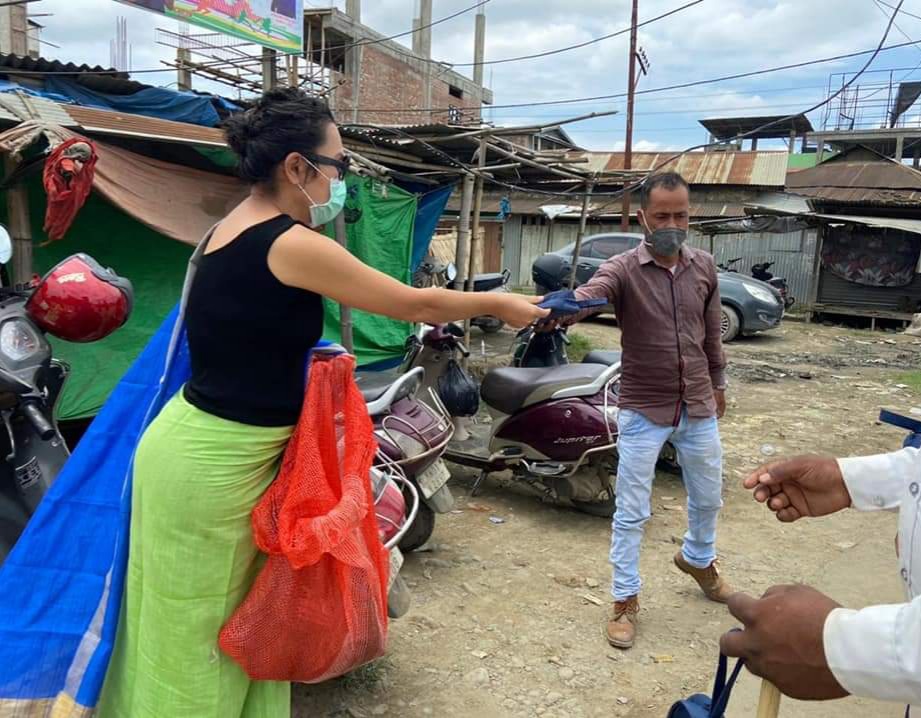 Nupi Manbi, a transgender community from Manipur, has managed to carve a niche in Imphal’s conservative society. While some have managed a modicum of social acceptability, many are still fighting for their basic human rights, with a lot forced to live away from the public eye. The COVID-19 pandemic has now added to the plight of this already marginalised community from Manipur, writes ANAND SINGHA.

THE transgender community has always had a substantial presence in the history of the world, especially in Hindu mythology and other religious texts. Nupi Manbi, which literally means “looks like a girl” in Meiteilon, is an indigenous trans women community in Manipur. Over the years, the community has struggled to make a space for itself in Imphal.

Santa Khurai, a trans rights activist and a poet from Khurai, Manipur, is considered a hero by many. As an indigenous Nupi Manbi herself, Khurai has been actively engaged in uplifting the lives of underprivileged trans men and women. During the pandemic, she has been occupied in relief work, procuring and distributing rations to members of the LGBTQ+ community. Khurai told The Leaflet, “The trans community has been the worst hit by the pandemic. Nupi Manbis have been working in Manipur for ages, especially in the beauty industry. Some work in fabric designing boutiques, and many in beauty salons. But things have changed since the lockdown. As someone who has a reach, I’m trying to do my bit to pull them out of this misery.”

Khurai is one of the most well-known trans women from Manipur. She set up one of the first trans-woman-owned beauty salons in the city. The salon has given her the financial liberty to live her life on her terms.

She, however, had a rough beginning in life. She reveals, “When I was a teenager, and at a very impressionable age, a bunch of men pinned me down in a dark alley some blocks away from my house. They forced me to say ‘I am a boy and I have a dick,’ and started beating me up with bamboo sticks. I couldn’t sleep properly for more than a week because of the physical pain. But more than the physical pain, it was the mental trauma. I decided that day, my body might break but my cause will not.”

Khurai recently chose to get married to her long-time partner Riyaz against her family’s wishes. This led to her getting disowned by her family.

But many trans persons, unlike Khurai, are not financially stable and are economically dependent on their families. The pandemic has also disproportionately affected their community, because of their already poor socioeconomic conditions.

In mainland India, most trans women end up begging for money at weddings and other cultural events, which require them to interact with people. Now, due to the lockdowns and social distancing in place, their primary source of income has been cut off. In Manipur, culturally, the Nupi Manbis have had recognition in films and the arts. Many trans women have featured in Meiteilon Leela (Manipuri Theatre) and have become household names.

However, Nupi Manbis are mostly prohibited from getting a formal education, which leads to them never qualifying for formal sector employment.

Nevertheless, in Manipur, their community has created a hub for themselves in Khurai and Imphal. These cities are booming with beauty parlours run by these trans women.

Ebomcha Lei, a trans woman from Imphal, had to leave her life in Assam because of the pandemic. The lockdown had led to her losing her job because of downsizing at her workplace as a result of the lockdown.

Upon reaching home, Ebomcha didn’t receive a warm homecoming. She says, “I thought coming back to Manipur would put my mind to ease, but the difficulties have only begun. Upon reaching home, my neighbours starting harassing me and my family. They told me to go somewhere else, as I am bringing corona with me. I feel broken as my family is going through much trauma because of me. If only I were a normal lady, they wouldn’t dare say a word.”

“I have been separated from my friends and people who accepted me while I was working in Assam. I no longer have a job, and because I’m a trans woman, no one would hire me. They sneer and scoff. It’s hard to make ends meet.”

More vulnerable to COVID, yet not able to access vaccination

According to the National Centre for Transgender Equality (NCTE), a US-based non-profit, trans people are five times more likely to be living with HIV compared to the general population.

Because of the compromised immune system that HIV causes, many from the community are at greater risk of mortality from COVID-19.

“Trans adults are also more likely to rate their health as poor or fair in comparison to others. More than 1 out of 5 transgender adults have at least one or more chronic conditions, such as diabetes, arthritis or asthma,” according to the NCTE.

Many from the LGBTQ+ community are not even coming forward to get vaccinated because of the stigma attached to them. Bobby Leishram, a trans man from Churachandpur, Manipur, and member of All Manipur Nupi Manbi Association (AMANA) told The Leaflet, “When I went to get my first jab, people were mocking me which made me really uncomfortable. Some don’t even turn up for the drive so that they can avoid this gaze from the public. To stand in the queue for sometimes hours and constantly go through the unwanted gaze is nerve-wracking.”

The fact that most such people do not even possess a basic ID card, a bank account, and health insurance makes it unlikely that they benefit from any State aid.

Also read: Rs 1500 given as subsistence allowance to 6440 transgenders during lockdown: Social Justice Minister to LS

During colonial rule, the British government passed the Criminal Tribes Act, 1871 targeting numerous castes in colonial India. This was, among other things, an attempt at regulating the conduct of the trans community in the country.

The Act created a category of “Eunuchs” and deemed them as an inherently criminal tribe. It also mandated the registration and surveillance of this community. The Act was repealed post-independence.

In 2014, the Supreme Court delivered a remarkable judgment in the case of National Legal Services Authority vs. Union of India & Ors. (AIR 2014 SC 1863) marking a landmark for the over 4.88 lakh transgender persons in India. The apex court declared transgender people the ‘third gender’ and gave them all the right to self-identify themselves as male, female, or the third gender, granted legal recognition to their gender identity, and issued a host of directions to union and state governments to take steps to actively protect their rights under Part III of the Indian Constitution.

The COVID-19 pandemic has also aggravated the mental trauma present within the trans community. Many people have lost their jobs, and are forced to vacate their houses due to inability to pay their rents.

Many pockets have emerged within Imphal, wherein more than ten Nupi Manbis are confined inside a single room. They have been ostracized by society, which has left them feeling alienated and depressed.

Dr. Dipika Jain, a psychologist from Assam, explains, “The people within these communities are constantly getting exposed to feelings of worthlessness, leading to many anxiety disorders and almost an existential crisis. A good chunk of their lives is spent getting over the abuse and coming to terms with their identity. Lack of acceptance can sometimes even lead to suicidal feelings. The discrimination was already there long before the pandemic even started, but with the covid crisis, the issue has heightened to an extreme.”

Even with the relief packages announced by the union and the state governments for the underprivileged in distress, the transgender community will probably never benefit from it. It is very difficult to estimate the number of trans women and men residing in a given state. Several of them are still without any identity card that certifies their gender, and many are not covered under the public distribution scheme. These marginalized communities are being excluded from major relief programs, and are further pushed into destitution.

The only way to provide for them is through grassroots NGOs and local community-based organizations that are relentlessly working for their upliftment. But their resources are drying up as well.

(Anand Singha is a student of the Symbiosis Institute of Media and Communication, Pune, and is an intern with The Leaflet.)