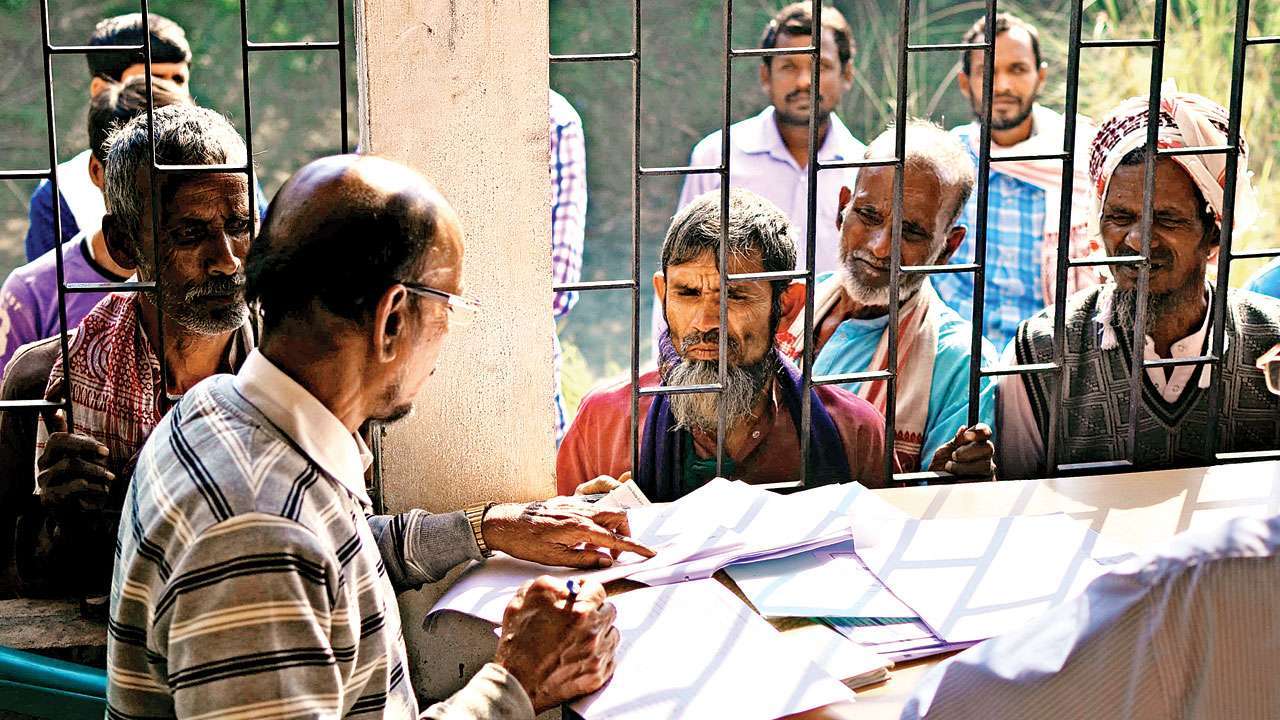 [dropcap]T[/dropcap]HE Supreme Court of India recently held out a little relief to “foreigners” in Assam who also found their names in the draft National Register of Citizens (NRC), by giving them the liberty to invoke the court’s writ jurisdiction to agitate their claim for citizenship. But in doing so, the court not only rejected petitioners’ plea to be allowed the right to appeal against the opinions of the Foreigners’ Tribunal if their names also appeared in the citizenship register, it also curiously, ignored the findings of a  coordinate bench of the apex court in a similar matter that had given primacy to the NRC.

However, a better analysis of the much-awaited verdict of the Supreme Court in a batch of matters leads by Abdul Kuddus Vs. Union of India, on May 17, 2019, will only be possible by understanding the issues involved and the contentions raised by the parties.

While hearing the matter of Abdul Kuddus, a resident of Assam who had been declared a foreigner by the Foreigner’s Tribunal on February 18, 2019, a Supreme Court bench comprising the Chief Justice of India (CJI),  Ranjan Gogoi and Justice Sanjiv Khanna, when informed that Kuddus’ name also appeared in the final draft of the NRC for Assam along with his family, directed the case to be listed before the bench hearing the main NRC issue.

The reason for placing Kuddus’ petition before the NRC bench was because the Schedule to the Citizenship (Registration of Citizens and Issue of National Identity Cards) Rules, 2003 (the “2003 Rules) stipulated that a person who had been declared an illegal immigrant or foreigner by the competent authority would not be included in the consolidated list or the final National Register of Citizens set to be published by July 30, 2019. As a result of this conflict between the ongoing NRC process and the opinions of the Foreigners’ Tribunal, the court perhaps had initially thought it fit to list the matters before the bench that was already overseeing the updating of the citizenship register.

Subsequently, 15 separate special leave petitions (SLP) came up before the Supreme Court involving the identical issue; each of the petitioners was persons who had been declared foreigners and had found either their own names or that of their blood relatives in the draft NRC. These were tagged along with Abdul Kuddus.

The common thread running through all the SLPs was that the findings of the Foreigners’ Tribunal with regard to the petitioners or their relatives were being used to assail their citizenship claims even though their names were in the NRC.

Interestingly and as pointed out earlier, in a similar situation where the names of a declared foreigner or their relative was included in the National Register, a coordinate bench of the Supreme Court headed by Justice Rohinton Fali Nariman had set aside the findings by the Foreigners’ Tribunal declaring such person an illegal immigrant and had disposed of the matter solely on the basis of the inclusion of their name in the draft NRC.

Conflict within the 2003 Rules

When Abdul Kuddus came up for hearing before the Court, it was listed before a bench presided by the Chief Justice of India Ranjan Gogoi along with Justices Deepak Gupta and Sanjiv Khanna and not before the NRC bench, as had been directed by the court itself in its order dated February 18, 2019.

Kuddus’ lawyers argued that a person, who had been declared a foreigner by a Foreigners’ Tribunal and also found their name in the citizenship register, should be allowed to file an appeal as per Paragraph 8 of the Schedule to the 2003 Rules. Paragraph 8 lays down the provision of an appeal for persons “not satisfied with the outcome of the decisions of the claims and objections”.

They als0 argued that the decision of the Foreigners’ Tribunal, being merely a summary opinion, was more in the nature of an executive order and could not, therefore,  be considered a decision or judgment for the purpose of Paragraph 3(2) of the Schedule to the 2003 Rules. As a result,  a matter that had been disposed of by the tribunal could not be regarded as one that had already been adjudicated upon  (res judicata), precluding the court from hearing the same issue again.

When posed with the question of there is no provision for an appellate authority under the Foreigners (Tribunals) Orders 1964, it was also suggested that the Supreme Court create an appellate forum by exercising its jurisdiction under Article 142 of the Constitution of India – that power being wide enough to be invoked in order to do complete justice; in this case an opportunity to appeal against the determination by the Foreigners’ Tribunal where the names of such persons or their close relatives had been found in the NRC.

The state of Assam and the Government of India for their part claimed that under the provisions of paragraph 3(2) of the Schedule to the 2003 Rules, the opinion given by the Foreigners’ Tribunal would prevail, notwithstanding the executive exercise of preparing the NRC.  This was countered with the argument that persons whose names were included in the register but were subsequently deleted on the grounds that they were foreigners had the right to appeal to an appropriate forum against their exclusion.

The Verdict – Findings of the Foreigners’ Tribunal is final

The detailed Abdul Kuddus judgment, authored by Justice Sanjiv Khanna, unanimously rejected the contentions advanced by the petitioners, both with regard to the conflict between Paragraph 3  (which excludes declared foreigners from being included in the NRC) and Paragraph 8 (which allowed for an appeal against non-inclusion in NRC before the Tribunal) of the Schedule to the 2003 Rules as well as the suggestion that the court should, by way of a judicial pronouncement and in exercise of its powers under Article 142, create an appellate forum to deal with such issues.

The court, while examining the provisions of the Citizenship Act, 1955, in particular Section 6A, the 2003 Rules and the Schedule thereunder, said  it was clear by a reading of paragraph 3(2) of the Schedule to the 2003 Rules that persons who had been declared to be illegal migrants could not be included in the National Register of Citizens:

“It is obvious to us that the persons covered by sub-para (2) paragraph 3 of the Schedule i.e. persons who have been declared to be illegal migrants or foreigners by the Competent Authority fall in a separate and distinct class and in such cases, no enquiry or investigation is required to be conducted in terms of sub-paragraph4. Such persons cannot, in terms of the specific language used in sub-para (2) to paragraph 3 of the Schedule, be included in the National Register of Citizens. The reason as is evident is that their citizenship status has already been determined by the competent authority. A person once declared an illegal migrant or a foreigner cannot claim or put forth a claim to the citizenship of India on the basis that he/she has been residing in the State of Assam.”

No to an appeal, but writ allowed in certain cases

In cases where there was a conflict in the findings of the Tribunal  with regard to an individual and those involving their close relatives in the Family Tree hearing of the NRC, the court held that the aggrieved person would be at liberty to invoke the writ jurisdiction, or if necessary, review jurisdiction before the High Court or the Supreme Court to ensure that no injustice was done. Any order passed in cases of close family members subsequent to an adjudication by the Tribunal would necessarily be material evidence which could be duly considered while deciding a writ petition or a review application. But in the same breath, the creation of an appellate forum was rejected by the court.

Strengthening the powers of the Foreigners’ Tribunal; unresolved contradictions

The judgment sought to address the conflict between the decisions of the Tribunal and the inclusion of names in the NRC while relying heavily on paragraph 3(2) of the Schedule to the 2003 Rules and strengthening the powers of the Tribunal constituted under the Foreigners’ (Tribunals) Orders, 1964.

It is interesting to note that while subparagraph (2) of Paragraph 3 provides that the names of persons declared as illegal migrants or foreigners will not be included in the NRC, subparagraph (1) of the same says after the scrutiny of applications with the official records, “the persons, of whom the information is found in order, shall be eligible for inclusion of their names in the consolidated list” (Emphasis added).

The right to appeal provided under Paragraph 8 of the Schedule to the 2003 Rules has also been limited to only those persons who had filed claims and objections and against whom there was no prior decision by the Tribunal.

Abdul Kuddus and the curious case of the coordinate bench

In Abdul Kuddus, petitioners were challenging their adjudication as illegal migrants by the Foreigners’ Tribunal and had found, during the course of their hearing, that their names or that of their close family members had been included in the draft NRC.  Leaving the conflict still unanswered, the only recourse that the court seems to have given the petitioners is recourse to a writ petition or review application before the high court or, where applicable, the Supreme Court, while still holding them ineligible for inclusion in the NRC.

While accepting that the appearance of a person’s name or that of a close relative in the family tree hearings would be considered “material evidence”, it refused to accept that there existed a conflict in law, particularly in case like that of Abdul Kuddus, where a person declared to be foreigner by the Foreigners’ Tribunal had been qualified to be included in the citizenship register.

What is also curious is the absence of any reference to the orders passed by the coordinate benches of the court in similar circumstances – a view that was contrary to the Abdul Kuddus judgment. Equally curious was the sudden change of the bench hearing the matter.

We now have a situation where an individual who finds their name in the NRC, is still declared a foreigner because the Supreme Court has held that the opinion of the Foreigners’ Tribunal will be final.

Under these circumstances, the Tribunal must uphold their fundamental constitutional promises and function with complete independence, without any hint of arbitrariness or discrimination in the adjudication process.