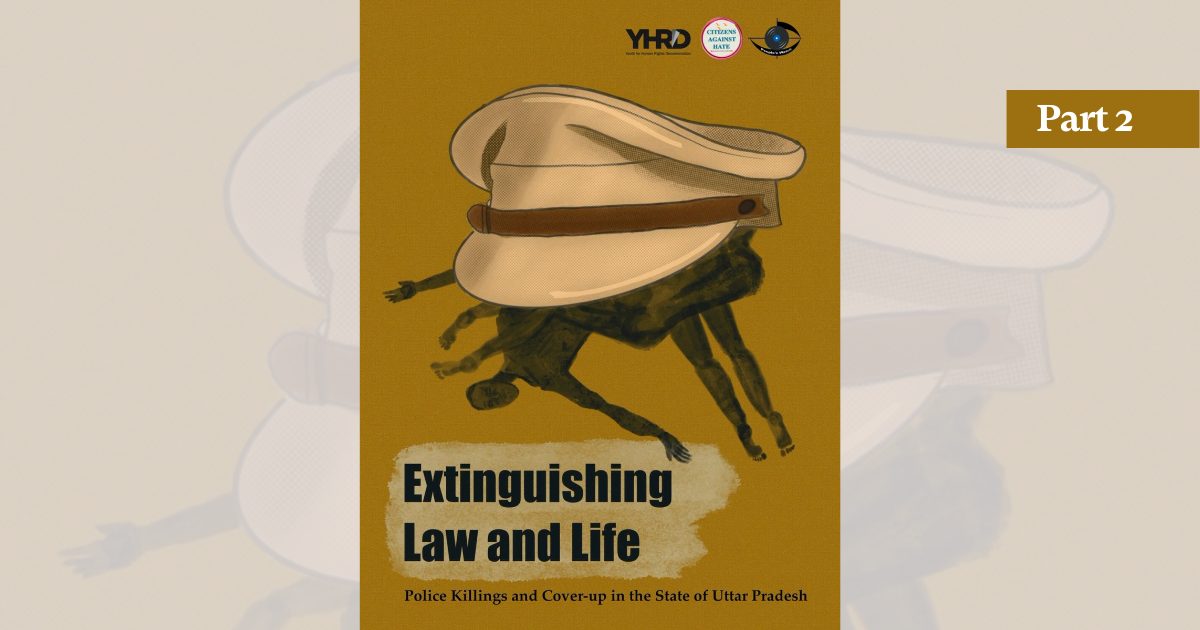 Normalising Extrajudicial Killings in UP: How investigation was tainted from initiation to Closure Report

This is the second article in a three-part series by V.VENKATESAN on the nature of extrajudicial killings in Uttar Pradesh. The series is based on the report, “Extinguishing Law and Life: Police Killings and Cover-up in the State of Uttar Pradesh” brought out by three human rights groups on October 29. The report throws light on how the state and the National Human Rights Commission (NHRC) exploited the ambiguities in the law to cover up fake encounters and shield the accused.

THE law on extrajudicial killings has evolved, thanks to the guidelines laid down by the Supreme Court in the PUCL case in 2014, and by the National Human Rights Commission (NHRC).

In violation of the NHRC/PUCL guidelines, in a majority of the cases analysed in the report, the initial investigation was conducted by a police officer from the same police station. The investigating officer, in most cases, was of the same rank as the police team which was involved in the killing. The investigation was later transferred to another police station, to show compliance with PUCL guidelines, although the breach of the guidelines had already occurred.

The initial hours just after the incident is the most important period for the investigation. If the collection and securing of evidence from the scene of crime is carried out by the police from the involved police station, and not from an independent investigating team, it would severely compromise the chances of an effective investigation. It is highly probable that officers from the same police station may want to protect their immediate colleagues from being prosecuted for murder, says the report.

The Role of the Magistrate

In 16 of the 17 cases analysed in the report, the IO filed Closure Reports (CR) before the Judicial Magistrates (JM). In 11 out of these 16 cases, the JM accepted the CR filed by the police, closing the case, without any further investigation. The status of the remaining cases could not be ascertained from the information available. In each of the 16 cases, the CR confirmed what the FIR stated. Even the factual contradictions in the police version of the events that emerge from the Post Mortem, Forensic and Ballistic Reports were overlooked by the investigating team, and a CR was filed in all these cases.

The CRs all state that upon investigation, the “police encounter” was found to be genuine. They further state that the deceased victims – who they have made an accused in the FIRs – are dead, and that the police could not find any information about the identity of the unknown accomplice. In 11 out of 16 cases where a Closure Report was filed by the police, the concerned JM unquestioningly accepted the CR, the report found.

In the Andhra Pradesh High Court’s judgment in A.P. Civil Liberties Committee vs. State of Andhra Pradesh (2007), upheld by the Supreme Court in its order in Andhra Pradesh Police Officer’s Association vs. A.P.Civil Liberties Committee (2019), it was noted that the Magistrate has the discretion to disregard the CR submitted by the police. The law laid down by the Supreme Court provides that in the event the Magistrate decides to accept the CR filed by the police, the former must give notice to the complainant in the FIR and provide opportunity for the Complainant to be heard at the time of consideration of the CR. Further, the complainant/victim is also allowed to contest the CR by filing a protest petition. This allows the complainant to participate in the legal process and compels further scrutiny of the police version.

In the present cases, the Magistrates issued notice to the relevant police officer from the encounter team on whose statement the FIR was registered, and not to the victim’s family. This police officer was technically the complainant in the FIR. In these cases, this officer sent a letter to the Magistrate stating that he had “no objection” to the CRs. The Magistrate took note of this “no objection letter” and accepted the CR, bringing the investigation into the death caused in police firing to an end.

In this way, the court did not provide the crucial oversight it should have in any of the cases studied in this report. Instead, the determination of whether or not a case would proceed to trial depended on the opinion of the police officer involved in the killing in the first place. In the process, the victim was also not able to participate in the proceedings. The fact that this happened on the watch of a JM, who is vested with the power to ensure a fair investigation in such cases, is of particular concern. The JMs have legitimized unconstitutional and illegal actions by the police, the report has concluded.

The JM did not record in 11 cases analysed, that FIR was not registered against the police officers, did not question the police about the egregious violation.

The JMs also allowed the police to not comply with the NHRC/PUCL guidelines in other ways. They accepted that the investigation can be closed on a plea of self-defence at the stage of investigation, without any further examination in trial.

The plea of self-defence can be only proved in a trial. It would be legally incorrect to close the case simply because the police officer claimed that the death was caused in self-defence during a shootout, or was caused during the legitimate exercise of the police’s power to arrest (as conferred by Section 46 of the Criminal Procedure Code).

In the majority of the cases studied for this report, the JM also ignored the fact that the collection and securing of evidence from the scene of crime, at least at the initial stage, was done by police officers belonging to the same police station as the police party involved in the shootout. It was not done by an independent investigating agency, as mandated by the guidelines of the NHRC and the Supreme Court.

This is tantamount to the complainant carrying out the investigation themselves. It violates the proposition of criminal law that the informant and the investigator must not be the same person. It goes against the principle that justice must not only be done but must appear to be done. The JMs have erred in overlooking this violation by the police team conducting the investigation. This goes to the root of the material presented as evidence and raises suspicions of fabrication of evidence, the report observes.

Analysis of legal records in the 17 cases supports the argument that the JMs did not apply their mind to these cases, and did not examine the evidence before accepting the CRs.

The post-mortem reports of the deceased victims are not consistent with the police version as contained in the FIR and later the CR. The police claimed that minimal force was used against the deceased victims during each encounter. The bodies of 12 of the victims show gunshot wounds on the torso, abdomen and even on the head. The bodies show multiple gunshot entries, not just one or two gunshot wounds that would be ordinarily necessary for “immobilizing” them, the report has found.

Police are trained (a claim reiterated by the police in their FIRs) to shoot in a targeted manner below the waist, and to incapacitate without killing, in accordance with the provisions in the Police Manuals and prevalent policing norms.

There is little evidence to show that the bullets were aimed at the lower part of the victims’ bodies to immobilise them and ensure their arrest. Instead, from the pattern of gunshot wounds to the head, chest and abdomen, it appears that the police used lethal force with the knowledge and intention to cause death.

The dead bodies also show fractures, even on the upper body, which is again inconsistent with the police version that they merely retaliated in self-defence. These fractures, in fact, lend credence to the narrative of the victims’ families: that the deceased were abducted or “picked up” by the police prior to the “encounter” and possibly subjected to torture, the report adds.

Post-mortem reports of five deceased victims, namely – Ikram, Mansoor, Waseem, Qasim and Noor Mohammad – show blackening and tattooing around the bullet entry wounds, indicating firing from close range. If the deceased were shot from close range, it is harder to understand why they were shot on their abdomens and not on their legs if the shooting was in self-defence, the report asks.

Also read: SC imposes Rs. 7 lakh costs on UP govt for making the father of a son killed in a police encounter “run from pillar to post”

Other irregularities in police’s version of events

In every case, the police version is that the deceased victim and his accomplice opened indiscriminate fire and shot at the police party. Interestingly, out of the approximate 280 police personnel involved in these 17 police killings, only around 20 police officers sustained injuries. Moreover, in 15 out of the 17 cases analysed, the FIR and police medical records show that the police sustained only minor injuries, like abrasions and lacerations, on their hands, feet and legs. Based on the medical records, it appears that these 18 alleged criminals used minimal force against the police.

In seven cases – pertaining to the deaths of Kasim, Waseem, Noor Mohammad, Ehsaan, Mansoor, Furqan, and Jaan Mohammad – the record shows that the fingerprints of the deceased victims were not found on the weapons recovered by the police from the scene of crime. This means that apart from the police’s oral claim, there is no evidence to show that the victims even held weapons in their hands in order to open fire at the police party, the report mentions.

In the case of Noor Mohammed, medical records show that a police officer sustained two bullet wounds. However, the ballistic examination does not indicate that these bullets are from the recovered weapons of the deceased or his accomplice. In the same case, one bullet proof jacket shot with bullets was produced. However, there is no evidence to connect these bullets with the weapons recovered from the deceased victim or his accomplice.

As per the FIRs in the 17 instances of police killings, at least 16 bullet proof jackets were claimed to be shot at by the deceased victims and their accomplices. However, there is very little effort to connect the bullets found in the bullet proof jackets with the weapons claimed to have been recovered from the deceased victim and his accomplices.

The JMs ignored factual inconsistencies in the police investigation. Despite the repeated mention of a secret tip off as the origin of the incident, in many cases, this purported tip-off is not reflected as an entry into the General Diary or Daily Diary of the Police Station, or through a phone call or text message record on the phones of the police officials. Contemporaneous record of the tip is a mandatory legal requirement to test the veracity of the police claim, which is often produced after the incident, the report adds.

TOMORROW: How the State and the NHRC exploited legal ambiguities to shield the accused.

(V.Venkatesan is the editor of The Leaflet. He has more than three decades of experience in journalism, and has extensively reported and commented on legal issues. The views expressed are personal.)