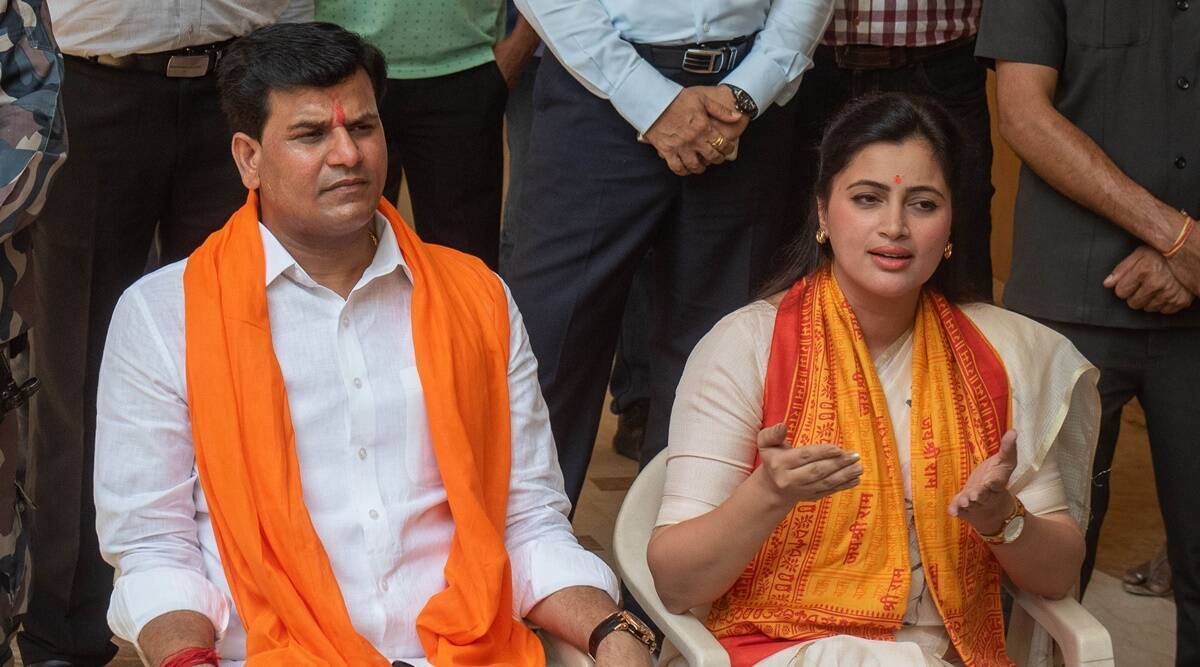 The Leaflet·May 6, 2022
Home
Criminal Justice
Mumbai, May 6 (PTI) MP Navneet Rana and her MLA husband Ravi Rana have “undoubtedly crossed the line of freedom of speech” guaranteed under the Constitution, but mere expression of derogatory or objectionable words may not be a sufficient ground for invoking the charge of sedition against them, a special court here has said.

It also said that the couple’s announcement to recite Hanuman Chalisa outside Maharashtra Chief Minister Uddhav Thackeray’s house here did not have the intention of “subverting the government by violent means”, and although their statements are “blameworthy” they cannot be stretched too far to be brought under the ambit of the sedition charge.

Special court judge R N Rokade made these observations while granting bail to the lawmaker couple on Wednesday. A detailed copy of the order was made available on Friday.

The court held that prima facie at this stage the charge under Indian Penal Code (IPC) section 124a (sedition) was not made out against the couple.

The Mumbai police had last week opposed the couple’s bail plea, saying that while on the face of it their plan looked innocent, it was in fact a “big plot” to challenge the state government. The plan was intended to cause a collapse of the law and order situation and then seek for dissolution of the present government by the Governor of Maharashtra, it had said.

When the use of words has the pernicious tendency or intention of creating public disorder or disturbance of law and order then the provisions of sedition are attracted, the police had said.

However, taking a note of the transcripts of the couple’s speeches, the court said, “Undoubtedly, the applicants have crossed the lines of freedom of speech and expression guaranteed under the Constitution. However, mere expression of derogatory or objectionable words may not be a sufficient ground for invoking the provisions contained in section 124A of IPC.”

“The provisions would apply only when the written and spoken words have the tendency or intention of creating disorder or disturbance of public peace by resort to violence. Therefore, though the statements and acts of applicants are blameworthy, the same cannot be stretched too far to bring within the ambit of section 124A of IPC,” it said.

The Mumbai police had arrested the Ranas on April 23 following their announcement of reciting Hanuman Chalisa outside ‘Matoshree’, Thackeray’s private residence in suburban Bandra. They were booked under various provisions of the IPC, including charges of sedition and promoting enmity. The couple walked out of jails on Thursday, a day after getting bail.

The Ranas in their bail plea had claimed that the call to recite Hanuman Chalisa outside ‘Matoshree’ cannot be said to be an act to promote feelings of enmity or hatred and the charge under section 153(A) cannot be sustained.

Referring to section 124A, the court said a plain reading of the section would show that its application would be attracted when an accused brings or attempts to bring into hatred or attempts to excite disaffection towards the government established by law in India, by words either written or spoken or visible science or representations, etc.

The court noted that it is well-settled that section 124A cannot be invoked to penalise criticism of persons for the time being engaged in carrying on administration or strong words used to express disapprobation of the measures of government with a view to their improvement or alteration by lawful means. Similarly, comments, however strongly-worded, expressing disapprobation of actions of the government, without exciting those feelings which generate the inclination to cause public disorder by acts of violence, would not be penal.

“It is pertinent to note that on perusal of the FIR, it is not the case of the prosecution that the said announcement (of Hanuman Chalisa recitation) was made with an intention to incite people to create disorder by acts of violence. The said announcements do not in any manner have the tendency of subverting the government by violent means, nor do the same have the effect of creating hatred, disaffection or contempt for the government,” the court said.

On the transcripts of the speech submitted by the prosecution, the court said, “Prima facie, it appears that the applicants have used certain expressions and sentences against the chief minister, which are extremely objectionable.”

It is to be noted here that political leaders play an important role in facilitating peace and tranquility. Their vitality is appreciated due to the fact that they have followers who believe in what they say and act accordingly. Therefore, politicians and other public figures have greater responsibility, it said.

The court added that it may be noted that neither the applicants called anyone to bear arms nor any violence was incited in general as a result of their speech.

“In this view of the matter, I am of the considered view that prima facie, decisive ingredients of section 124A of the IPC are not made out at this stage,” the judge added.