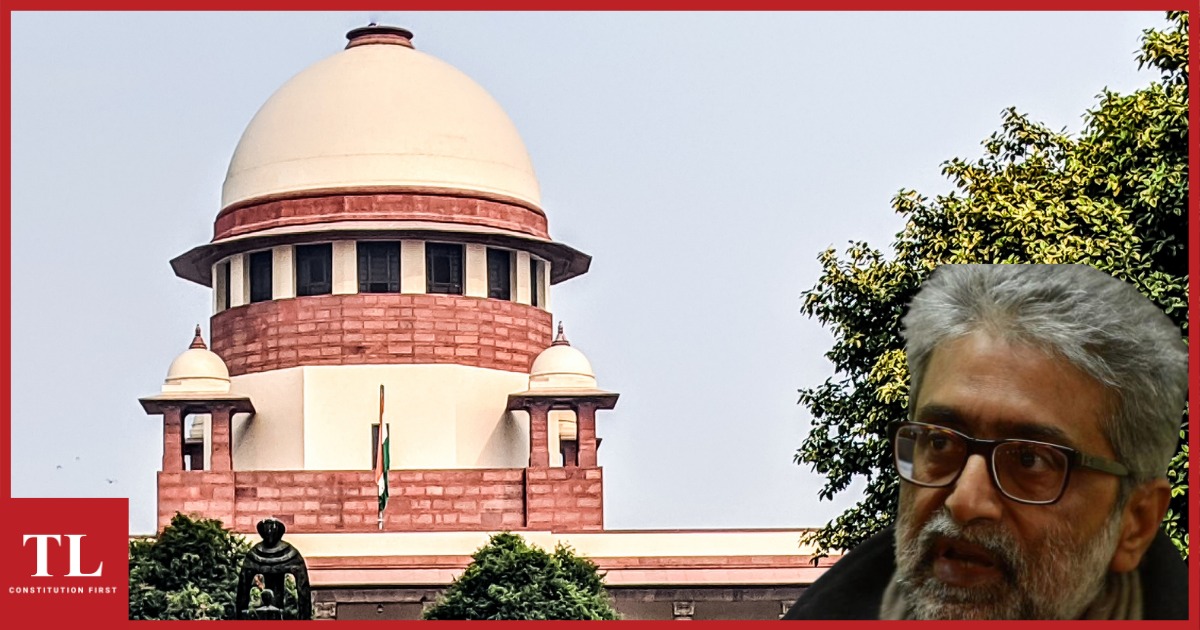 THE Supreme Court Wednesday refused default bail to Gautam Navlakha, an accused in the Elgar Parishad-Maoist links case, on the grounds that the 35 days he spent under house arrest in 2018 did not constitute custody in order to compute the 90 day period within which a charge-sheet must be filed under criminal law, to entitle him to to the same. Navlakha is facing charges under the anti-terrorism UAPA.

A bench of Justices UU Lalit and KM Joseph said Navlakha’s house arrest from 28.08.2018 to 01.10.2018 ordered by the Delhi High Court was not one passed under Section 167 of the CrPC and thus that period had to be excluded from computing the period of 90 days – the mandatory time period within which the charge-sheet is to be filed. The high court had not contemplated that the order of house arrest was passed by way of custody under Section 167.

It also relied upon the Supreme Court’s order on 29.08.2018 in Romila Thapar vs. Union of India, in which it had recorded the submissions of the senior advocate that he had no objection if the court ordered that Varavara Rao, Arun Ferreira and Vernon Gonsalves, the other accused in the case, if arrested, were kept under house arrest at their own homes. The same order also extended to Navalakha and Sudha Bharadwaj who were already under house arrest as per the high court’s order.

“House arrest was, undoubtedly, perceived as the softer alternative to actual incarceration. It was in that light that the court proceeded in the matter. That house arrest, in turn, involved, deprivation of liberty and will fall within the embrace of custody under Section 167 of the CrPC, was apparently not in the minds of both this court and the High Court of Delhi”, the top court held.

The court, however, clarified that in appropriate cases the court could order house arrest under Section 167 of the CrPC depending on criteria such as age, health condition and the antecedents of the accused, the nature of the crime, the need for other forms of custody and the ability to enforce the terms of the house arrest.

The Delhi High Court on 28.08.2018 had stayed Navlakha’s transit remand proceedings and directed that he be kept under house arrest under the guard of the Delhi Police Special Cell along with the local police that had come to arrest him. It had finally quashed Navlakha’s arrest on 01.10.2018.

Subsequently, in Romila Thapar vs. Union of India and ors on 29.08.2018, the Supreme Court extended Navlakha’s house arrest, which was further extended from time to time till the final disposal of the petition on 28.09.2018, when the Supreme Court pronounced its judgment and gave the accused liberty to pursue appropriate legal remedies.

Thereafter Navlakha pursued his legal remedy unsuccessfully and finally surrendered before the NIA on April 14, 2020.

In February this year, the Bombay High Court dismissed Navlakha’s appeal against the National Investigation Agency (NIA) Special Court rejecting his plea seeking statutory bail. It is against this order that Navlakha had approached the Supreme Court.

Senior advocate Kapil Sibal, for the petitioner, argued that when the appellant had claimed default bail under section 167(2) CrPC, his custody period, from the date of his arrest and first remand i.e. 28/08/2018 was more than 90 days. Sibal, thus, argued that Navlakha should have been enlarged on bail since no application for extension of time had been filed by the NIA (till much later on 29/06/2020 after 110 days) and the NIA court had, therefore, no authority to further remand the appellant.