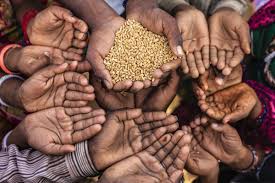 THE Central Government think tank, NITI Aayog, has suggested revising the coverage area under India’s National Food Security Act, 2013. Its revised recommendations, as discussed, suggest reducing the rural population coverage from 75 percent to 60 percent. For the urban population, the suggested cut is from 50 percent to 40 percent.

Currently, the Food Security Act covers 67 percent of the total population in the country.

The announcement comes amidst the food subsidy revised estimates going up to Rs 4,22,618 crore for 2020-21.

Under the National Food Security Act, the poorest sections of the country, the Antyodaya Anna Yojana households, are provided with a monthly supply of 35 kg of food grains. There are approximately 2.37 crore households that fall under this category. Additionally, 7.03 crore individuals from priority households are entitled to 5kg of foodgrain per person every month.

The above allocation was put in place by the Planning Commission which has since been replaced by the Niti Aayog. These distribution systems are based on the rural and urban coverage ratio determined during the National Sample Survey Households Consumption Expenditure coverage under food security in 2011-2012. However, the coverage ratio has not been updated since the law came into effect on July 5th, 2013.

The discussion papers submitted by the think tank estimates that if the rural-urban coverage ratio continues to remain the same, there would be an increase in the number of beneficiaries from 81.35 crores to 89.52 crores. However, if its recommendation of revising the coverage ratio to 60:40 is put into place, then the number of eligible individuals will come down to 71.62 crores.

To understand the coverage ratio, NITI Aayog has also recommended updating the current population levels in the country which is based on Census 2011.

The discussion papers were put forward after multiple meetings held under the chairmanship of NITI Aayog member Ramesh Chad. It was also attended by the Chief Economic Advisor, Food Secretary and the Secretary of Statistics and Programme Implementation Ministry.

After the revised coverage ratio was presented, the Department of Food and Public Distribution has asked NITI Aayog to come up with alternative means by which the Act can cover the beneficiaries that will be excluded due to the changed ratio.

However, according to reports from The Indian Express, the proposal is not formal yet as the department does not have the powers to change the law. In order for the changed ratio to come into effect, the Parliament will have to amend the law.

According to the United Nations, India shares a quarter of the global hunger burden and nearly 47 million children not meeting their full potential due to malnutrition. While the Indian government has taken various steps to eliminate hunger through schemes such as the Food Security Act,2013, the revised coverage ratio will have a huge impact on many rural and urban families.

The government must adopt a well-detailed plan to cautiously examine the suggestions of NITI Aayog taking into consideration the number of households that depend on food rations to survive. Their future cannot be compromised.

(Saikeerthi is a final year journalism student at Symbiosis Institute of Media and Communication, Pune, and an intern with The Leaflet.)