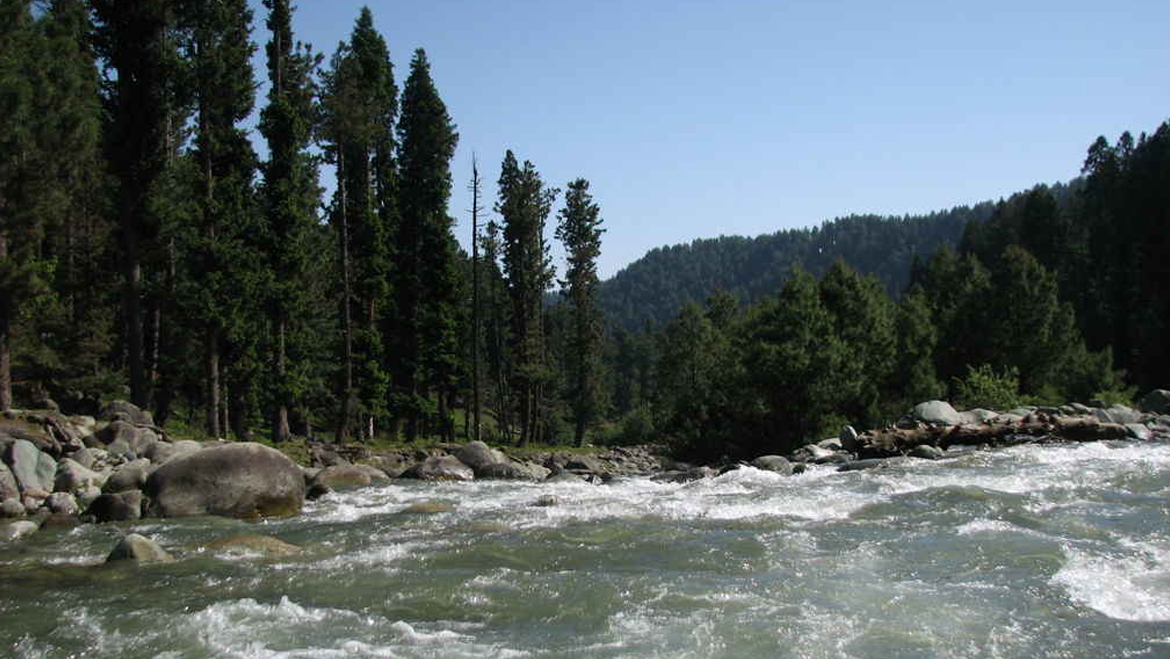 NGT comes to the rescue of Kashmir’s Doodh Ganga

DR RAJA MUZAFFAR BHAT writes about the extensive pollution of the Doodh Ganga river in Kashmir caused by government agencies over the last several years, and the government’s failure to even acknowledge, let alone address, the problem in spite of his efforts. Finally, he had to resort to approaching the National Green Tribunal, which, in a recent order, constituted a joint committee to inquire into the matter.

AS authorities failed to act over the continuous pollution of Doodh Ganga, a major tributary of Kashmir’s Jhelum River, the National Green Tribunal (NGT), while taking the issue seriously, has issued a direction for the constitution of a five-member joint committee for submission of a factual report before the tribunal.

“It appears that there is continued violation of the Water Act to the prejudice of the environment and public health which remains unchecked. Thus, intervention of the Tribunal may be called for. Accordingly, we direct the authorities to verify the facts and take remedial action in accordance with law. We also constitute a five-member Joint Committee of CPCB, J&K PCC, Deputy Commissioners, Srinagar and Budgam and the Director, Urban Local Bodies, J&K. The State PCB will be the nodal agency for compliance and coordination. The Joint Committee may meet within two weeks and undertake visits to the sites in question “

Why I moved the National Green Tribunal

I was prompted to file a petition before the NGT as administrative authorities in Jammu and Kashmir, particularly the Srinagar Municipal Corporation, the District Administration of Budgam and the Directorate of Urban Local Bodies, Kashmir did not act to protect the Doodh Ganga even as the matter was brought to their notice by me several times in the last five years.

I have written extensively on pollution in the Doodh Ganga, and in April this year I wrote a detailed piece for The Leaflet on the contamination of the Doodh Ganga by pesticides sprayed in apple orchards.

This summer, I, along with a group of activists, trekked to the glacier that is the Doodh Ganga’s source, which is located at an altitude of 4 km above sea level. Our objective was to generate awareness about keeping this river clean. I also made a video appealing to authorities to act.

In spite of the video going viral on social media, the administration did not respond.

When I found the government was completely unresponsive on this issue, I had no other option but to file a petition before the NGT in New Delhi. In addition to the Doodh Ganga, I sought the NGT’s intervention for the protection of Mamth Kull as well, which is another tributary of Jhelum and passes through the Budgam town in Kashmir.

The Municipal Committee of Budgam has been dumping all of its municipal solid waste (MSW) near the banks of Mamath Kull for more than 15 years now, which is a clear violation of the Water (Prevention and Control of Pollution) Act, 1974 (Water Act).

Also read: Why Are Kashmir Wetlands Drowning in Waste?

Doodh Ganga, which literally means a river of milk, originates from the glaciers of Pir Panjal mountains between the Budgam and Poonch districts. More than five lakh people get their drinking water supply from the small river, which used to be as pristine as its name suggests until a few decades ago. Since then, due to the massive urbanisation in the districts of Budgam and Srinagar, Doodh Ganga has been turned into a drain by the local people and the administration.

Its biggest polluter is the Srinagar Municipal Corporation (SMC), which has been pumping all its liquid waste, which includes hazardous waste and human excreta, into it without any treatment.

With support from the World Bank, SMC has been constructing around 50 Intermediary Pump Stations (IPS) in Srinagar city to prevent flooding in low lying areas. Four pump stations are being upgraded by the SMC’s city drainage division at the Natipora, Barzulla, Bul Bul Bagh and Magray Pora localities of uptown Srinagar. The work is going on at full pace. All the flood/storm water be pumped out into Doodh Ganga,

This is a blatant violation of the Water Act. Section 24(b) of this Act says that no person shall knowingly cause or permit to enter into any stream any other matter which may tend, either directly or in combination with similar matters, to impede the proper flow of the water of the stream in a manner leading or likely to lead to a substantial aggravation of pollution due to other causes or of its consequences.

The J&K State Pollution Control Board, now called Pollution Control Committee (PCC), has identified 13 drainage stations of SMC as the main sources of water pollution in Doodh Ganga. None of these drainage stations is provided with a sewage treatment plant (STP) to treat waste water or liquid waste draining out into Doodh Ganga. In fact, there is not even a single functional STP for any of the discharges into the Doodh Ganga.

Doodh Ganga’s polluted water also goes on to enter the Hokersar wetland, which is again a violation of the Wetlands (Conservation and Management) Rules, 2017.

Around 50 years back, a water filtration plant named the Doodh Ganga Water Filtration Plant was set up at the Kralpora locality in the outskirts of Srinagar. Raw water from the Doodh Ganga is lifted up on a hillock and processed through chlorine gasification.

The drinking water supplied by the filtration plant is not fit for drinking as huge quantities of liquid and solid waste that comes down to Kralpora from the Chadoora town and surrounding localities contaminate the water. Experts say that such contaminated water cannot be purified by chlorine gas, which is itself harmful for human health.

As per the inspection report of the PCC prepared in September this year, an analysis of samples collected from Doodh Ganga at different locations indicated that water in upstream spots, that is, at Sogam, Chadoora and Baghi-e-Mehtab, meet the prescribed permissible limit for ‘Class B’ (Outdoor Bathing Organised) criteria in terms of analysed physicochemical parameters.

On the other hand, in the lower course of river, that is, at the Baghat, Old Barzulla and Tengpora areas, the water quality didn’t even confirm to the ‘Class B’ criteria for the parameters of ‘Dissolved Oxygen’ and ‘Biochemical Oxygen Demand’. This is the demining indictment presented in the report:

“Comparatively inferior quality in the lower course of river can be attributed to addition of deleterious waste into the water body.

The … indicate that water quality in upstream and downstream meets the prescribed permissible limit for ‘Class B’ (Outdoor Bathing Organised) criteria in terms of analysed physicochemical parameters. However huge dumps of solid waste were observed along the banks of this stream. The municipal committee Budgam is dumping solid waste on the periphery of the Mamath stream.

Also read: This Summer, Instead of Pilgrims, Send Cleaners to Amarnath Yatra

Polluting agencies must be pulled up

It is a matter of grave concern that the Government of Jammu and Kashmir, in spite of receiving huge funds under the Jal Jeewan Mission, the Swachh Bharat Mission and other national flagship programmes, has failed to utilize them to clean drinking water sources or undertake solid and liquid waste management.

The SMC must be penalized for taking up construction works around Doodh Ganga in violation of environmental laws. It has spent hundreds of crores of rupees on the construction of water pump stations, but not set up a single STP around Doodh Ganga. The District Administration, Budgam should also be taken to task for dumping a huge quantity of solid and liquid waste in both Doodh Ganga and Mamath Kull for the last several years.

(Raja Muzaffar Bhat is a Srinagar-based activist, columnist, and independent researcher. He is an Acumen India fellow. The views are personal.)