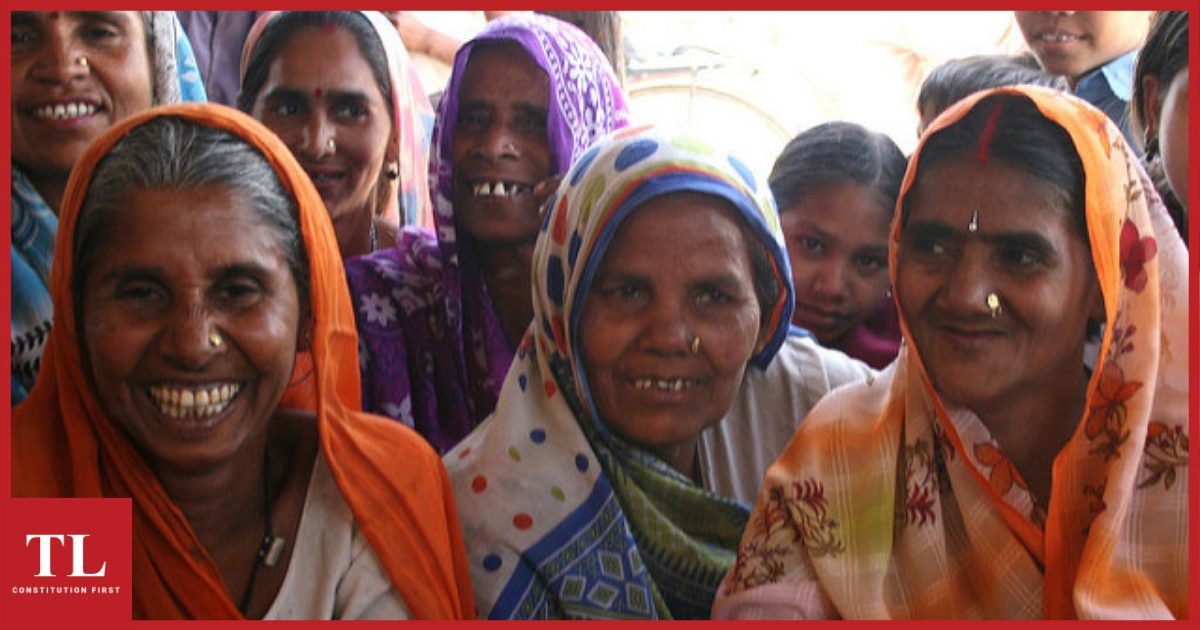 The poor can be enterprising and self-sufficient, provided policymakers give them economic citizenship. Author and lawyer ASHISH KHETAN reports how poor women in self-help groups in Jharkhand have solved their family’s penury by accessing the tools of development they so desperately need.

NEW-FOUND vocations and financial earnings have made women in Godda and Palamu in Jharkhand freer and confident. Almost all 1,500 members of Pholo Jhano Saksham Ajeevika Sakhi Mandal (PJSASM), a self-help group, and 125 women of Palamu’s Koel Apparel Park own smartphones. Each of them has a bank account and a debit card. Another 250 have bought two-wheelers which they use to travel to the centre and back home.

Lucy Devi too bought a TV and a Scooty. Almost 200 women members have built new houses with the money earned from sewing work. Before she joined the skill development programme, Anjula Devi was doing odd jobs to earn a few extra bucks to support her family. “For the last 20 years, I worked as a paid volunteer in government programmes like the pulse polio campaign, leprosy eradication drive and filariasis medicine distribution, and filled up forms for people applying for pensions, roaming from ward to ward. There’s nothing I didn’t do. But it was all temporary, a few months here, a few weeks there. The economic situation of my family was quite bad,” said Devi.

Then her husband contracted jaundice, which made her family’s financial condition precarious. “I had taken some training in rolling agarbattis (scented sticks) and sewing in the past. So when my sister-in-law read about the sewing training programme in the local newspaper, we decided to join the Siptiya Centre,” she said.

Devi, who lives in the village Mahavir Nagar, has recently purchased a 1,300-sq foot land for Rs 90,000 on which she has built a house at an expense of Rs. 8-9 lakh. “My new house has three rooms, a veranda, kitchen and latrine,” said Devi. To build her house, she got financial assistance of Rs. 2.25 from the Pradhan Mantri AwaasYojna. She is an example of how a combination of development schemes can lift the poor out of abject poverty.

Monica Tuddu, a 23-year-old tribal girl, educated till Class IX, is another beneficiary of the self-help group. Her family consists of an elder brother, a younger sister and her mother (her father died in a road accident in 2012). She joined one of the Sewing Skill Centres in 2019 and did a six-month sewing certification programme.  “I bought a smartphone with my first salary. But that got stolen. So I bought a second one for Rs 12,000. Then I bought a TVS Scooty for Rs 1 lakh in monthly instalments. My EMI is Rs 3,384. But I couldn’t pay it during the lockdown and got a default notice. But after the lockdown ended and the sewing centre reopened, I started earning again. I have paid my pending EMIs and now only eight are left,” said Tuddu with pride.

Besides making them financially independent, their newfound profession has earned these women respect at home and in society. “I feel so good when I am at the centre. Earlier, I used to be so tense sitting at home. My family used to torture me. They would call me nikhatoo (useless),” said Priyanka Devi from Mahavir Nagar, who works at one of the centres.

“These women don’t want even a day when they are idle or unemployed. The more clothes they sew, the more they earn. They get depressed and tense if they are confined at home,” chipped in the trainer at the centre, Pooja Kumari.

Vinita Devi of the Palamu Producer Group said the women were using their earnings to give their children a good education, buy essential household stuff or even construct a house.

Besides sewing, these women have also picked the basic skills required to manage a business of this nature. They do their own file management, book-keeping, order book and distribution file and even computer MIS. They interact with the district government officials directly without the help of any intermediaries, correspond with the administration on a regular basis and speak to suppliers and distributors.

Varsha Chaudhary from Motia village, Godda, who has studied till Class VIII does the book-keeping, besides stitching clothes. “In a month, I earn close to Rs 10,000 from stitching, provided there is work and another Rs 5,000 for doing book-keeping,” said Chaudhary.

“These women don’t want even a day when they are idle or unemployed. The more clothes they sew, the more they earn. They get depressed and tense if they are confined at home,” chipped in the trainer at the centre, Pooja Kumari.

These women have also broken many taboos. The village’s upper-caste women were supposed to stay at home. Going out and working was seen as the lot of women from the lower castes. “I am a Brahmin. When I started working, women from my community would gossip that because my family didn’t have enough to eat, that’s why a Brahmin woman was going out to stitch clothes. Now seeing the improvement in my financial situation, they too want to work. I have changed their old way of thinking,” said Chaudhary.

She still lives under a thatched roof. She has used her earnings to pay for her daughter’s private tuitions in science. “Earlier, my neighbours used to mock me when I wanted my daughter to study science. They believed and rightly so that we would not be able to afford the cost of schooling our children. Now I can fund not only my daughter’s studies, but pay for my mother-in-law’s medicines. My daughter is now in the first year of BSc,” said Chaudhary with pride as her daughter Sangam Priya, 17, sits beside her. Priya secured 85 percent marks in the 10th exams and above 75% in Class XII.

Women Skill Development Programmes of Godda and Palamu provide compelling evidence of how a small but effective intervention can act as a development ladder for people stuck in poverty and transform a whole region socially and economically.

Every woman one speaks to over here will talk of seeking dignity and opportunity. Poor as they are, they do not demand charity, handouts or freebies. They want their own economic citizenship. They want the means to solve their own problems.

Priyanka Sharma, is one of them, and now sends her children to a private English medium school. With her savings, she is also considering building a new house.

Women Skill Development Programmes of Godda and Palamu provide compelling evidence of how a small but effective intervention can act as a development ladder for people stuck in poverty and transform a whole region socially and economically.

Sangam Jha has financed her daughter’s education (she is in the final year of her MA course) and her son’s college education (graduated in the science stream).

Anjula Devi has financed her daughter’s education (completed BSc from Mahila College Godda and is now training to be a teacher).

Devi is now the main earning member of the family, while her husband supplements the family income by giving private maths tuition. “I am happy now; I make Rs. 300-400 per day, but it will be nice if I can get more work,” she said.

The general challenge of poverty if narrowed down to a set of concrete problems associated with identifiable victims can be solved, one at a time. This is the crux of the work done by Nobel laureates and economists Abhijit Banerjee and Esther Duflo.

They have been emphasising that change is possible if solutions can be devised to region-specific problems. The programmes to skill women in Godda and Palamu support this premise.

Chaudhary said that many women were earlier subjected to a lot of domestic violence and abuse at the hands of drunken spouses. “Now they just tell their husbands to go and drink while they come to the sewing centres and work,” she said. Lucy Devi said: “Not one woman wants to sit even for a day at home. There is a mad scramble for work.”

The general challenge of poverty if narrowed down to a set of concrete problems associated with identifiable victims can be solved, one at a time. This is the crux of the work done by Nobel laureates and economists Abhijit Banerjee and Esther Duflo.

Since 2020, the PJSASM has been organising a cultural event on March 8 on the occasion of International Women’s Day. “The idea behind organising this event was to showcase to other women what it does for your self-confidence once you start earning. We want other women to come out of their shells and see the world with their own eyes,” said Lucy Devi, the PJSASM president.

On the eve of international women’s day on March 8, 2021, news came in that PJSASM had bagged another contract of stitching school uniforms from Simdega district administration. These women are now ebullient. More work means more money. Moreover, they love their work. It gives them fulfilment and happiness.

The women of Godda and Palamu are taking small but concrete steps towards development. Their assured monthly earning has made them secure and confident and hopeful of a better future. Their story shows that people no matter how poor they are, can solve their problems and improve their station in life as long as they can access the tools of development they desperately need.

(Ashish Khetan is an author, lawyer, and columnist. His book, Undercover, has recently been released. The views expressed are personal.)