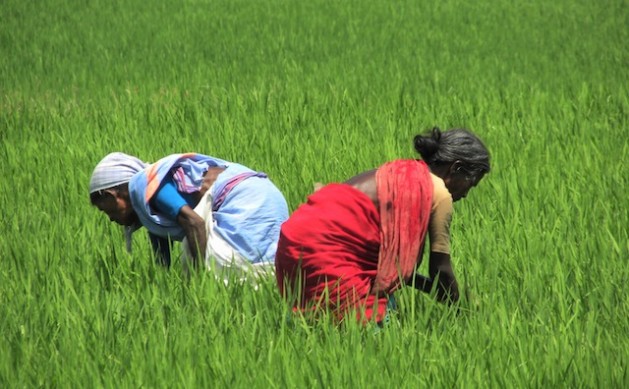 The new Farm Bills have been met with stiff opposition from farmers over concerns of loss of income. While the government maintains its stand that it will usher in more prosperity, the question is prosperity for whom? ARINDAM BANERJEE writes on how the farming sector is a booming business opportunity that will attract big businesses and is a cause of concern for the farmers.

THE three farm ordinances promulgated by the NDA Government at the centre in June has now been hurried through an abridged Parliamentary session. Given the significance of these Acts for Indian agriculture and the future of the country, the required consultative process is conspicuous by its absence.

Notwithstanding the government’s claim that these laws will provide better price opportunities for farmers and the repeated assurances that the government is committed to public procurement and Minimum Support Prices, strong and noisy protests have been organized by farmer organizations, primarily in North India to begin with, while farmer groups from other regions are joining the resistance.

Weighing the government’s contentions and the concerns of the farmers in the context of these new farm laws will be a useful exercise to comprehend the emerging situation.

The Farmers’ Produce Trade and Commerce (Promotion and Facilitation) Act, 2020 attempts to create the space for private traders outside the APMC (Agricultural Produce Marketing Committee Act) regulated mandis. The government argues that this  is necessary for improving the price offers that farmers get for their crops.

The second law, The Farmers (Empowerment and Protection) Agreement on Price Assurance and Farm Services Act, 2020, seeks to promote contract farming, thereby attempting to place the Indian farmer in the global corporate food chains, again with the promise that the farmers’ incomes would rise as a result.

Big India corporates like Reliance (with new money infusion from North Atlantic based companies, including Facebook) and the Adani Group are also eyeing lucrative business prospects in food processing and retailing

Apart from these two laws, the Essential Commodities (Amendment) Act, 2020 removes several crops, including cereals, from the list of essential commodities, effectively doing away with hoarding restrictions on these crops by private entities. This is in sync with the idea of the other two Acts to facilitate private players to invest and increase their presence in the farm sector.

To understand why the farmer is not convinced by these laws and their lofty goals of boosting farm incomes, one needs to closely look at the contemporary situation of Indian agriculture.

So, introducing a greater play of private capital may make sense for the food-grains markets, though a blanket argument that private trade necessarily leads to better prices does not hold.

Crop prices are determined by the conditions of market demand and supply. Globally, and in India, crop prices have stagnated or declined after the earlier agricultural boom associated with the Global Food Crisis that came to an end in 2012. While there were significant exports by Indian cereal farmers till around 2013-14, that market dried up since.

Will These Laws Change Anything?

As per the Primary Commodity Price System Data of the IMF, the prices of crops like Rice, Wheat, Maize and Jowar declined in the range of 31 to 43 per cent between 2012 and 2019. And these prices continue to remain low amidst the COVID-19 pandemic. So what can these laws change?

The impact that these laws can make in the Indian food-grain markets is through the entry of big, corporate capital. This is what the government is not stating with clarity but hinting at through terms like ‘new-age farmers’ who are expected to use advanced technology for farming and supply to global corporate food processing industries receiving higher prices. This will ostentatiously occur as part of the corporate food networks, where Transnational Agribusiness Corporations will bring in grander investments than what has happened in the Indian grain production and markets till date.

There are at least two reasons why there is rising pressure from the big corporate lobbies on the government to facilitate this.

First, globally the pandemic has made a serious disruption for capital and profits, especially in many traditional areas of business and profits. The massive loss of jobs and income has led to a cut-back in consumption of various goods and services.

With the pandemic still in an uncertain trajectory, and impending out-of-pocket health expenditures, many of these consumption cut-backs are unlikely to be reversed soon. Amidst this, agricultural commodities have done relatively well given that many of these are necessary items of consumption.

Further, the pandemic has been associated with a digital boom of food retailing which has opened up new business opportunities. Therefore, corporate capital is looking to recover some of its lost profits by shifting capital into the farm sector on a much larger scale than before.

Big India corporates like Reliance (with new money infusion from North Atlantic based companies, including Facebook) and the Adani Group are also eyeing lucrative business prospects in food processing and retailing in this new situation.

In 2015, the Shanta Kumar committee report on FCI restructuring proposed to ….replace the Public Distribution System (PDS) with cash transfers, citing such large exports and stocks, and did not mention hunger even once!

Secondly, the Indian grain markets themselves present an enormous business opportunity. This attracted attention when there was an unprecedented export of cereals to the order of 77 million tonnes in the five years, 2009-13.

To put things into perspective, this is the annual grain consumption of entire southern Europe, a developed region where per capita grains consumptions are among the highest in the world. This, along with the current FCI grain stocks of over 90 million tonnes indicate a large market where profits can be made.

It is another matter that both exports of food-grains and high food stocks continue to exist with pervasive hunger and nutritional deficiencies in the country. In reality, it is the declining per capita grain consumption since early 1990s, intensifying income poverty and persisting hunger in the country that allows domestically produced grains to be either exported or get accumulated in the FCI godowns.

In 2015, the Shanta Kumar committee report on FCI restructuring proposed to practically wind up the FCI (with the last chapter even detailing out the VRS schemes for the employees) and replace the Public Distribution System (PDS) with cash transfers, citing such large exports and stocks, and did not mention hunger even once!

While, even a popular government like the current NDA regime do not have the political capital to directly replace the PDS with cash transfer, these hurriedly enacted Farm Laws do reflect the intention of the Government to withdraw from grain management operations.

They are counting on the expectations that big corporates by entering the grain markets will offer better prices to the farmers and wean them away gradually from the public procurement agencies.

This signalling by the government is clearly triggering the unrest among farmers. They are aware that global corporate food supply chains are usually monopolies and duopolies and the initial price incentive that may be offered are expected to dry up once the market capture is accomplished.

They are looking at the prospect of moving from the ‘known inefficiencies’ of the mandi system (something they have learnt to adjust over the years) to the clutches of ‘big global capital’ whose accountability lies nowhere. There is a veritable apprehension among food-growers that the two-decade long agrarian distress, which they have managed to more or less avoid till now, maybe finally catching up with them. It is no surprise that what has remained unsaid in the new laws clearly concerns them.

There is a veritable apprehension among food-growers that the two-decade long agrarian distress, which they have managed to more or less avoid till now, may be finally catching up with them.

The undermining of the grain procurement system will also hurt the large section of the population who are nutritionally insecure.

The proportion of such population is much larger than our poverty estimates based on erroneous poverty lines. This has not been updated as the government has not released the NSS Consumption Expenditure Survey data for 2016 which assure around 1800 calories per day or less on the average, much lower than any decent nutritional norm. The calorie requirement of an adult male engaging in hard physical labour is between 3,300 and 3,600 calories day. While all sections of the population may not engage in such manual labour, the average intake of 1,800 is significantly lower than what is required for the Indian population.

Also, with regard to food security, any undermining of public procurement and the PDS also strikes at the heart of the social-federal contract that binds this diverse country. Rich states like Kerala or Maharashtra are grain-deficit states given their diversity of agricultural production.

Food Security May Become a Challenge

If the Union government abdicates the responsibility of centralised grain management in the country and leaves it eventually to private players, maintaining the food security in diverse regions will face a serious challenge.

Poor regions will be at the receiving end but even some richer states will face new challenges. For example, Kerala earns valuable foreign exchange for the country by exporting various agricultural products based on its rich bio-diversity and this is possible due to the cross-country transportation of food-grains that supply the PDS in the state.

If the responsibility of grain procurement is passed on to sub-national governments, states with surplus-grain cannot be held accountable for ensuring that the PDS in grain-deficit states run smoothly. This does not augur well for federalism and the larger political fabric of the country.