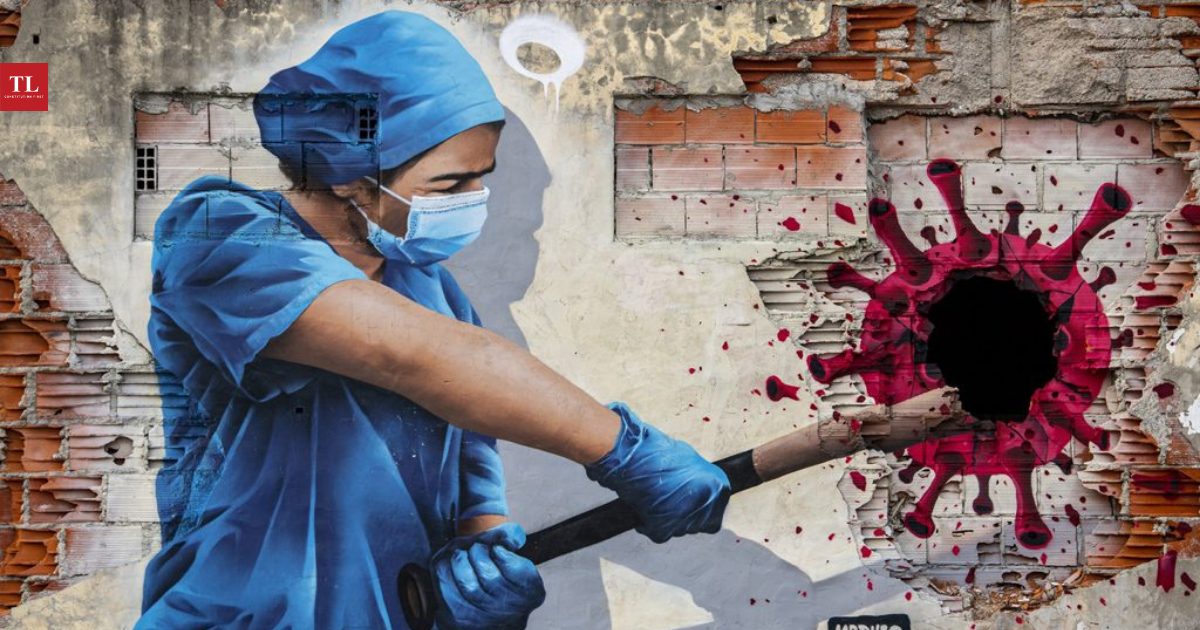 Nobel laureate and Holocaust survivor Elie Wiesel said, ‘Neutrality helps the oppressor, never the victim. Silence encourages the tormentor, never the tormented.’ In this light, a Covid-19 survivor, TANYA AGGARWAL, writes about never forgetting the worst systemic failures and dereliction of duty by a state in recent history. Tanya battled COVID-19 on oxygen support in a hospital. Her husband was hospitalised too and fortunately recovered. Her child was fortunate but many Indian children were not.

We lived, as usual, by ignoring. Ignoring isn’t the same as ignorance, you have to work at it.

Nothing changes instantly: in a gradually heating bathtub you’d be boiled to death before you knew it.’ —Margaret Atwood, The Handmaid’s Tale.

ATWOOD writes of the totalitarian regime of Gilead, which outlaws all religions other than its own, suspends the US Constitution and eliminates rights, including the freedom of speech, press and assembly. A hierarchy of social classes based on personal characteristics such as gender is created instead.

Stadiums are repurposed as prisons and execution grounds. A hallowed educational institution is transformed into a den of oppressors, with executed “criminals” displayed on its walls. Women are at the mercy of male masters and have no right to love, read, write or own property.

Sounds extreme? It is.

Atwood conceived The Handmaid’s Tale as speculative fiction and it is usually classified as a dystopian work. However, given the last few years in India, it could be considered self-help. Particularly after the second wave of the Novel Coronavirus pandemic, we may discover one day that we no longer have the right to vote or leave the country. This is more of a possibility now than a risk. We are in a gradually heating bathtub.

The Prime Minister was recently credited with leading a victory over the second wave. He organised yet another monologue to take control of the floundering vaccination programme of his regime. Do not be fooled by saviour-like appearances. The monologue came as the second wave was already in its ebb, as vaccine supplies are expected to ease, and a third wave is some time away because many of us have had natural infections and therefore developed antibodies against the virus.

When the going got tough after a dismal display of federal power, the leadership re-discovered the Constitution—the same document they side-stepped innumerable times to further their agenda—to assert that healthcare is a State subject.

Vaccine manufacturers did not give states the time of day. The leadership went into hiding for most of the second wave, emerging only to censor social media, deliver intermittent monologues, and cry.

How did we reach the breaking point?

Early last summer, members of the Tablighi Jamaat were declared a massive threat after they gathered by the thousands in India, even though the Indian government had not declared Covid-19 a threat and the virus and its effects were still unknown.

After the first wave brought India and the rest of the world to its knees, the leadership gave the go-ahead to the Kumbh Mela with more than nine million attendees and fired the one man who tried to stop it.

The party ruling at the Centre campaigned relentlessly in several Assembly contests—because politics comes first. They had long been applying the “hard work is better than Harvard” ethic to ensure the right people got into the right place.

Also read: Ram Lalla and other idols in Ayodhya get heater and blanket

The Supreme Court gave Ram Lalla possession of his ostensible birthplace. People who voted to see a temple materialise believed Ram Lalla would protect them. They believed everything, including that the pandemic had been contained by January 2021.

Some of us did not fall for this spiel, but others stopped wearing masks and complying with social distancing. Their leaders did not follow these norms, so why should they? We know what happened next—overflowing crematoria were proof enough.

“But who can remember the pain, once it’s over? All that remains of it is a shadow, not in the mind even, in the flesh. Pain marks you, but too deep to see. Out of sight, out of mind.”—M Atwood, The Handmaid’s Tale.

Do not forget the first or second waves. In the first, we got a national lockdown in four hours’ notice and we were given at least two days’ notice before we were to bang utensils and light candles. There was an acute preference for instant gratification associated with front-page coverage of gimmicks as opposed to slow results of real hard work. We saw migrants walk hundreds of kilometres and we got in return a black box ironically named PM-CARES.

We saw the promotion of gau mutra (cow urine) over allopathy and we witnessed a failure to reprimand a rich self-styled baba for his malicious attacks on healthcare workers who kept us alive. Remember that the Covid-positive Home Minister checked into an elite private hospital run by a world-famous doctor, but countless Indians were left to choke to death outside hospitals.

Do not forget that the rulers of the day prematurely declared victory over the pandemic, dismantled Covid-19 facilities and diverted money from public healthcare and children’s education to rebuild the Central Vista. We are suffering from short supplies of oxygen, hospital beds and medicines although they had a year to do some preparatory ‘hard work’.

Do not forget their complete failure on vaccine procurement and distribution, the inexplicable extensions of time-gaps for vaccines, the misleading presentation of vaccine coverage data, the exclusion of masses through CoWIN and the PM’s photo on vaccination certificates—but not death certificates.

Do not forget the censorship of social media, the targeting of whistle-blowers and those arrested for putting up posters. Remember—there is almost no economic plan for the vulnerable and complete absence of ownership and leadership over the crisis. Do not forget the comprehensive annihilation of the right to health, and ultimately, the right to life.

Do not forget that we have a new enemy even before Covid-19 has retreated—black fungus or mucormycosis. I am at risk, as are countless others. Many have succumbed. There is no medicine except one that is highly toxic and in short supply. The leadership asks states to declare black fungus an epidemic because healthcare is a state subject.

The solution that could prevent the problem will require the leadership to initiate and encourage nationwide efforts to regulate the indiscriminate use of steroids, ensure clean oxygen supply and eliminate organic waste, including cow dung, that line our streets.

Some argue we cannot blame one man or one party alone. Past governments indeed failed to spend on public healthcare. But is it forgivable that the present regime, even during a crisis, failed to ramp up public health infrastructure? Yes, India’s pandemic crisis represents the systemic failure to administer, anticipate, plan, prevent and cure.

For example, one state government was busy setting up helpdesks for cows as the second wave was raging, another failed to set up oxygen plants, and many Indians roamed unmasked in denial or defiance of Covid-19 protocols. Even if I name every such person, they could simply plead obedience to superior orders—also known as the Nuremberg defence.

“When we think of the past it’s the beautiful things we pick out. We want to believe it was all like that.”—M Atwood, The Handmaid’s Tale.

Do not forget all that happened or began before the pandemic. The first and last press conference by the PM—recall what happened on that much-anticipated day in May 2019—he retained “his record of being the only incumbent to never answer questions from reporters..”.

How is the conduct of the leadership acceptable in what we proudly call the world’s largest democracy? Even the one-term wonder Donald J Trump held multiple press conferences. The credibility of his answers apart, at least he dared to be questioned and have his performance broadcast live to the world.

Do not forget charging all and sundry with sedition, frequent internet shutdowns, callous handling of rape cases, “love jihad” laws, muzzling of the media, meek objections to lynching by vigilante cow protection mobs, erosion of transparency in campaign finance, the discriminatory amendments to the Citizenship Act, National Register of Citizens, anti-Muslim violence in the capital.

Do not forget the systematic takeover of constitutional institutions such as the Election Commission, the futility of demonetisation where more than 99% of the junked notes were returned, the compromise of the judiciary and the downfall of the Supreme Court from a rights court to an executive court, the stadium named after the PM inspired by the best of the best (Saddam Hussein and Kim II Sung, to name a few), the two pavilions in the said stadium named after industrialists whose wealth has rapidly increased.

That stadium is a perfect analogy for the current state of India. It is a bull-fighting arena with a billion people packed inside, tighter than sardines, barely able to breathe. They take turns setting the bulls on us.

To fight the immediate enemy—Covid-19—all of us need to wear masks and follow all safety protocols recommended by scientists. Irrespective of vaccine status and irrespective of whether the leadership complies.

Offred, the protagonist of The Handmaid’s Tale, reflects on how she did not join the protest marches after she got fired from her job, choosing to focus on her family instead. It seemed futile and they felt powerless. She realises her family was destroyed anyway because not enough people fought back.

“A rat in a maze is free to go anywhere, as long as it stays inside the maze.”

Let us not make the same mistake. Let us not allow “freedom to” get replaced by “freedom from”. Let us build a solution and protect our right to vote to get out of this maze in 2024. Make the incumbents beg for votes like they made us beg for oxygen, hospital beds, and life-saving medicines. We owe it to the lakhs who died to make sure they do not get those votes.

Atwood’s Gilead is a theocracy following extremist Christianity. North Korea follows Songun (military-first). If we fail to find a solution, India will follow Hindutva (Hindutva first) and those of us who remain in the bathtub will boil to death while the incumbents live in luxury at the Central Vista.

Dear Leadership—if the people of India win, then I offer you the advice your lawyer gave in open court to a person who complained of your failure to comply with oxygen allocation guidelines.

(Tanya Aggarwal battled COVID-19 on oxygen support in a hospital. She is a Delhi-based lawyer. The views expressed are personal.)