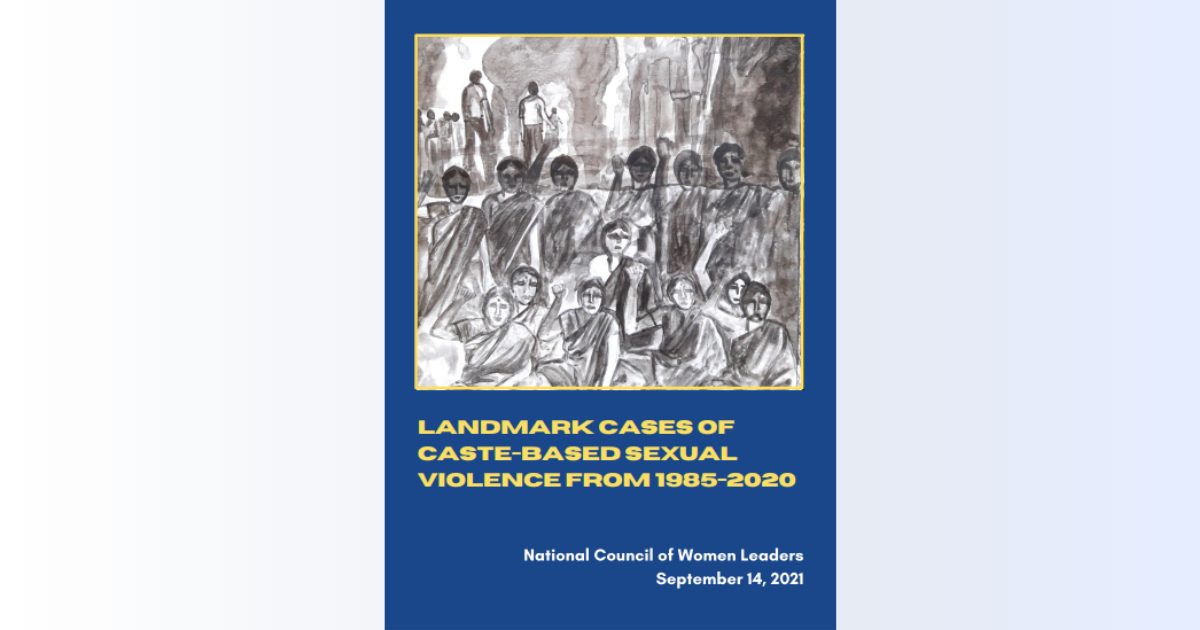 SHREYASI SINGH lays out the findings of the report titled “Landmark cases of caste-based sexual violence from 1985-2021″ released by the National Council of Women Leaders earlier this month, detailing the common themes of invisibilisation of case by the judiciary, executive inaction and upper caste brutality against Dalit women that still persists across India.

TO commemorate the first anniversary of the Hathras gang rape case, which led to the death of young Dalit women in September 2020, the National Council of Women Leaders (NCWL) earlier this month released a report titled “Landmark cases of caste-based sexual violence from 1985-2021.” The report documents twelve cases of sexual violence against Dalit women and girls over a period of 35 years across 10 states.

It poses the question, “If justice was unachievable even in cases which drew national public, media, and political attention and widespread protests, what does this mean for the Dalit women and girls who are raped every day across the country and who receive minimal attention or support?”

Also read: The Politics Behind Rising Atrocities Against Dalits

Of the 12 cases in the report, three were massacres that were committed against the Dalit community at large by upper castes groups in the states of Andhra Pradesh, Gujarat, and Maharashtra, respectively. In each of these cases, the caste-based sexual violence charges were either not taken into consideration or disseminated arbitrarily, citing lack of evidence.

The very first case mentioned in the report dates back to 1985; the Karamchedu Massacre in Andhra. Here, an armed group of upper caste men attacked an unarmed Dalit colony, with at least three Dalit women raped and three Dalit men killed.

The report mentions that the massacre was misleadingly labelled as a riot, and elements of caste-based discrimination and operation were dropped out of the issue. Initially, the High Court acquitted all the accused in 1998. Finally, in 2008, 20 years after the massacre, the Supreme Court convicted 29 persons of “rioting, armed with a deadly weapon”, and one person of murder. However, nobody was convicted of rape.

The report next mentions the Pankhan Atrocities of 1999, where the upper caste Rajput community of Gujarat carried out a brutal attack against 100 Dalits, wounding 40 people. One Dalit woman was gang-raped by 13 men and brutally assaulted, but “despite the brutal nature of the atrocity, State authorities were slow to react.” The report notes that while about 140 witnesses were heard, the case is still pending at a lower court in Keshod.

In the atrocity aimed at Dalits in Khairlanji, Maharashtra in 2006, a mob of dominant-caste attacked a Dalit woman and her 3 children because of the Dalit woman’s assertiveness of her right to her agricultural land, which had been encroached by dominant caste members.

The report mentions how the “dominant castes dragged her, her daughter, and two sons out of their home, paraded them naked, raped the woman and her daughter, and lynched all of them in public” but the media took more than a week to report this. Eventually, “a rape charge was never brought by the government claiming lack of evidence”.

A special court tried the case and held 8 persons guilty of murder in 2008; however, it noted that the murder was based on revenge and not motivated by caste. The lone survivor of the attack was provided the job of a peon as “compensation”.

This case, the report notes, is an apt example of “the institutional failure to recognize the rape of the victims, the invisibilisation of caste by courts and government authorities raises the question of whether justice was in fact achieved”

Also read: Why Ensuring Dalit Human Rights is Still a Tough Task in the 21st Century

The case of Bhanwari Devi from Rajasthan in 1991, as the report mentions, is typical of the influence of caste bias on the justice administration system and using sexual violence for silencing voices of women advocates. While public interest litigation filed before the Supreme Court in the aftermath of this atrocity led to the formulation of Vishakha Guidelines against sexual harassment at the workplace, there was no similar law put in place for the unorganized sector where Dalit women are largely employed.

A Jaipur court acquitted the accused, remarking that “an upper-caste man could not have defiled himself by raping a lower-caste woman”. and so she was lying. Thus, despite being an advocate for rape survivors, Bhanwari Devi was denied justice.

In 2002, the daughter of Dalit artist and activist Bant Singh, a ninth standard student, was gang raped in Mansa, Punjab. In spite of threats from the perpetrators and the village panchayat, Bant Singh pursued justice before the judiciary, and secured life sentences for the perpetrators in 2004. In retaliation, he was brutally beaten up by the upper caste men, which left him without an arm and both legs.

The report highlights that both father and daughter have, over the years, become symbols of Dalit resistance.

Next, the report mentions the Patan gang-rape from Odisha, where a 17-year-old Dalit girl was gang-raped 14 times by six professors of the Primary Teacher’s Certificate college in Patan in 2008. When the victim tried pursuing justice in courts, she was pressurized to accept an out-of-court settlement, and forced to move out of her home.

In March 2009, a special fast track court convicted all the accused and sentenced them to life imprisonment, but didn’t punish them under the SC-ST (Prevention of Atrocities) Act. On appeal, the Gujarat High Court upheld the convictions, but reduced the sentence of one of the convicts to ten years.

The Pipli gang rape of 2011 is another shameful case from Odisha which, as per the report, reflects the complete dereliction of duty by numerous state officials. A 19-year Dalit girl was raped and assaulted by two men in order to silence her, since she was a witness in a different molestation case. She passed away due to her injuries in 2012

The police filed an FIR after more than a month, after being directed to do so by the state’s Human Rights Commission. The accused were ultimately acquitted due to lack of evidence and appeal to which is still pending before the Orissa High Court.

The Bhagana gang-rape of 2014 in Haryana, where four minor Dalit girls were abducted and raped by upper-caste Jat men was also a form of retaliation to Dalit resistance and claim right over communal lands. In August 2015, a fast-track court acquitted the accused for lack of evidence, an appeal to which is pending before the Punjab and Haryana High Court.

As the report notes, many Dalit families have shifted to neighbouring villages due to their isolation and boycott, and thus evidently, their resistance against injustice came at the cost of the quality of their lives.

In the Delta Meghwal case of 2016, a 17-year old Dalit girl was raped by the upper caste PT instructor at the institute where she was studying. The Institute, according to the report, “engaged in victim-blaming, made her sign an “apology” jointly with her rapist, saying that the sex was by mutual consent”.  The case is still pending before a special court.

After Delta’s death, her father, as well as other Dalit families in her village, have not allowed their daughters to go out of the village to study.

In the Jisha rape and murder case of 2016 in Kerala, a young Dalit student was raped and killed after being harassed for more than a year by the accused. She had complained to the police about the harassment, but no action was taken.

An online campaign led to the conviction of the accused in 2019; however, no action was taken against the failure of investigating officers for their inaction.

Next is mentioned the Nandini gang rape and murder case from Tamil Nadu in 2016. As the report mentions, an upper caste man pursued a relationship with a minor Dalit girl, but when she became pregnant, he “refused to marry her due to her caste” and pressured her to have an abortion. On her refusal, she was gang-raped and murdered by him and three other men.

Notably, here the accused himself accepted and confessed to the rape and murder later. However, even after the instructions from the Madras High court, the trial court has yet to issue a verdict.

The report finally mentions the Hathras gang rape and murder case of last year, which had been initially passed off as an honour killing case. Eventually, the CBI confirmed that the 19-year-old Dalit victim was raped and murdered by four upper-caste men.

As of now, a criminal trial is ongoing at a special court in Hathras, while the Allahabad High Court is looking into her forced cremation and the role of state officials in botching the investigation. The victim’s family and lawyer have received numerous threats to their safety, including death threats, but the Allahabad High Court is adamant to transfer the case out of Hathras. They continue living under maximum security.

Also read: Hathras Rape: How it Exposes All of Us

Key takeaways from the report

All the cases mentioned above depict the invisibilisation of caste despite there having a clear element of caste discrimination. The cases show how rape is often being used as a weapon by the upper dominant caste to silence Dalit women as a form of retaliation for asserting their rights.

Importantly, in none of the cases mentioned above, a decision was taken within a year. Only in three out of the twelve mentioned cases, there was a conviction of the accused. Even here, the conviction in two out of these three was for murder, and the court chose not to apply the SC/ST Atrocities Act.

The failure of state authorities to register cases or act on time is also a common thread that runs through all cases, which span the length and breadth of the country.