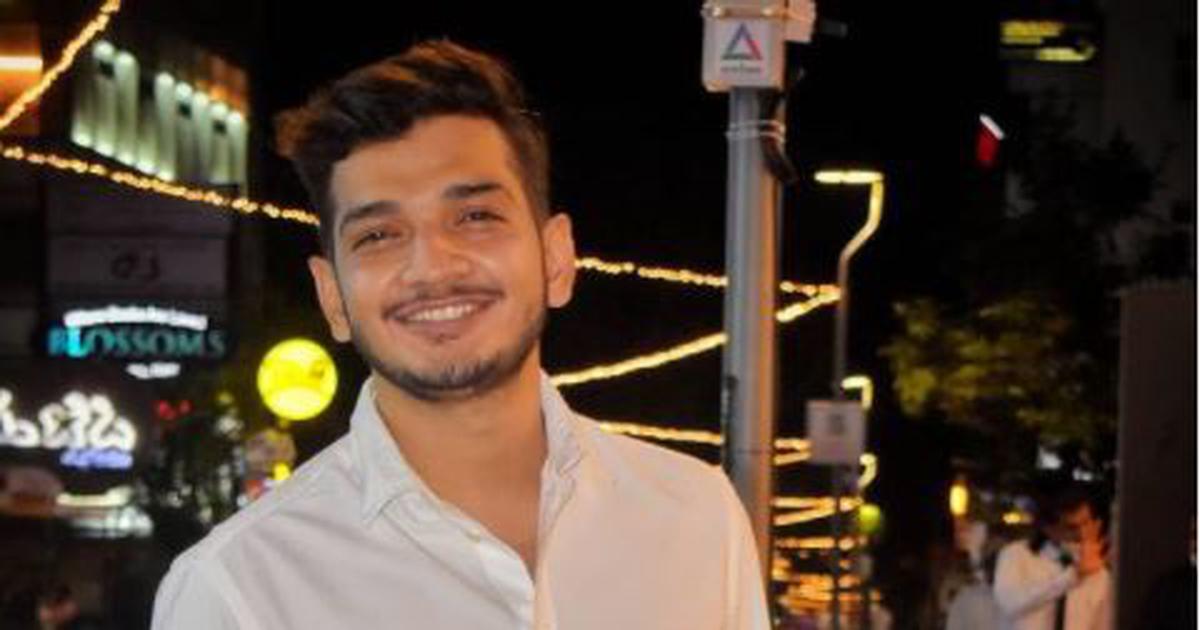 The new year began on a bitter note for stand-up artist Munawar Faruqui, who was arrested in Indore only on the insistence of a well-connected right-wing youth. The judiciary has said Faruqui offended Hindu sentiments and denied him bail despite evidence to the contrary. Judges have also acted differently when non-Hindus have claimed hurt feelings. Such selective application of law raises deep concerns about our justice systems and dilutes the cherished norms of democracy, writes MONICA DHANRAJ.

On the evening of 1 January, stand-up comic Munawar Faruqui was due to perform a routine before an audience of about 100 people at Indore’s Cafe Monroe. However, as soon as he got on-stage, he was interrupted by Eklavya Gaur, local Bharatiya Janata Party legislator Malini Gaur’s son. Gaur asked that the show be cancelled because Faruqui had made jokes about Hindu deities in the past.

In a widely-circulated video of the incident, Faruqui can be seen trying to reason with Gaur, telling him he has uploaded a video on YouTube apologising for a previous video, to which there had been a backlash on social media. In the January 2021 video, Faruqui is seen answering Gaur’s questions politely and asking members of the audience to calm down when they were responding to some of Gaur’s allegations.

Gaur leaves soon after, and the situation seems to have been diffused. Faruqui starts his routine. However, minutes later, a mob gathers outside the venue and the organisers were forced to cancel the show because the venue’s owner suddenly backed out.

Faruqui had not uttered a word against any Hindu gods or deities on that day. The police arrived soon after and arrested him and four other comics and organisers.

The police filed a First Information Report (FIR) on Gaur’s complaint against all five under sections 295-A (deliberate and malicious acts intended to outrage religious feelings), 298 (deliberate intent to wound the religious feelings), 269 (negligent act likely to spread disease), 188 (disobedience to order duly promulgated by public servant) and 34 (common intention) of the Indian Penal Code.

Gaur, who is also the convenor of the right-wing group Hind Rakshak Sangathan, said in his interaction with the press that he filed the complaint because Faruqui insulted “Hindu deities and also mocked Home Minister Amit Shah by dragging his name with Godhra riots”.

Faruqui and the other accused were produced before the Chief Judicial Magistrate on 2 January, who denied their request for bail stating his release will disrupt law and order. On 5 January, Additional District and Sessions Judge Yatindra Kumar Guru rejected their bail application again.

On the same day, the police arrested Faruqui’s acquaintance, Sadaqat Khan, on the court premises. He has been charged with passing abusive remarks at Gaur during the 1 January incident. On 13 January, the sessions court rejected Khan’s bail plea, citing similar grounds.

On 15 June 2020, news anchor and managing editor of News18 India Amish Devgan hosted the debate show titled Aar-Paar in which he described Moinuddin Chishti, a 13th-century Sufi saint, as “aakrantak” and “lootera” (terrorist and looter) and insinuated that he had intimidated and coerced Hindus to embrace Islam.

After this nighttime debate was telecast across the country, seven FIRs were registered against Devgan in Rajasthan, Telangana, Maharashtra and Madhya Pradesh under sections 153B (imputations, assertions prejudicial to national integration), 295A and 298, 153A (promoting enmity between different groups on grounds of religion, doing acts prejudicial to maintenance of harmony) and 505(2) (statements creating or promoting enmity, hatred or ill-will between classes) of the IPC.

On 22 June, Devgan filed a Writ Petition under Article 32 of the Constitution seeking interim relief. It was 26 June when his petition came up for hearing, but even then Devgan had not been arrested. Instead, the Supreme Court passed an interim order staying any further action on the FIRs until the next hearing and granted Devgan protection against any coercive action.

On 7 December, while hearing a petition seeking to quash the FIRs against Devgan, the Supreme Court again directed the police to not take coercive action and said his interim relief would extend to as long as he cooperated in the investigation.

Millions saw and heard Devgan’s show when it was broadcast across India. Never arrested by police in the first place, the court even granted Anish Devgan protection against future arrest. The contrast with Faruqui’s case could not be starker. Multiple witnesses have said that Faruqui had not said anything offensive to Hindu deities on 1 January. Videos of the show attest to this. What is more, the SHO of the Tukoji Ganj police station, Kamlesh Sharma, corroborated this to The Indian Express newspaper, when he confirmed there is “no evidence against him for insulting Hindu deities or Union Minister Amit Shah”. He also told India Today, “We have examined two video footages given by the complainant. Nothing has been found to be malicious in the same.” So, not one of the multiple videos of the incident have confirmed he did anything wrong. Still, he was taken into custody by police. It is even more bizarre than his acquaintance, Khan, was arrested. While he was being taken away, a man abused and slapped Khan right in front of the police.

A video of this attack is also being shared on social media, and many supporters and members of right-wing groups have been applauding the assaulter. The police did not arrest this man either. Instead, they were recorded taking no action and breaking the law by driving off on a motorcycle, Khan sandwiched between two policemen, none of them wearing a helmet.

Khan also features in the videos of the 1 January incident, trying to control the situation and protect Faruqui. As Khan’s advocate argued that his client had been arrested on false grounds and should therefore be granted bail, the Additional Sessions Judge hearing the matter said the eyewitness accounts and video evidence showed Khan was “also involved in abusing the complainant along with others when they tried to stop the show and his name [is] mentioned in the first notice and thereby Sadakat Khan is also guilty of being involved in hurting Hindu religious sentiments bypassing objectionable remarks against Hindu god-goddess [sic] and showing objectionable articles to women and children.”

According to the judge, the accused “provoked frenzy” and that “granting him bail will lead to a law-and-order problem as a section of society will be offended”.

Interestingly, even the police argued while objecting to Khan getting bail that Khan can be seen defending Faruqui in a video.

The orders of the Indore court denying bail to Faruqui, Khan and others clearly deviate from established standards for granting bail. They fall afoul of the jurisprudence on bail as well. In 1977, Supreme Court Justice VR Krishna Iyer held in State of Rajasthan v. Balchand that denial of bail is a restriction on the personal liberty of an individual guaranteed under Article 21. He said,

“The basic rule may perhaps be tersely put as bail, not jail, except where there are circumstances suggestive of fleeing from justice or thwarting the course of justice or creating other troubles in the shape of repeating offences or intimidating witnesses and the like…”

“The consequences of pre-trial detention are grave. Defendants presumed innocent are subjected to the psychological and physical deprivations of jail life, usually under more onerous conditions than are imposed on convicted defendants. The jailed defendant loses his job if he has one and is prevented from contributing to the preparation of his defence. Equally important, the burden of his detention frequently falls heavily on the innocent members of his family.”

These principles have been confirmed and reiterated time and time again by the Supreme Court, most recently in the case of Arnab Manoranjan Goswami v. State of Maharashtra, where the bench of Justices DY Chandrachud and Indira Banerjee noted, “Courts must be alive to the situation as it prevails on the ground—in the jails and police stations where human dignity has no protector… Tasked as we are with the primary responsibility of preserving the liberty of all citizens, we cannot countenance an approach that has the consequence of applying this basic rule in an inverted form.”

The bench also pulled up the high courts and other branches of the judiciary for failing to grant bail in deserving cases. It observed that the district judiciary “may be subordinate in the hierarchy but it is not subordinate in terms of its importance in the lives of citizens or in terms of the duty to render justice to them.

High courts get burdened when courts of first instance declined to grant anticipatory bail or bail in deserving cases. This continues in the Supreme Court as well, when high courts do not grant bail or anticipatory bail in cases falling within the parameters of the law”.

Moreover, Faruqui is a stand-up comedian and practices an art form that involves exaggeration and juxtaposing facts against fiction to have the intended impact on the audience. The Delhi High Court has noted in Ashutosh Dubey v. Netflix that the liberty of a creative artist is the very essence of democracy. “One of the prime forms of exposing the ills of the society is by portraying a satirical picture of the same,” the court said, adding, “Stand-up comedians perform that very purpose. In their portrayal they use satire and exaggerate the ills to an extent that it becomes ridicule. In the humorous portrayal of the ills of the society the stand-up comedians use satire.”

WHO IS REALLY THE OFFENDER?

The arbitrary manner in which the police and judiciary in Indore are dealing with Faruqui’s case sends chilling messages and exposes unpleasant truths. It shows how vulnerable anyone with a dissenting voice is. It tells us that the right to access justice and equal protection of the law is not guaranteed to every citizen. It offends essential constitutional principles such as the rights to freedom of speech, equality and life, and personal liberty. It desecrates the bedrock of democracy and the Constitution at their very heart, and in doing so offends the millions who believe in democracy.

(Monica Dhanraj is a lawyer who graduated from NUJS, Kolkata. She has a keen interest in how the law and society influence each other. A self-confessed rationalist, she has been teaching quantitative aptitude since her second year of law. The views are personal.)