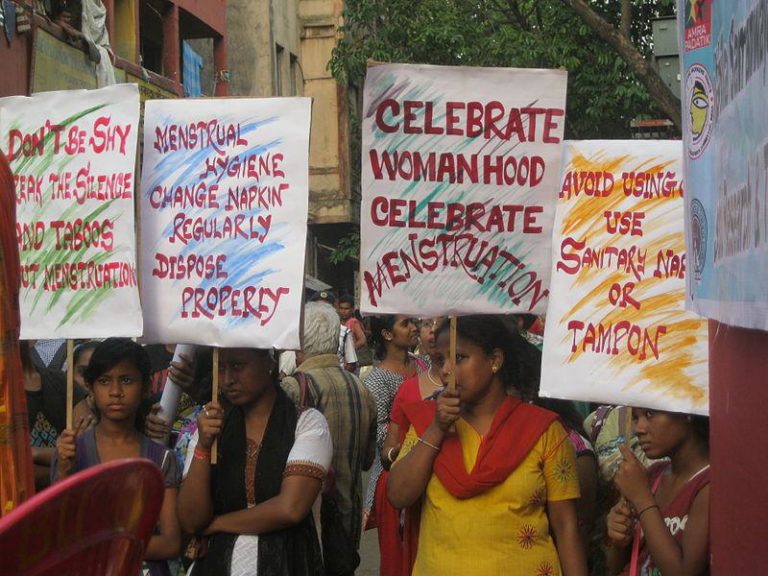 The state’s indifference to 12% GST on sanitary napkins betrays its structural misogyny, and a clutch of petitions intends to challenge it.

We all saw how the “Padman Challenge” went viral on social media in February this year. While the vision of celebrities holding up sanitary napkins in an attempt to break the taboo associated with menstruation was something to cheer for, a ripple of voices questioned the wastefulness of the exercise as mere lip-service to the cause, with the real, and hardly hidden, intention of simply marketing a film. It’s a pity that the larger issue of menstrual hygiene and accessibility is a matter yet to be touched upon by Indian celebrities. While the PM has taken to Twitter on International Women’s Day urging everyone to write about women who inspire them, it would do well for the government to take this opportunity to address these issues that affect women.

In January, the Supreme Court of India stayed proceedings in the Delhi and Bombay High Courts from hearing petitions challenging the constitutional validity of imposition of 12% Goods and Services Tax (GST) on sanitary napkins. The Court said it would examine the case and see if all the matters pertaining to it should be heard by the apex court itself, news agency ANI reported.

The petition before the Delhi High Court was filed by Zarmina Israr Khan, a Jawaharlal Nehru University PhD scholar, seeking recourse from the patently discriminatory and illegal treatment meted out to women by the imposition of a high rate of 12% of GST on sanitary napkins.  The counsel for petitioner is Advocate Amit George.

The petition before the Bombay High Court was filed by Mumbai-based NGO Shetty Women Welfare Foundation and stated that the 12% tax imposed on sanitary napkins/pads after the GST rollout on July 1, 2017 would make it even harder for Indian women to afford them.

A report prepared by AC Neilsen, quoted in the PIL filed in Bombay, clearly shows us that we are far behind on the issue of accessibility, with only 12% of India’s 355 million menstruating women using sanitary napkins. It reported, over 88% of women resort to shocking alternatives like unsanitised cloth, ashes and husk sand. Incidents of reproductive tract infection (RTI) are 70% more common among these women. The problem is so grave that inadequate menstrual protection makes adolescent girls (age group 12-18 years) miss five days of school in a month (50 days a year). Around 23% of these girls actually drop out of school after they start menstruating.

There are certain items which have been exempted from the imposition of GST with an intent to not burden the consumer, keeping in mind the nature of the item and the perceived significance to the consumer. The underlying rationale is to ensure affordability for the customer and to not discourage the use of the item concerned by taxing it. However, sanitary napkins have not been included in the fold, indicating a one-dimensional gendered view of the law.

Examples of these exempted items include kajal, kumkum, bindis, sindur, alta, plastic and glass bangles, hearing aids, puja samagri of all kinds, and all types of contraceptives, including condoms. Sanitary napkins on the other hand have been grouped with non-essential items like toys, leather goods, roasted coffee, mobile phones and processed foods amongst others items, all of which are subjected to a GST rate of 12%.

“It seems absurd that sanitary napkins which are already a commodity which is inaccessible to the masses are being so heavily taxed by the government. Menstrual hygiene is already an issue that has been neglected, the government cannot absolve itself of the responsibility,” says Nikita Azad Arora, founder of the campaign #HappyToBleed, launched in 2015 to protest menstrual taboos. “

The misogynistic stance of the government on the issue was pointed out during the hearing of the petition in the Delhi High Court when Justice Gita Mittal and Justice C Hari Shankar pointed out that the 31-member GST Council did not contain a single woman representative. The clubbing together of sanitary napkins, an essential menstrual hygiene commodity, with goods non-essential to survival, reflects the extent of the gender-discrimination of the State.

As indicated in the petition the impugned levy also makes no distinction between high-cost and low-cost sanitary napkins and taxes them on an equal footing. This is quite opposed to the differential treatment given to various goods, such as footwear, on the basis of their retail sale price. For instance, under the GST, Footwear having a retail sale price not exceeding Rs. 500 per pair are taxed at the rate of 3% only, whereas other kinds of footwear not falling within this category have been taxed at 18%.

In November last year, Union Finance Minister Arun Jaitley said that the opposition to a 12% tax rate on sanitary napkins was “ill-informed” and that Indian manufacturers would lose to Chinese products if the tax rate on them is reduced.

In the hearing before the Delhi High Court, counsel for government, Sanjeev Narula, told the court that exempting sanitary napkins from tax would put “domestically manufactured sanitary napkins at a huge disadvantage when it comes to imports”. The biting irony is that the Bench itself retorted the government was merely “playing with figures”, hiding behind half-baked “technical and statistical reasons”, betraying a basic lack of understanding of the essential nature of items. Such an indifferent stance of the government towards gender sensitive issues is once again indicative of the deeply patriarchal society that continues to see menstruation as taboo.

It’s extremely unfortunate that even though the government lowered the GST rates on more than 200 items in its GST council meeting held on November 10th, 2017, it conveniently forgot to include sanitary napkins and tampons (with the latter inviting 18% GST) in its retinue of lowered duties. One can only hope government does more than just promoting pro-women hashtags on International Women’s Day, and take substantial steps towards making access to menstrual hygiene and reproductive health a top priority for itself.