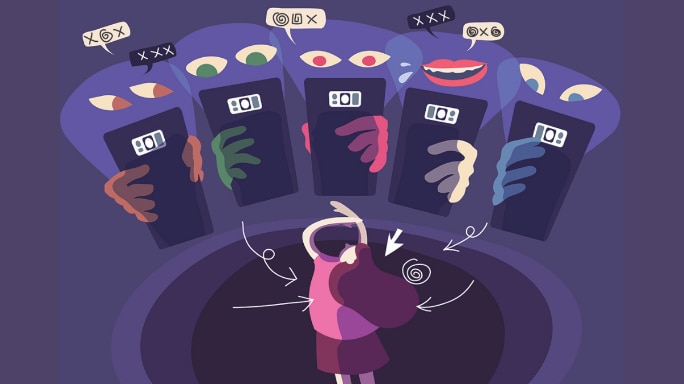 Men need not be men  – Feminism for Men, made easy

How does patriarchy affect men? Would the end of patriarchy liberate men from their socially assigned roles as much as women? The author deals with these issues in the light of the recent happening over the Bois Locker Room comments on social media. Since the matter is in court, the author makes no comment on the legality of the charge against the accused but confines her comments to the underlying causes of this anti-feminist women behaviour.

ON May 3, 2020, several Instagram Users posted stories that contained screenshots of chats from an Instagram chat group called ‘Bois Locker Room’, created by a group of Teenage boys residing in New Delhi, India.

Teenage boys were found exchanging pictures of girls (some even underage) in the group objectifying them and making inappropriate comments about their bodies. Some even went to the extent of making remarks to the tune of raping and gang-raping these women as and when they got the opportunity.

It is evident that many new age activists took to their screens and stomped on their keys to discuss and comment upon these leaked chats. While some were of the opinion that why are these so-called “Feminists” making such a big deal about this, as this is normal for men since “Men will be Men”, others questioned this extremely contentious act of the boys in this chat group.

As is the case with most Feminist Movements, either on the Streets or on the screens, for example, the #metoo movement, the whole discourse went from being how this act was wrong to “Feminists” versus “#Notallmen” (because after all, some men in the society are indeed honourable, chivalrous and absolute gentlemen). It was yet again about how these women pretending to be “Feminists (which, FYI is a terrible thing)”, are just anti-men.

Not far behind were the leaked posts about what they labelled as the ‘Girls locker room’. So, it wasn’t just the boys who were objectifying women. Young teenage girls had also actively participated in the misogynist act of body shaming fellow women. Surprisingly all the men who had not uttered a word about the ‘Bois Locker Room’ had now taken to the screens to support the cause by calling out these women. Some even directly raised questions to these social media feminists, asking them is this the feminism that we need (Clarification: this is a Feminism v Men discourse, not Feminism v. Patriarchy).

Yes, in all of this, the only thing doing a victory dance is “Patriarchy”. Lets, finally give the big guy a proper clear definition, not the oxford dictionary kind, but the one everyone can relate to and understand. Patriarchy is following and/or preaching the existence of rigid gender roles instilled within us. Such as, Men are supposed to be strong and independent – financially as well emotionally, and women have to be nurturing, expressive, weak and dependent. (Caprino 2018) A Patriarchal society puts gender relations at the center. (Lerner 1986).

Therefore, it’s patriarchy that commands our dress code, behaviour, etiquettes and most importantly our mindset. It is instilled so deep in our mind that an attack on it feels personal. Hence, the discourse is often “Feminism v. Men” even when it was meant to be “Feminism v. Patriarchy”.

But, since “Patriarchy” is really the big bad wolf, it can’t possibly be doing any good for men either right? We talk so much about the privilege that a patriarchal society showers over men, we never address the cost, which comes with bearing such privileges.

Feminism, on the other hand, is an attempt to break gender roles and norms. Feminism ensures that no human must conform to the roles defined for them. One of the biggest examples of this is Iceland, where the longevity of men is the highest in all of Europe. The simple reason behind this is that the country works on a model of gender equality. As a result, men no longer have to be “Men”. They are free to do the bravest thing there is, call their souls their own fearlessly.

(Eysha Marysha is an Advocate at the Supreme Court of India)