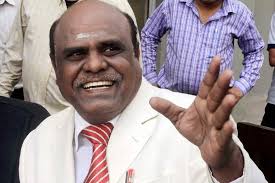 THE Madras High Court Tuesday rejected a batch of bail applications filed by its former judge CS Karnan, seeking his release in ten criminal cases against him.

The court said the sequence of the videos and the content, prima facie, showed that the petitioner had acted deliberately, knowing fully well that what he was doing was wrong and contrary to law.

“A perusal of the transcribed text of all those video contents would clearly show that the petitioner made such abusive utterances consciously and with a predetermined mind. Whenever the objectionable act of the petitioner was condemned by well reasoned persons, he used to react quickly and start abusing them in vulgar language”, the court said.

As many as ten crimes have been registered against Karnan relating to the uploading of 33 abusive videos on YouTube and Facebook. Karnan, in the videos, allegedly abused the former chief justices of the Supreme Court of India, former judges and sitting judges of the Supreme Court of India and sitting chief justices of two high courts, former and sitting judges of the Madras High Court as well as their family members with “vulgar, scandalous, vituperative and obscene words”.

The earliest complaint was filed by a practicing advocate of the Madras High Court, Devika, on 26.10.2020.

Karnan also filed an affidavit early today stating that he had committed the crime of uploading the offensive videos because of tension and a change in his temperament.

“The acts complained of were not done willfully or wantonly but due to ill health reasons,” he said in the sworn affidavit, while promising not to repeat the offence.

The court, however, refused to grant him bail.