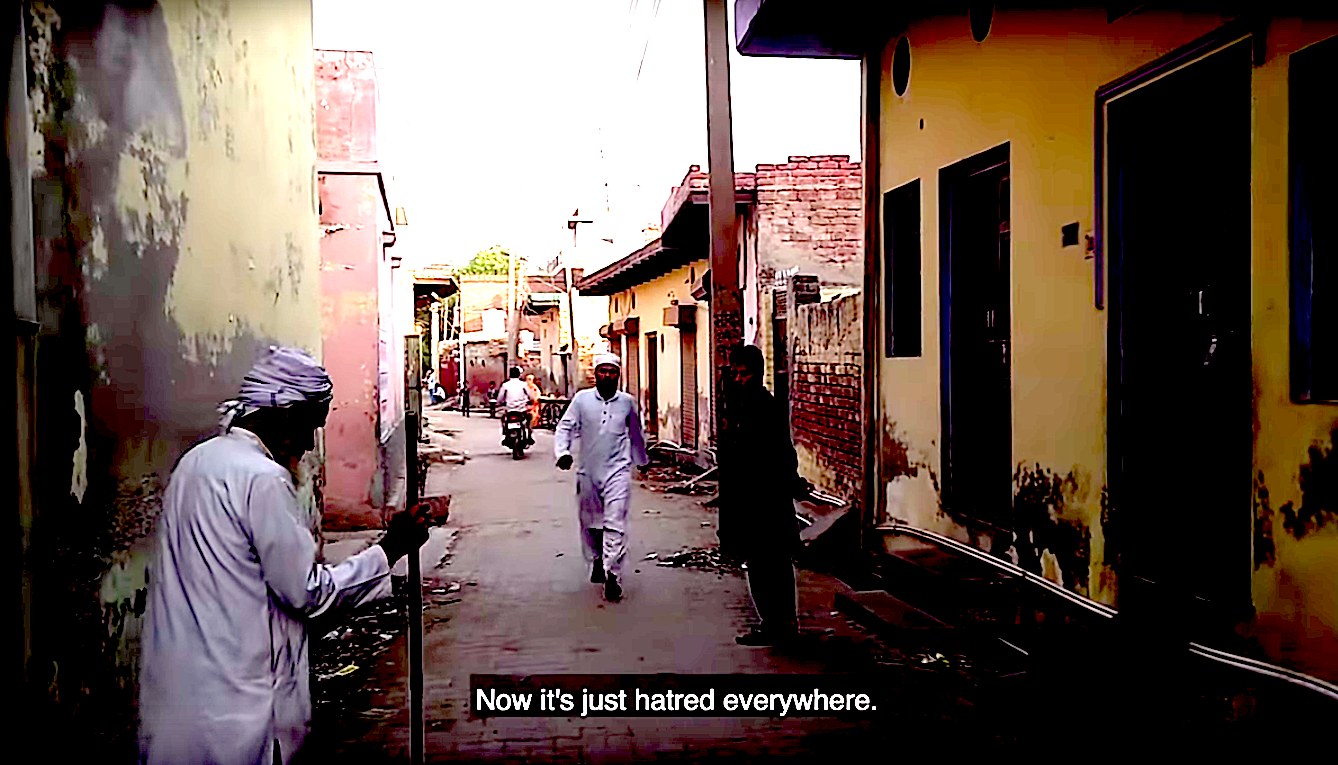 “They are only using cows as an excuse…They don’t just beat you to leave you injured (if you are Muslim). They clobber you to death.” — Maryam Khatoon, wife of Alimuddin Ansari, a cattle trader.

“But in Hindu dharma, it seems they protect the cow but killing a human is not a sin. This is the arrangement… so we don’t want to be Hindus anymore.” — Vasram Sarvaiya, formerly a leather tanner.

“Then I saw they hanged (my son and brother) on the tree in front of my eyes.” — Azad Khan, father of 12-year-old Imtiyaz Khan, a cattle trader.

“When you have a brother and you see him in this state …with no bone left in the body that wasn’t broken…his ears chopped off…he was repeatedly beaten up for no reason and dragged like a dog and thrown on to the road…his head was thrashed with bricks…How can my eyes forget such a horrific death?” —Jan Mohammad, brother of Mohammad Akhlaq, an ironsmith.

Maryam Khatoon, Vasram Sarvaiya, Azad Khan and Jan Mohammad are ordinary Indian citizens who live miles apart but their stories are inextricably linked: in the name of cow protection, their loved ones were humiliated, dragged, chased and beaten to death by lynch mobs in full public view. In the case of Vasram, a Dalit, he and his brothers were stripped, tethered to a car and flogged for doing their job: skinning a dead cow.

These agonising accounts are captured in vivid detail by Lynch Nation, a documentary by journalists Shaheen Ahmed, EJ Ashfaque, Furqan Faridi and Vishu Sejwal. It traces seven cases of mob violence in India and catapults to centre stage the families of victims whose killers and assaulters were never brought to book. The crowdfunded film’s directors, mentored by senior journalist and writer Amit Sengupta, have steered clear of political endorsements, focusing instead on the human cost of hate harvested in the name of bovine worship.

As it leaps back and forth through five states, Lynch Nation draws up a matrix of lives and livelihoods targeted by communal violence. We learn about the aspirations left behind by lynch victims — and the mundane routine of families punctuated by threats: after Maryam’s husband was lynched, their daughter stopped going to school for the fear of being attacked; Vasram and his brothers have given up their family occupation of leather tanning; Saira, the mother of Hafiz Junaid, has stopped teaching in the village after her teenage son was hacked to death; Mohd Irshad has lost his family business of cattle trade and farming after his father Pehlu Khan was lynched.

Their testimonies segue into how propaganda about “beef eaters” in India makes incensed mobs out of ordinary men. Through articulate first-person accounts of victims who hold India’s Hindu Right responsible for communally-charged mob violence, Lynch Nation also spotlights the struggle of ordinary citizens against power — the “struggle of memory against forgetting”, as Czech novelist Milan Kundera put it.

For the victims’ families, who are supposed to be given police protection but often don’t receive any, the act of speaking up has become an exercise in proving that the lynchings indeed took place. They recount and name, with remarkable clarity, the crucial sections of the Criminal Procedure Code that the police “left out” while filing FIRs against the lynching accused.

In almost every case, lynching convicts have walked out on bail. Earlier this year, the men who lynched Maryam’s husband were garlanded and feted by Union minister and BJP MP Jayant Sinha, who was credited with helping them get bail. A man accused of lynching Jan Mohammad’s brother is going to contest India’s general election to become a Member of Parliament. The six men who Irshad’s father had accused of murder in his dying declaration were given a clean chit by Rajasthan’s Crime Branch and CID.

With a restrained and journalistic approach, Lynch Nation documents the visceral fear and silent strength of families whose witness has gone unheard in the shrill of the mainstream—especially in a polarised India.

“Look at these pictures…how blood soaked the train was. Both brothers were attacked. No bystander was ready to help them,” Saira says plaintively, pointing to the complicit silence of those who witnessed the murder of her son in a train bogie.

Her testimony brought to my mind a scene from the 2008 film The Reader. Upon witnessing the court trial of Nazi guards who locked up 300 Jews and watched them burn, a German student reflects on the majority’s response to the Holocaust: “People go on about how much did everyone know. Who knew? What did they know? Everyone knew! Our parents, our teachers. That isn’t the question. The question is how could you let this happen?”

That is the searing question you may find yourself asking after watching Lynch Nation.

[Lynch Nation, a crowdfunded film, had a press preview in New Delhi. It is being screened at select, private venues across the country.]

Also read: Calling it what it is: Why India desperately needs a law on ‘lynching’