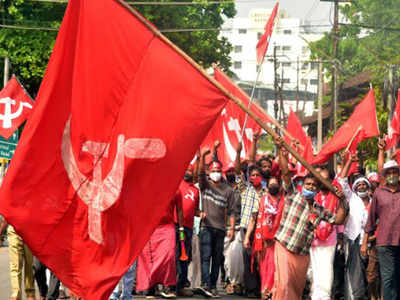 Congress led UDF gets a jolt while BJP performs below par, writes P. SREEKUMARAN from Thiruvananthapuram.

A spectacular success achieved in the teeth of extreme adversity, aptly sums up the thumping victory the Left Democratic Front (LDF) has scored in the local body elections, billed as the semi-final.

What is remarkable is that the victory has been achieved braving a vicious campaign of disinformation, misinformation and slander unleashed by an aggressive Opposition comprising the Congress-led United Democratic Front (UDF) and the BJP.

The results show that the people have rejected the pernicious propaganda of the opposition with the contempt it deserves.

A jubilant Chief Minister Pinarayi Vijayan hit the nail on the head when he said that it is a victory of the people and a victory for the secular politics sedulously practised by the LDF.

A slew of charges and allegations of corruption by the Opposition had created doubts in the minds of LDF supporters. But the emphatic endorsement made by the people has exposed these allegations for what they really are: a farrago of nonsense.

CPI-M general secretary Sitaram Yechury identified himself with the view voiced by the Chief Minister. The creditable victory represents the people’s appreciation of the good work done by the Pinarayi Government, Yechury averred.

A slew of charges and allegations of corruption by the Opposition had created doubts in the minds of LDF supporters. But the emphatic endorsement made by the people has exposed these allegations for what they really are: a farrago of nonsense.

The verdict has come as a big morale booster for the LDF which has bagged 10 out of 14 district panchayats, 108 out of 152 block panchayats, 514 out of 941 Gram Panchayats and four out of 6 corporations.  The Cassandras and the doubting Thomases who predicted perdition for the LDF have been put in their places.

A variety of factors worked for the LDF. First and foremost were the development initiatives of the Government and the rafter of people-friendly welfare measures it took despite the financial crunch.

Secondly, the alliance with the Jose K Mani’s Kerala Congress(M) helped the LDF to end the dominance of the UDF in central Kerala, especially in Kottayam, Pathanamthitta and Idukki districts.  The credit goes to the Chief Minister who took the lead in stitching the alliance with Jose K Mani’s KC(M) despite stiff opposition from within and outside. The Jose factor proved the clincher for the LDF – a fact acknowledged by even the CPI which had reservations about the entry of the Jose to the LDF.

The decision to field a large number of candidates as Independents went a long way in offsetting the anti-incumbency factor.

It may sound a bit cliched, but it is a fact. The free food kits distributed by the Government also proved to be a big hit with the people.

The decision to field a large number of candidates as Independents went a long way in offsetting the anti-incumbency factor.

Last, but not the least, is the politics of communalism that was openly indulged in by the UDF. The UDF’s tie-up with the Welfare Party of India, the political wing of the Jamait-e-Islami, was rejected lock, stock and barrel.

Conversely, the UDF erred badly in evolving its electoral strategy.

The UDF bungled badly by not focusing on issues that affect the day-to-day life of the people, which matter the most in local body elections.

It’s local ‘adjustments’ with the Welfare Party was a political disaster. It was frowned upon by the enlightened electorate of Kerala.

Besides, the UDF overplayed the corruption card. Its unrelenting campaign on the gold smuggling case and corruption left the voters cold. The UDF bungled badly by not focusing on issues that affect the day-to-day life of the people, which matter the most in local body elections.

The open show of disunity among the top Congress leaders also sent a wrong message, and only helped alienate traditional voters.

The only saving grace for the UDF was the good show in bagging more municipalities than the LDF. But the huge setbacks in district panchayats and block panchayats proved the proverbial spoilsport.

The UDF leaders may deny it. But the fact is that the exit of the Jose Mani faction of the KC(M) badly depleted the UDF’s vote base, especially in central Kerala, where the front fared poorly as a result.

Last but not the least, the UDF must address its main problem: organizational weaknesses which was pitilessly exposed in the local body elections.

Reports have it that they have already sought a leadership change in the State. BJP state chief K Surendran’s autocratic style of functioning was a major factor behind the BJP’s dismal show.

The silver lining to the black cloud is the good show put up by the Indian Union Muslim League (IUML), the second most powerful constituent of the UDF. But it portends ill for the Congress.

The increased clout of the IUML means the diminution of the Congress stature and standing within the UDF. The UDF must do serious introspection if it has to do better in the Assembly polls, due in May next year.

As for the BJP, its performance fell far short of its expectations. The party had hoped to achieve a three-fold rise in its tally. But it has managed to increase the number by a measly 400 wards.

The poor performance will of course put the state leadership under pressure. Reports have it that the dissidents, who were lying low, will now assert themselves. Reports have it that they have already sought a leadership change in the State. BJP state chief K Surendran’s autocratic style of functioning was a major factor behind the BJP’s dismal show.

The spectacular verdict will undoubtedly strengthen the position of Pinarayi. By pulling off a remarkable victory against heavy odds, the Chief Minister has silenced critics both within the party and outside.

In conclusion, it must be said that the assembly elections will offer a sterner test. The issues will be different.

Therefore, the Government cannot afford to lull itself into a false sense of complacency. It must improve its performance during the remainder of its term.

The Government and the CPI-M must curb the penchant for kicking up controversies and apply the correctives wherever necessary. That way lies roadmap for a second term in office. (IPA)

(P. Sreekumaran is a journalist based in Kozhikode. Views are personal.)