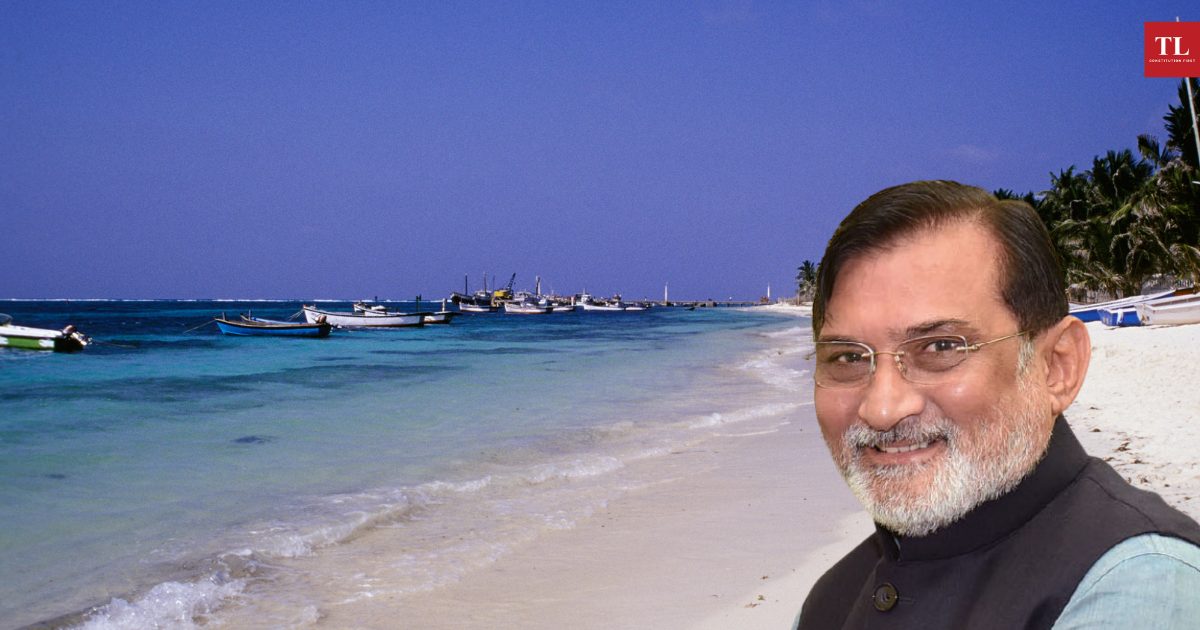 As opposition to the central government’s move to unleash a series of new laws designed to be more tyrannical than helpful for the residents of Lakshadweep picked up, Union Home Minister Amit Shah has said that nothing would be done without the consent of the local population. BJP leaders in Lakshadweep have resigned in protest against the authoritarian ways of the administration and even the local MP, Mohammed Faizal, had called for the removal of the administrator, Praful Khoda Patel. With his controversial decisions, he has set off a political tornado with the locals demanding his immediate removal. Despite the assurance of the Home Minister, residents are uneasy and feel that the small islands will no more be the same and their peaceful lives would be a thing of the past, writes RAMESH MENON

AS COVID-19 ravaged each and every state in India, Lakshadweep was one union territory that was untouched by the tragedy as there were no cases. The archipelago of  36 tiny islands that make up Lakshadweep was as calm as ever as people went about their simple chores of fishing and other mundane activities. The local administration had ensured that the area was safe as they followed strict norms and kept outsiders at bay. Those visiting Lakshadweep had to go through COVID detection tests and then be quarantined for 14 days to make sure that the virus would not spread.

But everything has changed today with Lakshadweep grappling with over seven thousand COVID cases as of May 30, 2021. For a total population of around 65,000, spread over ten islands, this is serious. Lakshadweep has just three small hospitals and even basic health facilities in the islands are absent. The sick often have to board ships to take them to Kochi in Kerala that has an excellent health infrastructure.

Who is Praful Khoda Patel?

Praful Khoda Patel was handpicked by New Delhi as he was a trusted aide of Prime Minister Narendra Modi and Home Minister Amit Shah.

In fact, when Shah was jailed in the alleged Sohrabuddin fake encounter case when he was Gujarat’s Home Minister, the ministry was handed to Patel.

But, it is only now that his name has hit the headlines. His claim to fame has been a series of administrative decisions that he made overlooking the local leadership and implementing what he wants in an autocratic manner.

Also read: Once upon a time in Lakshadweep…

What has Patel done to anger the public of Lakshadweep?

One of the first things he did after taking over was to curtail the powers of the panchayat. Then, he brought crucial departments under his wing like health, animal husbandry,  education, and fisheries.

Lakshadweep was the only place in India that was free of COVID. It would have stayed that way as the local administration last year ensured good COVID protocol to protect its residents. When Patel came in, he removed the restrictions like mandatory quarantine for travellers coming in from Kochi. Today, Lakshadweep has over 2,000 active cases.

Take a look at the contentious extraordinary regulations Patel wants to implement:

Faseela Ibrahim, a lawyer from Minicoy islands in Lakshadweep, told The Leaflet: “These regulations are in the draft stage and the most contentious is the Lakshadweep Authority Regulation, 2021. This will help the administrator to evict people from their lands when he wants. He will also have the right to declare any area other than the cantonment as areas earmarked for development would decide. It does not take into consideration the rights of the people. And these actions cannot be challenged in court. It violates the private property rights of the indigenous tribes.”

Why had he done all this?

Patel says that he wants to transform Lakshadweep into an attractive tourist destination so that people do not have to go to the Maldives and can instead opt for the archipelago. Even if that is the case, why does he want to ensure with a notification that those with more than two children would be ineligible for panchayat positions?  How is that connected with tourism? It is a reasonable guess that Patel is just implementing right-wing agenda as Lakshadweep has a large Muslim population – over 95 percent. If you look at population growth data for all regions of India, you will realise that Lakshwadeep’s population growth rate is not only lower than the national average but one of the least among all states and union territories in India. But as the propaganda goes that Muslims are exponentially multiplying, this seems like a good thing to right-wingers. Again, banning beef also sounds good to them as Lakshadweep has a majority Muslim population which is almost 95 percent. But islanders say that the beef ban is just to distract mainland India from looking at the other regulations that they are trying to bring in.

Are all these restrictions and regulations required to sculpt a strategy to develop tourism?

It is a great idea to develop tourism in Lakshadweep as it will help the local economy to grow and prosper. But there has to be a better way to do it. The locals have to be taken into confidence and convinced that it is for their good and they too would have ideas on how it can be best done. But as consultation is not one of the things that the central government has excelled in any project that involves livelihood or the future of the people, this comes as no surprise.

With the growing ambitions of China and its influence in the region, Lakshadweep does need attention. It can be an important defence base. It is a poorly developed area that is screaming for attention, but not the attention of this kind. It does not need stringent laws like the Prevention of Anti Social Activities Regulation, 2021. It is one of the most peaceful places in India and its culture and aspirations of the local populace must be respected. Not steamrolled like this.

Also read: Untrammelled Power by Lakshadweep Administrator is Against Democracy

If land is to be acquired for the construction of hotels and tourist resorts, it must be done keeping all ecological considerations above everything else as the biodiversity of the fragile islands would be destroyed. Says Faseela Ibrahim: “The government talks of developing Lakshadweep on the lines of Maldives and that is unrealistic. We fear that it will have determinate effects on our fragile coral reef ecosystem.”

The archipelago is severely water-stressed and increased tourist arrivals will mean usage of more water. No one is talking of that today.

Desalination plants are the only answer but that is going to be prohibitively expensive not only to build but to maintain.

Tourism will work there for just around seven to eight months as in the remaining months, the sea would be very choppy and the weather would be rough. Balancing the budget to cater to the tourist season and keep things going in the off-season is going to be a challenge.

The centre needs to urgently step in to stop Patel in his tracks as none of his moves has resonated with the locals. If Patel wants to bring in development, he has to do it with the consent of the populace, respect local sentiments and aspirations before protests take an ugly turn making the most peaceful area in India into a living hell.

(Ramesh Menon is a senior journalist, documentary filmmaker, educator, and editor of The Leaflet. The views expressed are personal.)