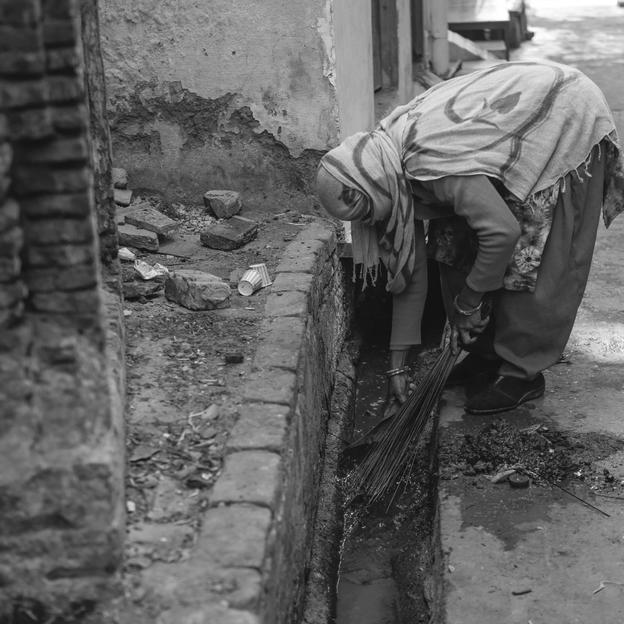 NEHA KUMAR talks to Pragya Akhilesh in Ahmedabad, Gujarat, while she is on a country Union Tour to assess the toilets in semi-urban and rural areas in India.

In 2018, Trade Unionist, Pragya Akhilesh, popularly called “Toilet woman of India”, recorded more than 10,000 abandoned toilets in the rural areas of India where women were forced to be manual scavengers in both the banned dry and the recently built sanitary latrines under Swachh Bharat Abhiyan, Indian government’s much-applauded policy.

In the last decade, through the Shramic Fund and Safai Karmachari Mitra, Akhilesh has built a model of alternative micro-credit facilities for the rehabilitation of the sanitation workers in the country. “Immediately need to take back the Open Defecation free status of these places. ODF tags act as a burden for sanitation workers in this country,” said Akhilesh.

Akhilesh points out that while much emphasis has been given to the construction of toilets, it is noteworthy that both the sanitation workers and manual scavengers in India suffer immensely because there are no safeguards to protect them. In 2021 if we are to ask every sanitation worker who has ever cleaned the toilets, they would say that they have manually scavenged these toilets mostly in rural areas because of no maintenance and lack of water supply.

In most of these toilets, you will also find that either the tap is not working or the drains or clogged so the official records of how many toilets have been made only look good on the paper as they become a liability for the sanitation workers after a year or two of working properly.

The institution is so deep that both the caste and socio-economic reality do not give any exit from this work and therefore an integrated approach for rehabilitation from scavenging becomes a difficulty.

Recognition of sanitation workers as most valuable primary resource

Akhilesh points out that it is important to first recognise who the sanitation workers are and to involve them in the policy process regarding them.

She says that in India the government’s actual expenditure through the SRMS Schemes (rehabilitation scheme for manual scavengers) is far less than the total Scheme budget.

Since the government does not have an accurate database of sanitation workers, provision of financial assistance or pension services do not take place at the grassroots because they do not know where to find these accounts. “Who will the centre give machines to or rehabilitate if they don’t even know who the manual scavengers are?” she asks.

Secondly, the non-availability of any other micro-credit facility makes the entire process complex since the NSKFDC Schemes (undertaking to provide aid to the scavenging community) are difficult to comprehend. Taking loans from different institutions binds them further within the system so assistance took to get away from this work re-perpetuates entry back in the same work. The only difference is that the working categories change sometimes.

Different challenges for both men and women

Due to double discrimination, she says that for women it becomes twice as hard to leave this work and rehabilitate themselves because they find themselves between both the intricacies of caste and gender oppression. Around 75 percent of all the women involved in this work are women. It may seem that the dry latrines do not exist anymore. However to know that one just has to ask activists like Bezwada Wilson and the organisations like the Safai Karmachari Andolan who have worked steadfastly to get dry latrines demolished in the country.

The rehabilitation part becomes the most valuable in this regard and hence the need to form a Self Help Group or a Trade Union so the sanitation workers can depend on each other and act as a pressure group to find against the government. They not only assert their need for an increase in their wages but also organise public hearings on each sewer death.

Rehabilitation follows both restoration and filing for compensation

After each death, Akhilesh says, families are left to fight for themselves. In this way, every single meal becomes a problem. At this time the workers need a process of hand-holding.

Therefore the communities themselves ask for intervention. The process begins after filing for compensation. They are not only in need of seed funds to open a small enterprise but also assistance in small areas like journal entry or registration. In most cases, such is the condition in India that workers fear police harassment in case of filing a complaint. Here, even psychological assistance and a need for evaluative rehabilitation play a great role in re-engagement after the loss of their immediate family member.

Sometimes, a protest song or a play goes a long way in this realisation as when the family sees the reenactment of what has happened through an act, it convinces them to file a complaint. This was seen in our 2012 Campaign, Khamosh! Bhim Jaari Hai (Silence! Ambedkar is in Order) inspired from Vijay Tendulkar’s work. Both cultural rehabilitation and self-help groups become important systems of emotional nourishment.

Akhilesh says that even in 2021 sewer deaths are a reality and the women continue to work in both dry latrines and sanitary toilets abandoned to become dry latrines. Until this ends both rehabilitation and the need for alternative micro-credit assistance will go hand in hand. Authentic sanitation systems cannot be secured without a mechanism of long-term and regular water supply. Sanitation cannot be addressed by burdening the sanitation workers. Says Akhilesh: “Do not care about the title, every sewer death needs to be taken seriously.’ Rehabilitation should be qualitative more than quantitative.”

Neha Kumar is the head of the working committee & Sabha Zaidi is the Delhi coordinator of Bahujan Doctor’s Association, Delhi. The views expressed are personal.)